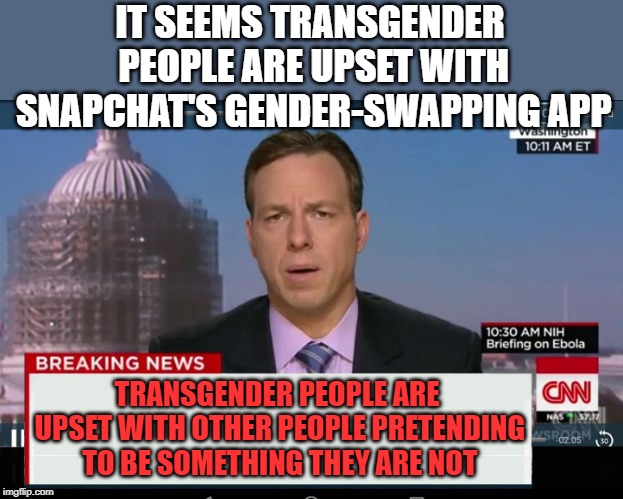 Due to the constant censorship by the mods, I have decided to leave Imgflip. I am done with my memes being unfeatured because someone doesn't agree with my position or has no sense of humor.

The latest case of this has made me realize that censorship in any form is an attack on free speech.

The Mods unfeatured this meme saying it was harassment. I don't see how that is so since it is from a headline in the news.

If you wish to follow my memes, I will be posting in the politics section on 9gag.com.

I have enjoyed my time here and I want to thank my friends and even some of the people who don't agree with my politics but were polite and were willing to discuss some of the issues that need to have an open dialogue.
SydneyB
19 ups, 3y,
2 replies Zoom in on the first word on the third line. That Snapchat reference may be the culprit.
deadboxprime
1 up, 3y,
1 reply
Not saying you're wrong, but what is the problem with that? Are we Not Supposed To Know that Snapchat exists?
VagabondSouffle
1 up, 3y
Just that mentioning them in that manner in a caption, given how touchy some companies are.

There are memes posted all the time complaining about trans and transgender and transexual and transgender, some rather harshly. How is it that even those characterizing the Obamas in such a way aren't censored?
deadboxprime
1 up, 3y,
1 reply
The sites users lean towards the right. There may be some alt right users, there may some views expressed that intersect with the alt right. IMO, the site isn't alt right and alt right views are not the norm.
VagabondSouffle
1 up, 3y
It could be that the alt right had been drowning out less extreme voices (by design, obviously) and thus seemed more of a majority.

Lately either they've toned it down a notch (some by leaving, some by getting more involved in actual discussion), or I've just gotten used to tuning them out or just more peacable with a few myself.
AvgJoe
13 ups, 3y
Sorry to see you go. You’re a great memer that adds a lot to this community. Imgflip’s management should really stop and take a long, hard look at themselves and ask themselves if they really believe they can stop what people ‘think’ and what they can ‘say.’ You did not threaten anyone. You merely satirized a hypocritical situation. That’s what memes are for! As long as imgflip censors views that they are personally opposed to, they are also limiting themselves as a business and their usefulness to the world outside their own bubble.
[deleted]
12 ups, 3y,
1 reply
capt6550
10 ups, 3y,
1 reply
9gag.com is another meme site.
RedBarron1
7 ups, 3y,
2 replies
just signed up
MichiganLibertarian
6 ups, 3y
I'm thinking of making a 9gag account
Elect_Elvis_Is_Dead
4 ups, 3y
Same here
MichiganLibertarian
9 ups, 3y
ArcMis
7 ups, 3y,
1 reply
sad but understandable.
all the best to you.
I was thinking the same lines lately ( & took a peek at reddit).
just want to complete the million before I make up my mind.
VagabondSouffle
2 ups, 3y,
1 reply
A few months ago you posted a meme about maybe not staying for other reasons?
People did not want you to leave then, so I'd doubt they'd want you to leave now.

There are some from here who've left to other sites only to come back, regretting leaving, yet unable to regain their footing.
ArcMis
5 ups, 3y,
1 reply
I don't recall posting a meme about leaving imgflip but I had a months break right after DashHopes left (apparently due to moderation issues)
VagabondSouffle
1 up, 3y,
1 reply
My memory is crap, was 2 or 3 months ago or so, so my mistake.

I was going to comment on that meme but hesitated because I thought that person would think I was just trolling them. Then I forgot how the meme looked, so no returning to it.
ArcMis
4 ups, 3y,
1 reply
just browsed my submissions 6 months back
this may be the only one remotely related
imgflip.com/i/2s8wt6
VagabondSouffle
1 up, 3y
Didn't mean to have you go search through all that.

That is a beautiful pic, sadly for the mouse.
JakkFrost
4 ups, 3y
When did they start giving reasons for a meme being unfeatured?

In any case, sorry to see you go, good luck at 9gag! I may go there some day, but I'm not a person who's good with change.
Claybourne
3 ups, 3y
Whats ur 9gag acc
SPARTAN-A259
1 up, 3y
Perspicacity
12 ups, 3y
What a shame, one of the most prolific memers on this site and in the top 30 in points. I think the relevancy of this site may be coming to an end.
SydneyB
12 ups, 3y,
3 replies
If we all make DJ Fox go away, will you stay?
capt6550
13 ups, 3y,
2 replies
I have no problem with being trolled or people disagreeing with me, that is what this site was supposed to be for.

It is censorship I have a problem with. If the meme is not featured, you can't even begin to have a discussion. I have never called for violence and rarely even insult anyone by name.
SydneyB
11 ups, 3y
I was just joking but yeah, never seen you do anything untowards. But you did poke 'the protected class'

Not many view it, but it's a censorship free zone here: imgflip.com/m/Old_Imgflip
pureserenity524
3 ups, 3y
Love your work and humor. You're not alone in the not being featured bull. Best wishes!
ArcMis
7 ups, 3y,
1 reply
LOL
VagabondSouffle
2 ups, 3y
I don't see the DJFly zipping around the rear end.
VagabondSouffle
3 ups, 3y
[deleted]
10 ups, 3y,
1 reply
It's sad to see you leave, but I totally understand. I have had a lot of problems with censorship on other social media sites like Facebook and YouTube. I quit Facebook and may even quit this site soon. I stopped posting a lot of political memes because they seem to be taking longer and longer to feature. They used to feature in about an hour, but now they take 3-6 hours to feature and no one sees them.

When they separated the politics from the fun section and all the streams started popping up, I left for about two weeks with not even a "goodbye" to anyone and no one seemed to notice. I came back, but haven't been posting as much as I used to because it isn't fun anymore. Censorship is bullshit and every major social media platform is doing it now.

I hope you have better luck on 9gag.
VagabondSouffle
1 up, 3y
You can't leave imgflip, so don't be a poop.

I had noticed you had gone MIA but just figured you were sticking to Fun, since you mentioned something along those lines once (I think?).
I tend to go to memes haphazardly, by following memers from one to another, rather than the front pages, so I don't notice all the latest going ons.
Stavka100
9 ups, 3y
I'll miss you, enjoyed the heck out of your memes and comments. Be well!
Nixie.Knox
8 ups, 3y
I always enjoy your memes. It's ridiculous that what you mention ever happens. That may be the reason others have also left. Will you be deleting entirely or just taking your business elsewhere?I will visit the website you mention.
deadboxprime
7 ups, 3y
Very sorry to see you leave, capt, but I respect your decision.
DrSarcasm
6 ups, 3y
OberstGylbert
6 ups, 3y
enochthewatcher
5 ups, 3y
[deleted]
7 ups, 3y,
1 reply
OberstGylbert
3 ups, 3y
Good riddance
norsegreen
5 ups, 3y
Sorry to see you go :(
RedBarron1
5 ups, 3y
imgflip.com/i/31vjvy
GabrieltheHumblePatriot
5 ups, 3y
Wherever life takes you, keep your head up and your fist in life’s throat. Don’t give up.

Sad to see such a madlad go. But if it’s your time, it’s your time. Hope you’ll come to visit soon.
LordCheesus
5 ups, 3y
Shame to see. Ridiculous to not show content because someone else disagrees with it and Doesn’t want to open up a discussion about it.
Hope to see you back at some point.
[deleted]
5 ups, 3y
I'm still not sure if you're a clown steering the conversation with your A+ memes (this one being another scheme) but I will say this: you're a damn good conservative memer and I will miss your kekful content.

Ps:
Assuming you're not part of the circus, you should investigate imgflip. Things are not what they seem. Your (and many others) censorship barely scratches the surface.
WayneUrso
4 ups, 3y
The censorship is shameful!
[deleted]
4 ups, 3y,
3 replies
ArcMis
7 ups, 3y
rather look what you have turned into the last weeks/ months.
just saying.....
SydneyB
6 ups, 3y,
1 reply
Did you mass flag him?
[deleted]
2 ups, 3y,
1 reply
SydneyB
2 ups, 3y,
1 reply
Okay. Good.
[deleted]
2 ups, 3y,
1 reply
SydneyB
2 ups, 3y
I really wish people didn't flag memes. I only ever do it for wrong stream memes in politics. I don't even flag the current rash of hateful lefty memes we've seen lately.
RedBarron1
5 ups, 3y,
1 reply
how did capts compare to Purgeboy? no comparison in my eyes and yet he(pb) got thousands approved and many legit ones of others did not. that is my complaint too. I stopped making political memes, most of my posts lately were older ones, why put any effort in if they wont be approved
[deleted]
5 ups, 3y,
1 reply
RedBarron1
7 ups, 3y,
3 replies
Its a mod or pals with a mod or someone hacking a mod to get approval.my bro is 100% sure on it. Its all greek 2 me but he is a pc engineer/code/electrician etc. and used to do work for a game called "unreal tournament" he knows his stuff.
ArcMis
6 ups, 3y,
2 replies
purgeboy is a liberal MOD smolletting (my 2 cents)

My Brother says no, the CIA would have actual security and no sense of humor. lol
ArcMis
3 ups, 3y,
1 reply
imgflip CIA thats BS

but conspiracies is where you eventually come at because there's no transparecy
RedBarron1
3 ups, 3y
yea was jk
Raydog
3 ups, 3y,
1 reply
[deleted]
1 up, 3y,
2 replies
Raydog
3 ups, 3y,
1 reply
I mostly just played the Deathmatch option...Wish I still had it. I had some really good player made maps and some good mods.
[deleted]
1 up, 3y,
1 reply
Raydog
3 ups, 3y
That's cool...I played the original Unreal Tournament (1999) and Unreal Tournament 2003...didn't even know about all the rest of them.
ICU
0 ups, 3y
tmi
VagabondSouffle
1 up, 3y
It was one person, now there's copycats. There are also those who have no clue about him yet are attributed to him. One of those is Tedog (hope I spelled that right), who is obviously former user NukeMecca and NOT Purgboi yet had been falsely identified as him after being here under that name for months.

I've been referred to Gab to take a look, where talk about him and the goings on here occur. Tons of the "Don't call me racist" set from here being openly racist there. Purboi is a joke, one that would totally fly beneath the radar and fade into obsolescence if people just stopped giving him attention. "Octo" has become a slang word there.
Show More Comments
Flip Settings