19,433 views • 164 upvotes • Made by anonymous 3 years ago
memesshort satisfaction vs truthpolitics 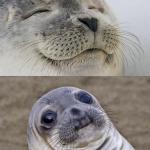 Glad you liked it. My front page meme just got downvoted back to submission. It had 171 upvotes and over 110 comments. Second time in a couple weeks my front page meme got sent back. lol
[deleted]
6 ups, 3y,
1 reply
To get downvoted back to submission-does that mean you got more than 171 downvotes? I’m sorry that happened to you- some people are just unhappy with their lives and hates seeing others happy, popular, successful, etc :(
[deleted]
8 ups, 3y,
1 reply
Not usually. It has to have a certain percentage of downvotes compared to upvotes. For example, the meme I had on the front page had 170 upvotes when it was sent back. It probably had at least half that in downvotes. Maybe somewhere in the 75-85 downvote range.
[deleted]
6 ups, 3y,
1 reply
I think it would be interesting if we could know who voted what - like on Facebook :-)
[deleted]
6 ups, 3y
The site used to have an upvote/cownvote bar and showed all the downvotes. That's what I wish they would reinstate, but that won't happen. As for seeing who upvotes and downvotes, I wouldn't want that.
Modda
3 ups, 3y,
2 replies
There's no way downvoting did that. Otherwise there wouldn't be this constant storm of near identical political troll memes even making halfway there.

Same with comments, those percieved as leftos have a far greater chance of getting low rated, ditto for their memes. Only the most rancid of antagonistic alt right comments get hit that way.

The meme must have stolen, or there was some other reason the mods took it down.
Every single memer who complains about this always have a bunch of borrowed and not captioned here. Even after they're told, they still do it.
[deleted]
4 ups, 3y,
2 replies
The meme in question was original as far as I know and I am not complaining about it. I like the fact someone reported it. The more of you people I piss off, the better.
chosanwan
1 up, 3y
Modda
1 up, 3y,
2 replies
I meant stolen as in no original caption posted on it onsite, as explained by a mod here:

Was giving you a possible explanation, if that's a call to butthurt, that's on you.
[deleted]
7 ups, 3y,
1 reply
You're misinterpreting this meme. This has nothing to do with me, just thought it was funny. And apparently enough users thought it was since they took it to the front page.
Modda
1 up, 3y,
1 reply
Hence YOUR caption:

"I'LL JUST POST MY POLITICAL OPINION ON IMGFLIP AND I'M SURE EVERYONE CAN HAVE A NICE, CALM DISCUSSION

I WAS CALLED STUPID AND APPARENTLY I'M A DUMB RETARD"

And you WERE called that by, what was it, two memers, more? Today as well,,,
[deleted]
4 ups, 3y,
1 reply
I'm explaining this to you one last time. The meme itself is loosely based on my experience, but the meme is NOT about me, but about generality. The reason it's doing so well is because many memers can relate to this. The meme is not about me.

Derp.
Modda
0 ups, 3y
"The meme itself is loosely based on my experience, but the meme is NOT about me"

You're not really pretending to be an idiot, are you?
SlimPickens
1 up, 3y,
1 reply
Interesting how many deleted accounts are associated with comments on the link you referenced. There is almost a pattern in that series. Hmmm
Modda
1 up, 3y
I just checked to make sure. "Deleted User" is just one account, Swiggy.
There was another meme thread that was linked to this, so our back and forth was more extended, but got harsher in this one....
Modda
0 ups, 3y
making it*

For example: Terri Lynn Rote was sentenced to two years probation after being caught voting for Trump twice. That's evidence. Do you have any?
Taleladar
0 ups, 3y
As respectably rational and patient as you are being, I just can't be assed to do work you could and should just be doing yourself.

NOPE
xeeeg7qbnw
0 ups, 3y
So by your retarded logic, if I make a claim and provide no evidence, it's somehow YOUR responsibility to research it?

This meme was more of a joke about how political memes trigger everyone and turns them into different people (trolls and bullies). I think it's humorous. I've gone in a different direction on the site. Many of my memes are now political. I'm making enemies. ;)
Lynch1979
6 ups, 3y,
1 reply
lol my first meme in forever made front page yesterday. Actually it's a demotovational. I've been so busy! Still working 3 jobs and taking care of 3 kids lol but as fall comes in I'll have some free time so I am going to try to meme a little.
What's life without a few enemies??? I'll have to go check your profile out!
[deleted]
6 ups, 3y,
1 reply
Yeah, I've gone through a lot of my memes and have seen a big change in how I meme. And my enemies are growing. lol!

Yeah, I saw your meme. I didn't realize it was yours and when I came back to it later, I saw your name. Thought it was someone else with the same name and saw that it was you. lol
Lynch1979
6 ups, 3y,
1 reply
Lol there is only one real Lynch!! Hahaha

I've missed being around. My sense of humor has changed a little in the last year. I may not go over well either.
[deleted]
5 ups, 3y,
1 reply
I feel so old on this site. There are only a few users around when I started, but they don't really post much anymore and the site has definitely changed a lot. I know it's what always happens with things that have been around for a while. Glad to see another old time user here. :)
deadboxprime
1 up, 3y
Keep posting political memes. The subject matter isn't the problem. Politics should be discussed, especially by those who disagree. The problem is people who cannot disagree without namecalling and insults. That's a behavioral issue not a political one.
Show More Comments
Flip Settings

Caption this Meme
Created with the Imgflip Meme Generator
IMAGE DESCRIPTION:
I'LL JUST POST MY POLITICAL OPINION ON IMGFLIP AND I'M SURE EVERYONE CAN HAVE A NICE, CALM DISCUSSION; I WAS CALLED STUPID AND APPARENTLY I'M A DUMB RETARD
hotkeys: D = random, W = upvote, S = downvote, A = back
Feedback