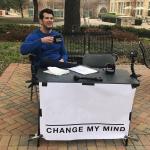 This is why people say he is a bad president even though they KNOW they're wrong
Modda
2 ups, 4mo 1forpeace
5 ups, 4mo
Upvote! Putting policies above people...why would I want to change your mind?
Serenity_Now
6 ups, 4mo,
1 reply
Upvoted, because liberals are evil. So evil, that they don't think they are evil.

Are you drunk, or taking illegal drugs?

Liberals
Are
So
Evil
That
They
Don't
Think
They
Are
Evil.

Maybe your concern is for the liberals that are evil and KNOW they are evil. OK, I will give you that- I did paint with too broad a brush this time. As a matter of fact, I think many liberals DO know they are evil, and they enjoy it.

Which is one of the things that makes them evil . . .
Octavia_Melody
3 ups, 4mo
"Are you drunk, or taking illegal drugs?"

"Liberals
Are
So
Evil
That
They
Don't
Think
They
Are
Evil"

I could say the same thing about conservative Christians

"Maybe your concern is for the liberals that are evil and KNOW they are evil. OK, I will give you that- I did paint with too broad a brush this time. As a matter of fact, I think many liberals DO know they are evil, and they enjoy it."

Something to remember is, which is super important, we as conservatives are evil as well. If you begin thinking it is ONLY their faults, we become dangerous...
TommyMac
2 ups, 4mo
PragerUwU
1 up, 4mo
Democrats are the root of doing f**k all.
tRump_needs_a_diaper_change
2 ups, 4mo,
1 reply
since you probably believe god created everything, he would be the creator of the root of all evil.
Tater1738
3 ups, 4mo,
3 replies
God did create everything but the Bible says he is not the maker of evil. When God cast satan out, satan made evil because he was the first to disobey
Octavia_Melody
2 ups, 4mo
The Bible says god does create evil
Modda
1 up, 4mo,
1 reply
Wrong. It was the opposite, and it says he does. Read the Book again.
PRO TIP: "Jealous and wrathful" Gods tend to not rank that high on Hugs-o-Meter
Tater1738
1 up, 4mo,
2 replies
he didn’t create evil but it does say he allows it to happen because he uses it as a test to see what we do. Will we turn to him or cave in to the fear?
Octavia_Melody
2 ups, 4mo
He did create evil

Satan is not even mentioned in it for starters, and it was the mean nasty other God that cast them out and has ruled the world in what? ever since, cursing them with original what?
Tater1738
1 up, 4mo,
2 replies
the serpent in the garden, was satan!!! And there is no other God. Just 1
Octavia_Melody
2 ups, 4mo
Genesis doesn't say that
Modda
0 ups, 4mo
No, the Serpent was NOT Satan, that's why he's not called Satan.

"In our image" and all that stuff is plural for a reason.
tRump_needs_a_diaper_change
2 ups, 4mo
they should make a movie of that.
low rated comment (click to show)
Slobama
2 ups, 4mo,
2 replies
Serenity_Now
5 ups, 4mo
www.magapill.com
Bluessol
3 ups, 4mo
Pfft, you are hilarious lefty
low rated comment (click to show)
whistlelock
2 ups, 4mo,
2 replies
Dodgers4TheWin
5 ups, 4mo,
2 replies
Trump created the “Ending the HIV Epidemic: A Plan for America” initiative. It provides free medication, which could run up to as much as $20,000 per patient, per year, for 200,000 individuals each year through at least Dec. 31, 2025.

He announced during Pride Month in 2019 that his administration was launching a global campaign to end the criminalization of homosexuality.

Under Trump, Mary Rowland, a member of the Lesbian & Gay Bar Association of Chicago, was confirmed in 2019 as a federal district judge for the U.S. District Court of Northern Illinois. Additionally, Trump pick Patrick Bumatay, an openly gay Filipino American judge, was confirmed to the influential U.S. Court of Appeals for the 9th Circuit.

What have they done for women? How about giving them the right to vote. Try the 19th amendment, which 60% of democrats opposed.

They put the first female Supreme Court justice on the Court.

HIV Epidemic is an epidemic that impacts everyone. Not just gay people. So... No points there.

End criminalization, huh? Is that right after Infrastructure Week? or maybe that Health Care plan? Because what did the administration ACTUALLY do? As far as I can find, they planned on flying a bunch of activists to a dinner in Germany. But no indication that it every actually happened.

And appointing Grenells and Rowland. That's good. For the 90s. The bar is higher now.

Now let's compare what the Trump administration did: it argued that workplace protections didn't cover LGBTA people and it's legal to fire someone just because they're gay or trans. Banning trans people from openly serving in the US Military. Arguing in the Supreme Court that business owners can turn away LGBTQ customers. Ending Title 9 protections for Trans students. Protecting healthcare workers who refused to treat or deal with LGBTQ patients based on their religion. Originally planning on not counting LGBTQ people in the census (which undermins the Government's ability to craft legislation to support those groups).

So, appointing 2 people pales in comparision to his actual actions which were clearly anti-LGBTQ.

Now, as to the Republican things you listed: look how far back into the past you have to go to find anything. Were you alilve when OConnor was appointed?

And back when Rankin was elected, I would have been voting Repubican. Because back then they were the progressive liberal party.

Today? Not even close. They're the conservative party that actively works against various demographics and only seeks to get more money for their rich donors.
[deleted]
1 up, 4mo,
1 reply
😂 You smashed his flawed logic so badly that he ran away to other memes and stopped commenting here.
whistlelock
1 up, 4mo
OR I spent time verifying their claims?