2,712 views • 80 upvotes • Made by WayneUrso 3 years ago in politics
awkward smiling old man 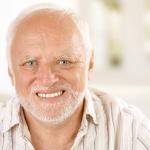 I just find the selfishness of both old and young to be so strong that it is comical.

The old bitches about the young but the young is exactly like the old. Paybacks a bitch. Too funny.
[deleted]
7 ups, 3y,
1 reply
And I'm here as a gen xer laughing at the whole thing.
SPatoine
3 ups, 3y
I'm glad someone else can see the humor in it. :)
VagabondSouffle
2 ups, 3y
Wait a minute, you mean the ones paying the spoiled brats' tuitions?
The_beez_kneez
1 up, 3y,
1 reply
can you please stop generalizing the whole thing by age
SPatoine
0 ups, 3y,
1 reply
It can't be denied the only voting block trump won was above age 50.
It can't be denied older generations frown upon younger generations.

No, not all people of any age group think alike. They can be generalized though as a general voting/thinking block.
The_beez_kneez
1 up, 3y
oh ok
OlympianProduct M
4 ups, 3y
You should submit that :)
[deleted]
3 ups, 3y,
1 reply
SPatoine
0 ups, 3y
That's pretty much what our Prez thinks of the situation. He could end it right now by closing down the beaches, closing down everything and making selfish people stay home so we can hurry up and get through this thing.
norsegreen
4 ups, 3y
When Rocky Mountain Oysters and Rocky Mountain Spotted Fever doesn't hurt the feelings of folks from that part of the world, the politically correct need to just suck it up.
[deleted]
4 ups, 3y
Don’t forget about the chickens
ArcMis
4 ups, 3y
7.ups
3 ups, 3y,
1 reply
Of course they came out when people weren’t looking for something to be offended by.
BlueNinja
2 ups, 3y
And the Spanish flu started in the US...
Show More Comments
Flip Settings

Caption this Meme
Created with the Imgflip Meme Generator
IMAGE DESCRIPTION:
DOES ANYONE ELSE THINK THAT THE TERM ‘CHINESE VIRUS’ IS ABOUT AS OFFENSIVE AS FRENCH TOAST, ENGLISH MUFFINS OR GERMAN MEASLES?
hotkeys: D = random, W = upvote, S = downvote, A = back
Feedback