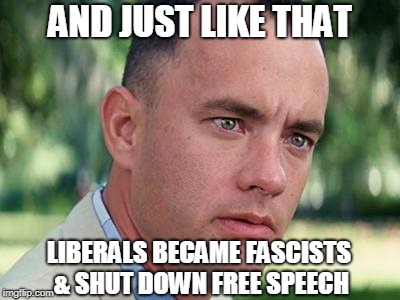 i.imgflip.com/25vp8q.jpg (click to show)
reply
oguinness
0 ups, 1y,
1 reply
OK Forrest, liberals became socialists and told your rich masters to go f**k themselves.
reply
JeffBurkellyson
1 up, 1y
I don't agree with government, this is why I'm Independent.
reply
synthetic-Mantis
1 up, 1y,
1 reply
i know. i put some comments about buying free gas at auschwitz and the libtard normies downvoted me. SO OPPRESSIVE AMIRIGHT?!?! >>>>>:::::((((((
reply
Natalie_vance
4 ups, 1y
Amirite*
low rated comment (click to show)
reply
BeatriceNeniute
3 ups, 1y,
4 replies
reply
JakkFrost
10 ups, 1y,
3 replies
*giggle* You're funny. I bet you also think liberals are good.
reply
VinceVance
5 ups, 1y,
2 replies
God bless you for your courage to answer back!
reply
BeatriceNeniute
2 ups, 1y
Thanks! I'm try to help those American, including Native Americans, who are against Trump's America and his tyranny. (I'd call Trump's control as tyranny, just to simplify for rebels against Trump.)
reply
SonicCal2
2 ups, 1y,
1 reply
Well I'll defend Beatrice. She's right you know.
reply
BeatriceNeniute
2 ups, 1y,
1 reply
Thanks. I was hoping for some Americans, including non-Americans and Native Americans, to support me and to those who are against Trump. Even if I'm not from USA, but I support the anti-Trump anti-fascism rebels.
reply
ArcMis
0 ups, 1y
reply
Octavia_Melody
3 ups, 1y,
1 reply
Some liberals are good and some aren't. Just like some conservatives are good and some aren't.
reply
JakkFrost
2 ups, 1y,
1 reply
On that we can agree. I should have said "I bet you also think ALL liberals are good".
reply
Octavia_Melody
3 ups, 1y
That would have been more accurate. Upvote.
reply
BeatriceNeniute
0 ups, 1y,
1 reply
What if I'm serious?! Seriously serious?! You Americans are SCUM!
reply
JakkFrost
0 ups, 1y,
1 reply
*Gasp* Did you just assume my nationality? You better check your privilege, you oppressive shitlord.
reply
BeatriceNeniute
1 up, 1y
Sorry about that, but not to all American people. It's just to those who don't care on what's actually happening. Nothing more.
reply
SpursFanFromAround.
6 ups, 1y,
1 reply
Explain why Donald Trump makes America fascist. I'll wait patiently for your lengthy response.
reply
BeatriceNeniute
1 up, 1y,
1 reply
He's racist, wanting make America into a racist country instead of a diverse multicultural country, he wants all Native Americans to die out, not letting innocent people and refugees into their country, like Mexicans and Muslims (because they're like us (despite of their difference), they ARE people and they don't want to cause harm to America at all), he lied about everything, and he lets chemtrails to destroy crops, which that could cause global warming, and he never cares about our dying home-planet. Plus, he also destroyed Obama's true "American Dream".
reply
SpursFanFromAround.
0 ups, 1y
Wow, am I being punked?
reply
musicman88240
5 ups, 1y,
2 replies
Um...can you give some real reasons why everyone should hate Trump? I'll wait.
reply
SonicCal2
1 up, 1y,
2 replies
Reasons? Bah, you know the reasons!
1. He’s a jerkass to women, calling them pigs and slobs. He also says that women don’t have power, just grabbing them by the pussy. Sure, Mr. Clinton did have an affair but that was years ago, and not president, so I don’t really think that can be used in an argument. (Plus that’s the only thing that can be used in your arguments, conservatives. No other prime examples have been shown in your comments.)
2. He’s a pro-white male supremacist, even the KKK leader approved of his actions!
3. He doesn’t believe in global warming because obviously he’s a conversative. We’ve already caused much damage to the environment that sadly we cannot recover.
4. He’s anti-immigration and he is racist to Arabs, Muslims and Islamics. Anything Middle Eastern? Nah, he denies em. He also split tons of families up and wants to build a friggin wall to block off Mexico’s “drugs, crime and **pe.”
5. He’s anti LGBTQ+ and banned transgenders from going into the military. He believes there is only male and female genders and you cannot change your born gender and you just have to “deal with it.” Isn’t that just a kick in the balls?
6. He only cares about money. Apparently you conservs like money a whole lot and nothing more. DOLLARS DON’T ALWAYS MAKE THE WORLD GO ROUND, YA KNOW!
reply
musicman88240
1 up, 1y
Since when is Muslim a race? And yeah, there are only two genders. You will not convince me otherwise.
reply
JakkFrost
0 ups, 1y,
1 reply
1. "He's a jerkass to women" - So what? It is not, nor should it be, a crime to be rude to women. They're equal, they're empowered, they can take it.

2. "He’s a pro-white male supremacist, even the KKK leader approved of his actions!" - KKK members are know to like heavy metal bands like Def Leppard and AC/DC, does that make those bands racist and white supremacist? And "pro white"? What exactly is wrong with that? "It's OK to be white" is not the same as "white supremacy".

3. "He doesn’t believe in global warming because obviously he’s a conversative." - Huh? He's a bit of a retard on the subject, but how is being a conservative obvious because of that? Or is that just your bigotry showing through?

4. "He’s anti-immigration" Straight up lies. He's not anti-immigration, he's anti-illegal aliens. Those who cross the border illegally are not immigrants, they're aliens. The wall is for stopping illegal aliens from crossing the border, but even if it were specifically for the purpose of blocking Mexico's "drugs, crime, and **pe", how is that a bad thing? And plenty of Middle Easterners were allowed in, just not from specific countries.

Also, /of course/ there are only two genders. Anything else is just transtrenderism promoted by those who confuse gender with personality. In fact, saying there are more than two genders is highly transphobic. Transgenders have enough trouble getting people to understand that they're the wrong gender, that they were born in the wrong body. Claiming gender is fluid shits all over their cause.

6. "He only cares about money. Apparently you conservs like money a whole lot and nothing more." - If money is such a problem to you and you don't want it, then you libs can just shut up about spreading other people's wealth around.
reply
[deleted]
0 ups, 1y,
1 reply
reply
JakkFrost
0 ups, 1y
You're pissed off? Is that supposed to mean something? Am I supposed to care?

Don't blame me if you can't deny facts.
reply
BeatriceNeniute
0 ups, 1y,
1 reply
He's racist, wanting make America into a racist country instead of a diverse multicultural country, he wants all Native Americans to die out, not letting innocent people and refugees into their country, like Mexicans and Muslims (because they're like us (despite of their difference), they ARE people and they don't want to cause harm to America at all), he lied about everything, and he lets chemtrails to destroy crops, which that could cause global warming, and he never cares about our dying home-planet. Plus, he also destroyed Obama's true "American Dream". Also also, he secretly sexually assaulted so many women. Also, he never confess his wrongdoings ever or tell the real truth about himself, he just kept lying to everyone.
reply
musicman88240
1 up, 1y,
1 reply
Where to begin...

How do you know he is racist? I haven't heard him say a single thing that could be interpreted as racist. Please give links to said statements.

As for immigration, he has said that immigrants are welcome on many occasions. The problem lies with those who enter illegally. Try entering Mexico illegally and see where you end up. So why shouldn't we have the same border security?

It isn't about Muslims, it's about people from countries that are known sponsors of terrorists. In case you haven't heard, Muslim terrorists do want to kill us. Innocent people are welcome, terrorists are not. Obama didn't seem to care about vetting so it's up to this president to come up with policies that ensure we won't have another 9/11.

If he sexually assaulted someone he should be punished for it. So why is Bill Clinton still on the loose, and why is it okay for one person to do it and not another? Oh that's right, Bill is a democrat.

So what exactly has he lied about? Is that anything like Obama lying to us about Obamafraud or Hillary lying about dodging sniper fire? Or is all of that okay because they are democrats?

I eagerly await your thoughtful response.
reply
BeatriceNeniute
0 ups, 1y,
2 replies
YOU ARE NOT RIGHT! Muslims are NOT terrorist! Not all Muslims are terrorist, they're friendly, like us. Same to Mexicans who they just want to say hi and bring light and hope within tradition.
If you think I'm wrong, then I will kill Trump in his sleep and Oprah Winfrey will become a better president and America will be democratic once again. So, f*** the Rebublicans!
reply
musicman88240
0 ups, 1y
I didn't say that all Muslims are terrorists, but some are. The problem is distinguishing between those who want to kill us and those who don't. Same with Mexicans, most just want a better life.

Oh yeah, that knock on your door is the Secret Service.
reply
JakkFrost
0 ups, 1y
"Muslims are NOT terrorist! Not all Muslims are terrorist"

You're being self-contradictory there. Which is it?

And nobody said ALL muslims are terrorists, but the majority of terrorists are muslims.
reply
OhWell
3 ups, 1y,
2 replies
Do you have any facts to back up your raving or are you just trying to be edgy?
reply
FightingUntruth
2 ups, 1y
As edgy as a bowel of pudding
reply
BeatriceNeniute
1 up, 1y,
1 reply
I'm not trying to be edgy. I'm actually telling the truth, this is more than just facts. I'm trying to do what's actually right for America and prevent what's actually wrong. This is why I support anti-fascist anti-Trump rebels.
reply
musicman88240
0 ups, 1y,
1 reply
But when left-wing wackos like antifa try to squash free speech and different opinions with violence aren't they becoming that which they hate?
reply
SonicCal2
1 up, 1y,
1 reply
We’re not all wackos. You should know better than to state that all libs are dumb. And I know better than to call names too so don’t assume. Trump’s a jerk and you know it! You just won’t admit to it. At least not yet... In short, get outta your small world and jump into the big one, you’re missing out a lot.
reply
OhWell
0 ups, 1y,
1 reply
Are you still in middle school?
reply
SonicCal2
0 ups, 1y
No. I bet you are. I’m just being an open minded person. Now let me get on with my life.
Show More Comments
Flip Settings
Created with the Imgflip Meme Generator
IMAGE DESCRIPTION:
AND JUST LIKE THAT; LIBERALS BECAME FASCISTS & SHUT DOWN FREE SPEECH
hotkeys: D = random, W = upvote, S = downvote, A = back
Feedback
<![endif]-->