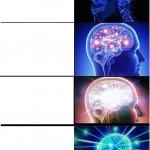 This is getting out of hand more and more each day, i swear.
Memergirl11
3 ups, 3y
This is actually true to be honest
EdandBrittanyVineyard
5 ups, 3y,
2 replies
Its even worse when it's "your gay"
HenryKrinkle
8 ups, 3y [deleted]
1 up, 3y
*You’re
Dimderi
0 ups, 3y
I'm offended just for the record I dont believe gay is and insult and I never have it's not an age group it's just certain people
thickboy12120
11 ups, 3y,
4 replies
yes like whats wrong with being gay
AN0NYM0US
7 ups, 3y,
2 replies
Nothing. So using the term "gay" outside of noting one's sexuality is typically not a positive use of the word.

Have you EVER heard things like this when describing how GREAT something is? Of course not. Just stop. I really would like to think you're all better than this. But I afraid you may not be.
[deleted]
2 ups, 3y,
3 replies
your gay
AN0NYM0US
4 ups, 3y
my gay what?
EdandBrittanyVineyard
2 ups, 3y
yes, he is my gay
thickboy12120
0 ups, 3y
i am not gay
Memesbros
0 ups, 3y,
1 reply
Imagine if you just bought your house and your friend said:"your house looks so gay"😂
AN0NYM0US
3 ups, 3y
[deleted]
0 ups, 3y
your mom
EdandBrittanyVineyard
2 ups, 3y,
2 replies
Right? You'd think they're still living in the 1980
NeilBrown
5 ups, 3y,
1 reply
You mean back when rainbows were for *everyone,* not just the f*gs?
EdandBrittanyVineyard
5 ups, 3y,
2 replies
Oops, I am sorry you are butthurt about the rainbow being associated with gays. For most people just because it is associated with it's not mean that they can't enjoy it

Maybe look up 'Incel' while you're at it...
[deleted]
1 up, 3y,
2 replies
EdandBrittanyVineyard
2 ups, 3y
So if you aren't cisgender you need a psychiatrist? o.O can you explain why?
JRBobDobbs
1 up, 3y
"Identify as incel"?!

Stop! Stop!
I'm gonna get a stitch
ChocoMeme
0 ups, 3y,
1 reply
man, are you really just going to reply all the comments to ensure the lack of heteros?
EdandBrittanyVineyard
0 ups, 3y
you took the time to write a reply. I take the time to do the same out of respect, even as I disagree with your opinion. Civilization...
thickboy12120
0 ups, 3y
true
BeegtymeRawkstah
2 ups, 3y,
2 replies
According to the CDC, what's wrong is a vastly increased mortality rate as a result of many, many diseases.
EdandBrittanyVineyard
3 ups, 3y,
1 reply
If you could just link me to a CDC research that support that claim
low rated comment (click to show)
BeegtymeRawkstah
0 ups, 3y,
1 reply
EdandBrittanyVineyard
1 up, 3y,
2 replies
So you claim that something is one way "according to the CDC" but when asked to back it up by showing where the CDC indeed said that, you send the person doubting your claim to search for information to prove your claim?

Look, I could claim that "according to CDC" seven in every ten gay haters are actually bicurious and terrified of it but without an actual official CDC estimate that says that, it's just pure BS... just like your claim
BeegtymeRawkstah
0 ups, 3y
The CDC exists. It takes mere seconds for you to go there and confirm or refute my statement. But you won't, because it's... my job to do research for you. You can write tl;dr forever, but not ever use Google and do your own reading. Peak NPC. Stay ignorant, never take the time to read and learn for yourself. See if I care.
BeegtymeRawkstah
0 ups, 3y
Oh, and just for fun:

Caption this Meme
Created with the Imgflip Meme Generator
IMAGE DESCRIPTION:
YOUR GAY; YOU'RE GAY; YOU ARE GAY; YOU ARE A MORON IF YOU THINK "GAY" IS AN INSULT
hotkeys: D = random, W = upvote, S = downvote, A = back
Feedback