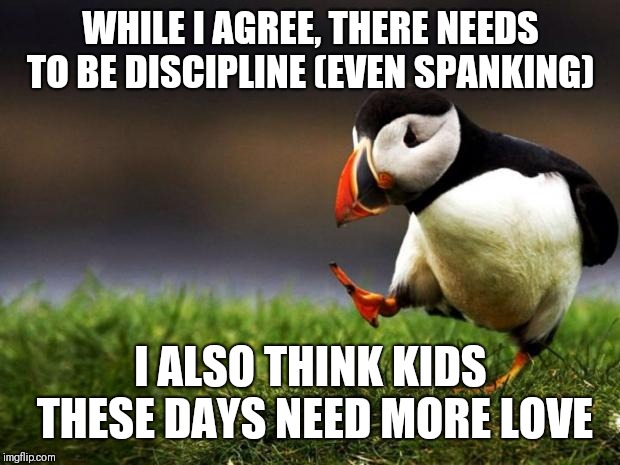 Dropped off at daycare by 6 weeks, parents split, there are a lot of kids not getting much love or attention or discipline. Love + discipline = great person. Love - discipline = crazy brat. No love no discipline = hedon. Discipline without love = monster.
CousinJohn
2 ups, 3y
Agree. Things aren't like they used to be, though. We're well into our second and third generation of latchkey kids.

Long into the industrial age, there were many men self employed. While their wives helped with the business, to some extent, but kept her eye close on the workings of the household. Often Dad would take the boys with him to learn the trade. Also, multiple generations lived in the home. I grew up, Grandma had a job til she retired, then Mom went to work, but Grandma stayed with the kids still at home. She was a stern task master, and the only way out of doing chores was to get a job. Only the baby of the family waited until after he graduated to get a job. We never became quite the nuclear family of the later part of the 20th century. The original definition of the nuclear family was the parents and the kids. But, like a nuclear reactor, it was very unstable. Ask Swiggy about it if Imgflip ever asks him to come back.
giveuahint
9 ups, 3y,
2 replies Agreed. I used spankings for my kid, and he is now 20 and a respectful adult. We have a close relationship, and he even thanks me for it. I did NOT beat him... it was discipline, and also taking time to explain why that behavior is unacceptable and what behavior is acceptable.

I have received many text messages and Facebook messages from old high school friends who I rarely speak to who saw him working or saw him out with his girlfriend, and they would tell me how very polite he was and how he was so well-mannered. All kids react differently to different types of discipline. You just have to find what works for your kid.
Jying
6 ups, 3y,
1 reply Thanks, you got my point completely :) If you love 10 times harder than you would ever smack them you are doing it right in my opinion. Plus there has to be a genuine reason for it, and it should be the last resort.

My youngest just turned 7 yesterday. I homeschool him, he is like me and very adhd, if he was in school they would demand I put him on medication. But since he is just like me and I understand him I know how to handle teaching him.

Was having problems with him overreacting and throwing a fit every time heard the word no. So I made a chart, sat him down with his 17 yr old sister who also disciplines him as well as me and laid out a system of rules we all have to follow. It helps to have the entire household follow the same game plan I have found.

Basically if he throws one fit he has to give me a hug and we walk over to to the chart and check box 1. Second fit is a timeout staring at the wall for 3 minutes and we check box 2. 3rd fit he loses video game privileges for the day. 4th is all electronics. And number 5 is the smack. He has never made it past box 3 since we started this. The first 3 days in fact he got no check marks at all. He knows that every day he has the same rules to follow and it has been amazing honestly. Not saying this would work for all kids, only sharing what has worked for me. I think I have the chart on this computer I will see if I can find and share it as well....
Memedave
4 ups, 3y,
1 reply
Thank you for sharing that, Jying! I would like to use that 5-step chart with my son, if you don’t mind. He is 7 also, is autistic and has ADHD. The word no is a big trigger word with him too. But with him being very visual and good with routines, I think your chart would help. Thanks for the insight! : )
Jying
2 ups, 3y,
1 reply
Go for it bro, it worked wonders, hope it helps!
Memedave
3 ups, 3y
Thanks! I’ll let you know.... ; )
jaden169
6 ups, 3y,
3 replies
Did you ever stop to think that the spanking part didn't help, but the other parts did? It doesn't take corporal punishment to raise a well adjusted, polite, responsible adult.
giveuahint
6 ups, 3y,
2 replies
For my kid, I was doing the other parts alone first and they weren’t working. When I added the spanking, then his behavior changed. As I mentioned, all kids are different so I do agree that spanking is not necessarily needed for all kids. I was an example of that.

I was probably spanked a total of 10 times my whole childhood. All I normally needed was a stern look from my dad to change my behavior. My son outright admits that he didn’t listen or respond until the spanking was threatened or finally given. As he got older, I moved to taking away his PlayStation or LONG lecturing because those seemed to get his attention more. He actually said “Mom, can you just spank me and get it over with?” Lol

It really is about finding what works for your kid and then being consistent. It’s just hard sometimes to pinpoint what that motivation is for your kid.
Jying
4 ups, 3y
Well said :)
[deleted]
4 ups, 3y
Yeah. Kids vary.
Jying
2 ups, 3y
I guess you're talking to me, I haven't had to use the "spanking" part since I started using this. I think you mistake a smack on the butt for beating my kid, I have never hurt more than his feelings by smacking his ass. Are you a parent? You sound more like a kid to me...
JakkFrost
1 up, 3y
Conversely, did YOU ever stop to think that the spanking part DOES help. I may not take corporal punishment with /all/ kids, but as SJWs are so fond of pointing out, everyone is unique, and not all kids are the same. Some kids DO need a spanking once in a while.

And it's even more true these days, because kids are getting smarter. They have too much power, and they know it. If you take away their X-Box or their phone, they know all they have to do is call a helpline and say "mommy and/or daddy touched me in a bad place".


Claybourne
3 ups, 3y,
1 reply
;D
DrSarcasm
1 up, 3y
JakkFrost
0 ups, 3y
It's the parents' job to teach their kids about consequences that are actively unpleasant, as opposed to minor inconveniences. Kids who aren't taught consequences are the kinds of kids that laughingly flip the bird at the judge during their trial.
DashHopes
7 ups, 3y,
1 reply
[deleted]
8 ups, 3y,
2 replies
DashHopes
6 ups, 3y,
2 replies
[deleted]
4 ups, 3y,
2 replies
I don't think my Dad ever hit us, just the thought of it kept us in line!
Actually I was a little angel :-)
DashHopes
4 ups, 3y,
1 reply
Agreed. No days the kids feel they can do anything because there’s nothing to stop them. Our now 18-year-old Always used child protection against us if we were trying to Discipline him in any form. Let’s say he’s not living the best life and no matter what we want to do for him we are wrong.
[deleted]
3 ups, 3y,
1 reply
Man, that's tough going for you. They can be a bit bewildering at times, but as long as you are consistent and keep your integrity intact, often you can't do much else.
DashHopes
4 ups, 3y,
1 reply
Well he moved out of the house because there was no smoking no drinking no drugs rules for the house and he didn’t respect those. Go to work come back home and it was always a party. Since he moved out he’s had three apartments and kicked out of each. I think it’s gonna be one of those learn on your own life experience things. We are there for him but only so much we can do.
[deleted]
4 ups, 3y,
1 reply
RESPECT!!!
You stuck to your guns, life ends up teaching us (all) a lesson in the end!
[deleted]
4 ups, 3y,
1 reply
I was actually a victim of child abuse. When I was younger my dad used to hit me for the most trivial things, like spilling my glass of water, and younger, 4-year-old me thought this was normal and discipline. Then when I was 11, my dad hit my mom and nearly killed my cat, and we kicked him out. This wasn't the first time it had happened, they used to fight constantly. 3 years later, he hasn't come back, and I haven't seen him in almost 2 years. I hope the bastard dies a horrible, painful death.
[deleted]
2 ups, 3y,
1 reply
That's awful for you, growing up like that, I'm sorry to hear it.
[deleted]
0 ups, 3y
Thank you for your concern. He is now permanently out of my life. I hope wherever you are now, yours has or will improve in the near future.

Anyone who is reading this, have a great day and best of luck to you as well. Don't focus on other people's problems, and don't let other people weigh you down. You don't have time for that.

As a wise man once said to me: "Everybody has the power to change the world. It's OK if you use that power to save one person, and it's OK if that person is you.
tryhardskin
3 ups, 3y,
1 reply
i was a living nightmare when i was a kid
[deleted]
1 up, 3y,
1 reply
And now???
tryhardskin
2 ups, 3y,
1 reply
still is lol
LadyDeerHeart
2 ups, 3y
I dislike the "spank the children" conversations because so many people don't seem to realize what some kids live through. I was diagnosed with PTSD when I was 6. Recently I was diagnosed with complex ptsd because the abuse never ended. "Spanking" was abuse in my home and it was an everyday experience. I doubt those that advocate for spanking ever had blood running down their legs from a switching or concussions from being punished for not sweeping in the right direction.

When you talk about spanking children you have to acknowledge the parents that beat their children and call it spanking. It happens more often than anyone wants to admit and yes a simple conversation about how kids need to be spanked into submission can cause an innocent child to be beaten.

I'm happy most people don't realize how much pain a child can go through because the adults around them think hitting a child is the same as discipline.
Keltex78
3 ups, 3y,
1 reply
Once.
DashHopes
2 ups, 3y
DrSarcasm
2 ups, 3y,
1 reply
[deleted]
1 up, 3y,
1 reply
My Mum used to threaten to send us into next week!!!
DrSarcasm
3 ups, 3y
[deleted]
7 ups, 3y
It’s not that hitting children for misbehaving is wrong, it’s that it’s iften done the wrong way. I got the paddle in school in the south way back in the day. The principal had no emotion and hit just once. Turned me around, still with no anger and asked if I wanted him to do it again. I never acted up again.

Caption this Meme
Created with the Imgflip Meme Generator
IMAGE DESCRIPTION:
HOW MANY GENERATIONS OF DISRESPECTFUL SPOILED BRATS WILL IT TAKE; FOR PEOPLE TO START SMACKING THEIR KIDS AGAIN
hotkeys: D = random, W = upvote, S = downvote, A = back
Feedback