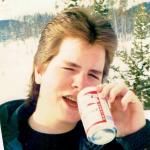 Childhood in the 80's back when no one even bothered to report child abuse and sexual assault victims got accused of asking for it because of what they were wearing.
[deleted]
6 ups, 3y,
3 replies
reallyitsjohn
4 ups, 3y,
4 replies
children died doing exactly what risky stuff? You mean like football, agreeing with a conservative idea, asking a girl out on a date more than once???
BlueNinja1
3 ups, 3y,
1 reply
reallyitsjohn
2 ups, 3y,
1 reply
it was actually a lot of fun
Billy_blox
1 up, 3y
yeah i remember those things but now that pussyism has taken over the charter schools are getting the good things and the public gets cracked ashphalt
[deleted]
3 ups, 3y,
2 replies
Billy_blox
2 ups, 3y
yeah but parents when they see their kid without a helmet now they act like they stolen a car
reallyitsjohn
1 up, 3y
Had to dig at you just a little :)
BlueNinja1
2 ups, 3y,
1 reply
reallyitsjohn
2 ups, 3y
just trying to think of all the things deemed to risky to do today, that I did back then :)
catfish94
2 ups, 3y
JakkFrost
3 ups, 3y,
2 replies
Well we've gone from one extreme to the other. Now children are OVER-protected.
BlueNinja1
3 ups, 3y
Kids today have different challenges but many are still having to fight it out, in many ways.
Beckett347
2 ups, 3y
Modda
3 ups, 3y,
1 reply
[deleted]
2 ups, 3y,
3 replies
Modda
2 ups, 3y
haha
J.Balser
0 ups, 2y
coming from you ? LMAO ! you wouldn't handle one of my age group with 10 of your friends from today
J.Balser
0 ups, 2y,
1 reply
LMAO ! you got that ALL wrong kiddo, I never fought with backup, still don't. Just saying 3 of the kids from my day would be better than 20 of today's . That clear it up for ya ?
[deleted]
0 ups, 2y,
1 reply
J.Balser
0 ups, 2y
yes, sorry, should have clarified :)
low rated comment (click to show)
Natalie_vance
1 up, 3y
low rated comment (click to show)
Natalie_vance
2 ups, 3y,
2 replies
Modda
3 ups, 3y,
1 reply
I deleted the other one and replaced it with this.
[deleted]
2 ups, 3y,
1 reply
Modda
3 ups, 3y,
2 replies
Would you prefer that I respost the one I did take down that was a tad more.... embarrasing?

I'm sorry your online relationship backfired.
:)
Back to trolling people on the internet at 50 years old I guess, huh?
Modda
2 ups, 3y,
1 reply
When is it going to sink into your teeny brain that

Seriously, how lonely can you be that you gotta chase blips on the screen like me rather than real fellas out in the real world?

Post some of your patented stolen memes away....
Modda
2 ups, 3y
Those are the two memes I deleted before anyone else saw them so you wouldn't catch a major cardiac, dingbat.

Or did you forget what happened two weeks ago when I didn't soon enough?
Which reminds me, you declared war, and was ridding my ass from here. How's that going so far?
Modda
1 up, 3y
>be Modda
>post stale meme
>be Natalie
>post dank meme
>force the other to delete and try again
>YOU WIN!
>WIN!
>WIN!
>WIN!
>WIN!

You saw the other meme I posted in the wee hours when the rest was asleep.
Had my fun, deleted it before even the Europeans got back on.
You wanted to go dank.
Done.
Modda
1 up, 3y,
1 reply
You should submit a meme about how those kids still without their parents after Trump removed them will be Ok, after all, you turned out alright. Ain't that right, my fave self hating Latina?
low rated comment (click to show)
Natalie_vance
1 up, 3y
jkamm
6 ups, 3y,
1 reply
Nowadays, the kids don't even play out on the streets, they're too scared.
BlueNinja1
5 ups, 3y,
1 reply
low rated comment (click to show)
Natalie_vance
1 up, 3y,
1 reply
MonsterTrucker
3 ups, 3y
So...jokes about vehicular murder of people you don't like. Classy.
Billy_blox
0 ups, 3y
back then if you beat a somone up for a friend meant you werent a pussie. now you tap one kid and you get lectured suspended and even blamed for it when then the only thing that would earn all that would be bringing a real gun to school and firing it
Show More Comments
Flip Settings

Caption this Meme
Created with the Imgflip Meme Generator
IMAGE DESCRIPTION:
BACK IN MY DAY, 3 OF US WOULD BEAT THE SHIT OUT OF 20 OF TODAY'S KIDS
hotkeys: D = random, W = upvote, S = downvote, A = back
Feedback