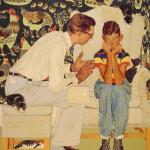 We'd have a better country if families stayed together and conscientiously raised their children
DrSarcasm
10 ups, 4y,
1 reply
That requires commitment to another person even when it is inconvenient to one’s self - and the rejection in the belief that I deserve to be happy, and can justify any bad action on another if it furthers my happiness.
MirthfulGem
9 ups, 4y
jakey199
10 ups, 4y,
1 reply
captainkudzu
10 ups, 4y
Memedave
10 ups, 4y,
1 reply
DrSarcasm
9 ups, 4y,
1 reply
Memedave
8 ups, 4y
or_else
8 ups, 4y
[deleted]
9 ups, 4y,
2 replies
Just a quick fix.
JJJR
3 ups, 4y,
1 reply
Another straw man.
[deleted]
7 ups, 4y,
1 reply
Wrong.
JJJR
5 ups, 4y,
5 replies
And? There is not a problem with this statement in the least. We can discriminate when it comes to behaviors. We all discriminate in one way or another when it comes to behaviors. This is not to say thay we don't treat others with dignity and respect. One cannot change their ethnicity but people can and do change their behavior all the time - so these are different things which should be treated differenty while we should treat like things the same. I hope this helps.
SilicaSandwhich
3 ups, 4y,
2 replies
You can't change your sexualiity. You physically cannot. If I forced you to be gay, I would bet you couldn't do it
Young_Grasshopper
2 ups, 4y,
3 replies
Actually, many who experience unwanted homosexual attractions undergo therapy (mostly talking, not those terrible shock and aversion types) in order to work through their feelings and learn to not be defined by them.
[deleted]
2 ups, 4y,
1 reply
Young_Grasshopper
0 ups, 4y
I don't know exactly how it works, but there are many scholarly papers on the subject that are readily available
DerpRox
1 up, 4y,
1 reply
Imagine that only homosexuals could marry and strait people were shunned. Ignoring the fact that there people would not be making babies in the conventional way; but then again when did rational come into this debate.
JJJR
0 ups, 4y,
1 reply
This is an appeal to emotion but are homosexuals shunned today? I will concede that the historical record of treatment of homosexuals is horrible but today? It's almost a badge of honor. Heck, I catch more flack for being a Consrvative. But, what would the world look like if everyone lived in natural marriage versus if everyone lived in a same sex "marriage"?
DerpRox
1 up, 4y,
1 reply
It's an appeal to your decency to ask you to consider the situation of the relevant people whom you're making an assessment of rights about. You’re dodging.

Are homosexuals shunned today? Not to the extent that they once were. While they're still being killed in other parts of the world things have come a long way in the US in recent years. This is a good thing, but it could be better.

You're poisoning the well here by positing the very thing being contested by saying that the natural marriage is between a man and woman.
It would not be unlike the world we came from, where homosexuals aren’t allowed to be married to the gender which they have a proclivity to marry.

What would the world look like if everyone could marry who they want?
JJJR
0 ups, 4y,
1 reply
What does "SHUNNED" have to do with anything? Are you advocating people being forced to be around others whether they want to or not?? I grew up in Detroit and shunned people all the time because they were dangerous.

So,you seem to saying that I can marry anyone I want then. So, what is your principled argument against a man marrying his 15 year old daughter?
DerpRox
0 ups, 4y
People should not be allowed to get married if they're too young to consent. Also, I'm an outlier here but I don't see incest as intrinsically bad; although there is a power dynamic between parent and child that I think constitutes grounds for not allowing it.
SilicaSandwhich
1 up, 4y,
1 reply
But do we really want to force people to either do that or be shunned?
Young_Grasshopper
0 ups, 4y,
2 replies
I never said it should be forced. In fact, I think forcing it would be outright cruel. However, some people experience homosexual attraction as an unwanted thing, and have every right to seek help if they want it.
DerpRox
0 ups, 4y
If they don't want to be homosexual then while they would be suppressing their innate feelings, they could still legally marry whoever they want. Nobody is forcing anyone to marry anyone else. The point of disagreement is about the hindrance on marriage.
SilicaSandwhich
0 ups, 4y,
1 reply
I agree. Anybody should be allowed to do anything they want as long as it doesn't harm anyone.
Young_Grasshopper
2 ups, 4y
Absolutely! Although I do want to make the distinction that certain things that are permissible are not always beneficial or right.
JJJR
1 up, 4y
I agree with you. I am not sure what you mean by "force" but in general the thought of it repulses me and I think that it is a natural thought of most heterosexuals. I will admit that I have no idea of what it is like to have same sex attractions but I do know what it's like to have attractions to things which will hurt me and my family if I acted on them.
DerpRox
2 ups, 4y,
1 reply
So strait people can marry but homosexuals shouldn't be allowed to? No discrimination there. =P
JJJR
0 ups, 4y,
1 reply
I am in agreement with the first part of your statement but not the 2nd. Homosexuals can get married to a person of the opposite sex. As for 2 men or 2 women getting "married" - it is impossible in reality. Legally - according to the Supreme Court decision - yes. Does everyone have to accept? No. But to answer your last question - it is allowed by law - so what's the issue? Is it that I don't acknowledge it??
DerpRox
1 up, 4y
We're talking about whether homosexuals should have the same rights as everyone else. You think they should not, and I think that unless you have some objective reasons that can hold up to scrutiny, you are discriminating against homosexuals for illogical reasons. The bedrock of your position, assuming that we're not invoking deities, is an emotional one. A particularly ugly emotion called disgust, backed by a retrospective rationalization and reinforced by the rhetoric of our peers.
synthetic-Mantis
1 up, 4y
Here's a non-democrat saying we should discriminate.
[deleted]
2 ups, 4y,
3 replies
Young_Grasshopper
1 up, 4y,
1 reply
JJJR didn't talk about orientation, but specifically used the term "behavior". I do agree with you 100% that it is a mistake often made, but this is not an instance of such a mistake
[deleted]
3 ups, 4y,
1 reply
Young_Grasshopper
1 up, 4y
I fail to see where orientation and attraction were presented as the subject. Not to mention that you seem to be faulting him for both talking about behavior and for not talking about behavior (unless I am misunderstanding you, which is very possible).

I do agree that a lot of conservatives make the mistake of flipping back and forth between orientation and behavior, and it creates a sort of confusion that muddies the waters of discussion. Clarity is certainly important.
Beamcat
0 ups, 4y
ehhh.
InarenCommander
0 ups, 4y
Just like if you identify as a banana. (One of the 50 whatever genders) That's just who you are! Use logic people.
[deleted]
3 ups, 4y,
1 reply
Oh f**k you, if being gay was a choice then we wouldn't even be having this discussion. And no, when you deny rights and privileges to a specific group of people that is not treating them with respect, that is the definition of bigotry.
JJJR
3 ups, 4y,
2 replies
Who said it was a choice? I surely didn't. So many straw men and so little time. No, you cannot chose desires but you can chose to act on them or not. And what rights are being denied to people????
DerpRox
0 ups, 4y
Your position is not exactly clear.
Just so that we understand your position better. Let me know if I got any of this wrong.
I’m asking if you agree with this.

You agree with Mike Pence that homosexuals should not be entitled to the protection of anti-discrimination laws.
This is not discrimination against gay people, but against the defining characteristic behavior of gay people.
We can “discriminate against behaviors” (By “we can”, presumably you are asserting: ethically?)
You agree that being gay is not a choice.

You agree with that so far? Which part(s) don’t you agree with?
[deleted]
0 ups, 4y,
1 reply
JJJR
0 ups, 4y
Please lookk at the entirety of the statement by VP Pence. He is saying that they do not deserve protection IN THE SAME WAY and FOR THE SAME REASONS(I am not yelling - only adding emphasis). Women and blacks(or any other ethnicities) were being discriminated against because of those unchangable charachteristics. So, the entirety of his statement is coherent. Homosexuals enjoy all of the same rights as every other American. The same could not have always been said for women and blacks. And BTW, I think that it's the way it should be. I believe that every person should be treated with human dignity.
SilicaSandwhich
1 up, 4y,
1 reply
That picture should honestly be a template. There's so many people you can use it for!
jack_henoff
0 ups, 4y
You can make it or any into a template here.
Nixie.Knox
5 ups, 4y,
1 reply
they are being raised to have zero tolerance or respect. The idea of having hurt feelings or someone in disagreement with them is practically punishable by death.
TyphoonOfTheUnknown
2 ups, 4y
nottaBot
5 ups, 4y
Awesome.

Thank you for this!
Show More Comments
Flip Settings