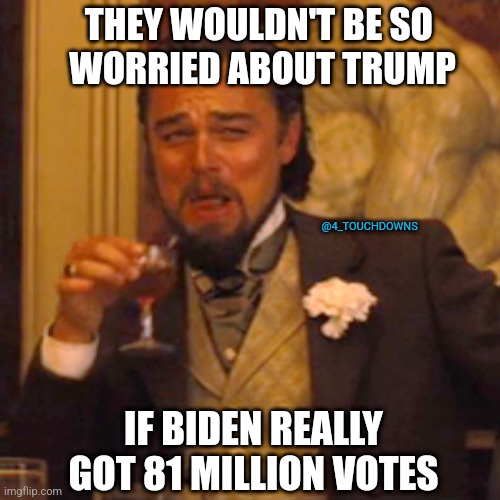 1,834 views • 97 upvotes • Made by shoepimp 2 months ago in politics
bidentrumpelection fraud 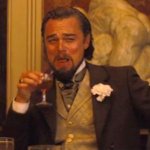 [deleted]
9 ups, 2mo
Trump won. Everyone with a brain knows this.
DanSmith8
7 ups, 2mo
But Biden had 10s of people at his rallies. How does that not translate into millions of votes?!?! hahahahahaha...

Trashbuilder
5 ups, 2mo,
2 replies
Why would anyone want to vote against Trump so strongly?

The fraud is clear.
zenpistolero
2 ups, 2mo
Not sure where you live. I'm in California, so I hear all the people who believe Trump is Hitler. It's amazing. One person who had lived here with her American husband for a long time, became a citizen for the single reason to vote against Trump. The reasons are many, and some I even agree with. I didn’t vote for him in 16 because of his fraudulent "university." Talk to a never-Trumper and let them fully explain all their reasons why Trump is the last person in the world that should be president. Then ask them if they are unimpressed that Trump achieved more Middle East peace treaties than Carter or Clinton and let them explain that Middle East peace is a big fat nothing burger. Their emotional conviction that Trump is Hitler is the key to how Trump got more votes than Obama, but still lost to an incoherent old white politicritter.
AN0NYM0US
1 up, 2mo,
1 reply
Because he’s an awful human being and worse president. Or vice versa. It’s that simple. Even MANY actual republicans and conservatives know this and voted for Biden.
Trashbuilder
3 ups, 2mo,
1 reply
I don't see what you say. I see that he is someone inspiring. Someone who has the guts to really fix problems and not pretend like he does, like most politicians. As well as a pacifist, someone who could end all the wars that exist. Instead of pretending that they do it to actually make money producing them. And that he knows how to connect with people who are not being listened to.
low rated comment (click to show)
AN0NYM0US
1 up, 2mo,
1 reply
Trashbuilder
2 ups, 2mo,
1 reply
That's what the press says but it's not true. You have to check the data.
AN0NYM0US
1 up, 2mo,
1 reply
Yes it’s true. The data is there.
Trashbuilder
1 up, 2mo,
1 reply
Specify which lies you are referring to. Because I don't see that.

I don't expect you to read anything I linked to. Cult members don't believe they are in a cult, no amount of proof changes that.
Fauscovai
3 ups, 2mo,
6 replies
Yeah I know you hate Trump. But I sure miss gas being under 2$, I miss the 83 billion in military equipment that was given to the taliban, I miss not being under an inflation, I missed not being under a recession, I miss the 200k I lost in investments, I miss going to the market and being fully stocked. Now, really, what has Biden done to better your life? You should be hating Biden, not Trump, things were MUCH better under Trump. Why is that so hard to see?
AN0NYM0US
0 ups, 2mo,
1 reply
"But Trump did not made it worse as Biden did, and there are millions of people in United States that got screwed big time by Biden. "

Again- HOW? Explain HOW Trump made things better: what policies and decisions and actions made things better, and the same for Biden: What did Biden actually DO to make things worse? If it's true I don't argue with facts. Just say what they did in either/both cases.
Fauscovai
1 up, 2mo
Easily. He was building a border wall to protect us from illegals. My dollar purchasing power was stronger. We were not under inflation, and under recession. Supermarket was always full, gas was cheaper, did not have to look for a new job because my old employer went under, now I have a less likeable job. Again I did not said that Trump made it better, I said Trump did not made it worse. Reading comprehension is a class I encourage you to take. Cheers!
AN0NYM0US
1 up, 2mo,
1 reply
What did Trump do to make things better and what has Biden done to make things worse?

Trump raised the debt and deficit and weakened our relationships with allies and dropped the ball BIG time with Covid. My investments are down but will bounce back. Gas prices will lower (already are,) inflation is falling, unemployment looks good AND we aren't the laughingstock of the world.

https://www.foxnews.com/opinion/good-things-biden-leslie-marshall
Fauscovai
2 ups, 2mo
Wrong. My question was "what has Biden done to better your life?" Do not put words in my mouth. From your poorly answer question I will assume he has done nothing. Thank you, your silence gave it away. If anything it shows your severe TDS.
AN0NYM0US
0 ups, 2mo,
1 reply
What did Trump do to make your life better? I'm not a cult member here to defend Joe Biden. I'm also not stupid enough to blame him for all my life's woes. Neither Donald Trump or Joe Biden can control gas or oil prices. The War in Ukraine is a WORLD war in that the entire world is feeling the effects of it. His entire Presidency so far has been damage control on all fronts. So, I can't say what Joe Biden has done to make my life better other than what I posted. My taxes went up under trump so while my 401K looked better I can't say my life was "better" under Trump. I am doing fine now as I was then. taxes up/taxes down. Gas up/gas down. Inflation up/inflation down. I am fine. My family is fine. My life *is* better in that I am more comfortable having Biden in the whitehouse representing our country on a world stage. I am also happier knowing he's less awful than Trump in every way as a human. Biden is my old racist uncle and Trump is a narcissistic sociopath/psychopath corrupt bigot lying cheat crook.. He was when he was a democrat businessman ripping off contractors. He still is. He was is and will be unfit for the office.

Now my question(s) still remains: What did Trump do to make your life better and what has Biden done to make it worse?
Fauscovai
1 up, 2mo
Probably not much of an improvement for Trump. But Trump did not made it worse as Biden did, and there are millions of people in United States that got screwed big time by Biden. Guess you are okay with your dollars loosing purchasing power and every other country in the world laughing at us. Maybe you are just selfish and not considerate for others. You will own nothing and you will be happy.
AN0NYM0US
1 up, 2mo,
1 reply
TDS? Trump Defense Syndrome? yes, you have it in spades.
Fauscovai
3 ups, 2mo
No I am just stating the obvious that life was MUCH better under Trump than under Biden's first 2 years. You are just salty about that because is true and your pride wont let you accept reality.
AN0NYM0US
0 ups, 2mo,
3 replies
You named one thing Trump "did" (Which he didn't:) The "wall" he said mexico would pay for. Biden is actually getting that done: https://www.theguardian.com/us-news/2022/jul/26/us-mexico-border-wall-friendship-park-garden

Everything else you mentioned are not actions by trump or biden. Maybe your comprehension is bad....
LordZerostrike98
0 ups, 2mo
"Fun Fact: My memes are great and no lies told about Trump. His cult members seem to lie though and deny the truth."

Bruh your being narcissistic. Your memes are cringe as they basically consist on thrashing on Trump for no reason. For example you defended the raid on his house and false accused him of having illegal documents when in reality Trump did not had any illegal documents. The raid on his house was unnecessary and supporting it means you support house invasion. And MAGA is not a cult, itsd a group who just like Trump. And MAGA does not lie nor denies any truths because what your saying are not truths but lies.

"Every accusation is a confession from the MAGA cult."

Good grief MAGA is not a cult, you don't even know what a cult is lol.
Fauscovai
1 up, 2mo
Yup Biden just wants to take credit for what Trump started because south republican states are dropping illegals in norther democrat states.
Yeah and you are a paid bot. Intentionality is the difference.
LordZerostrike98
0 ups, 2mo
Two things: A) Your anti trump memes are terrible. B)Trump did not had any illegal documents, that was a false statement that the FBI used as an excuse to raid his house. Also where you the one who permabanned me there?
LordZerostrike98
0 ups, 2mo,
1 reply
Fun fact: ANONYMOUS is a moderator in the politicsTOO stream, the stream filled with liberal propaganda. Not to mention he keeps making bad anti-trump memes and even lies about Trump.
AN0NYM0US
0 ups, 2mo
Fun Fact: My memes are great and no lies told about Trump. His cult members seem to lie though and deny the truth.

Every accusation is a confession from the MAGA cult.
Trashbuilder
1 up, 2mo
This looks like the usual witch hunt of globalism. That media does not have a good reputation for its links with Marxism. But I'm going to take a look at that. I'll tell you later.

About the antichrist, I am not going to continue discussing that, it seems to me that it is out of place in a rational discussion. I have already said what I had to say about that, I think there is no need to add anything more.
Trashbuilder
1 up, 2mo
Believe it or not, I have taken to review those links you have put.

It would take me a long time to analyze each accusation in detail. I think most people don't analyze what the media says, they just believe if it confirms their previously held biases.

In fact, most Trump supporters are surely unaware that Trump has said those phrases in which he is accused of lying. Someone with a lot of money has set up a whole machine to see anything Trump does or says, to try to use it against him. That's what I see.

In the West, these previously established prejudices generally come from other media, or from television, or education, and finally the majority coincide, either with the financial markets, or with the big technology companies.

And there are also the real cult groups, related to the above, which are not the ones you say, which are the ones that defend the new theories of Marxism, where critical theories are defended. These have a link to the financial markets where they deny the sovereignty of nations.

They try to subvert the constitutional order, to impose a dictatorship. They want to force people to think what they say.

Caption this Meme
Created with the Imgflip Meme Generator
IMAGE DESCRIPTION:
THEY WOULDN'T BE SO WORRIED ABOUT TRUMP; @4_TOUCHDOWNS; IF BIDEN REALLY GOT 81 MILLION VOTES
hotkeys: D = random, W = upvote, S = downvote, A = back
Feedback