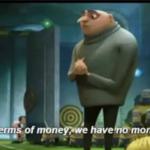 LowkeySus
1 up, 1m
I’m actually moving this week so I am leaving all my friends behind, so I know how he feels to lose the people you love most.
I was actually a little depressed a while back because of that.
Soap_The_Yachi_Simp
5 ups, 1m,
1 reply
Yes
.-Cutie_pie_Bazooka-.
5 ups, 1m
Yup
CalebDecker1
5 ups, 1m
An_ODST_On_Imgflip
5 ups, 1m,
2 replies
DavidTheVehicleMemer
2 ups, 1m
My dad doesn't really have gas price concerns
Awaterbucket
2 ups, 1m
super_monkey
4 ups, 1m
That can add up.
Titanic106
4 ups, 1m,
3 replies
Bruh gas went up by a ton the gas around my house was usually about $1.99 a gallon now it’s around $2.70
4deCompany
5 ups, 1m,
1 reply
Whew
EmporerCzar_Elect_JR
1 up, 1m,
1 reply
Right? Got to pay for illegal immigrants some how
Gumshoe
1 up, 1m
Looks like you’re slipping back into character.
davej1710
3 ups, 1m,
3 replies
Our hearts bleed for you in the US. Here in the UK it's currently around $1.82 PER LITER, or $6.90 per Gallon. Oh, its also rising too.
ImaginationCrew
1 up, 1m
HOLY CRAP
ImaginationCrew
1 up, 1m
that's expensive as heck bro
F
JaceAngel79_Official
1 up, 1m
EmporerCzar_Elect_JR
2 ups, 1m,
1 reply
Thank Biden cancelling contracts for pipelines to give Berkshire Hathaway the rights to move the oil. Oh and by that I mean 1200 train cars and 3600 trucks to do what a pipeline can do for free.
darko_yolo
1 up, 1m,
1 reply
Pipelines?
EmporerCzar_Elect_JR
1 up, 1m,
1 reply
A pipeline... (Which leads forward to other pipelines in future?)
darko_yolo
0 ups, 4w,
1 reply
What pipeline??
EmporerCzar_Elect_JR
0 ups, 4w,
1 reply
Keystone XL project to finish the pipeline, under Biden's eye - Colonial was cyber attacked and his constituents are calling him to shut down the Dakota pipeline.

Connect the dots - no cyber attacks on pipelines until the guy who shut down Keystone XL projects holds power. A guy whose party is pushing for Green energy. Also a guy who went to the enemy and gave the enemy areas that off limits for cyber attacks. Meaning he was ok with some items being cyber attacked...
darko_yolo
0 ups, 4w,
1 reply
Cancelling the (incomplete) Keystone XL pipeline changed literally nothing as far as the transportation of oil. Zero gallons of oil were flowing through it under trump and zero gallons are flowing through it now. Whatever way oil was being transported then is also how it is being transported now. So idk why you're going on about "1200 train cars and 3600 trucks" regarding the Keystone XL as if they are something new suddenly affecting the price of oil/gasoline and trying to blame Joe Biden for it.

I'm also not buying the bullsh*t dots you're attempting to connect as far as the pipeline hack/ Biden / dem's fondness for "green" energy/ off limit areas either..

Cyber attacks of many types have been escalating for years. Hacking 1 single password for that oil pipeline gave them millions of dollars...(although I understand the feds got much of that $ back). But ya maybe we should have paid more attention to cyber (and possibly biological) warfare "crisises" instead of a border wall with Mexico. At a time when congress had actually agreed on increasing the CISA budget to battle cyber attacks in the future , trump was trying to cut their budget by ~$150million dollars.

Also... oil pipelines are obviously part of America's Energy sector , which was one of the items Biden saying was saying was OFF limits to attacks... so I'm not sure where you were even going with the last part of your argument..(?)
EmporerCzar_Elect_JR
0 ups, 4w,
1 reply
It's called a futures market. Since the pipeline was cancelled, futures investors tighten up their pocket books which makes the price of oil go up. They determine this based on less oil being available to flow in the future.

Yes - it had a direct effect on price of gas.
darko_yolo
0 ups, 3w,
2 replies
My my my... How quickly we drop our initial statements... 200 train cars and 3600 trucks couldn't ditch a premise quicker than you just did bruh.
;P

But riiiight... futures markets. Exactly which oil commodity futures contracts are you attempting to claim were affected here by Biden cancelling Keystone XL? IF you can even produce a set of future contracts you claim were affected, I'd bet $ you have no proof nor sources backing up your claim.

I also can't help but notice that in this conversation about oil prices somehow you fail to even mention OPEC/ oil production nor the effect of the pandemic... I mean oil crashed pretty spectacularly (along with everything else) right around April 2020... Shouldn't have surprised anyone that the price would rise again as we came out of the pandemic. I'm just wondering if I should sell my oil stock now or wait a bit longer to see if it'll go higher.......... With a little luck it'll hit $100. I should write President Joe Biden a thank you letter! Lol
;P
EmporerCzar_Elect_JR
0 ups, 3w,
1 reply
No you aren't. Futures market on oil is a thing. Biden cancelling the XL pipeline caused had prices to go up. You're just a troll lmao. A troll who lives in imagination world.
darko_yolo
0 ups, 3w
Apparently I will have to ask you yet again....

Which specific contracts in the futures market increased in price due to President Joe Biden cancelling Keystone XL and what is your source supporting causation ?
EmporerCzar_Elect_JR
0 ups, 3w,
1 reply
Everytime there is some kind of oil crisis - the investors change their habits - the resulting effect is prices of gas go up.

When there is a major pipeline to deliver oil cancelled, that market say hey boys, this source isn't going to be here like we thought. So they change their habits and the price goes up. Like it has to where we are 75 cents to a dollar or more higher than we were this time last year.

Stop sucking warren Buffetts teat and pretending these things don't happen. We all get it, you're a next generation Nazi socialist and love having rich Democrats get richer.

What a moron.
darko_yolo
0 ups, 3w
Ah.. so it would appear I am correct. You have nothing beyond your feels supporting your argument. You talk about "futures markets" vaguely without any actual examples of them nor any sources supporting your claim.

Keystone XL was originally cancelled by Obama.. and then un-cancelled by Trump in January 2017.. and then re-cancelled by Biden in March of 2021... at which point 8 % of it had been completed. That's 8%... in 4 years. So how far out were these alleged oil commodity futures contracts which you think were affected by Biden's XL cancellation? A year? 5 years? A decade? 20 years? Oh right.... you have no idea.