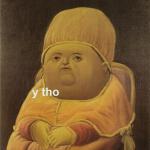 Caption this Meme
Best first
Latest first
Oldest first
149 Comments
[deleted]
16 ups, 6y,
6 replies
Anybody that thinks of deleting their account... DON'T. You will regret it, and it'll probably hurt for a long time.

I just don't feel the fun here anymore. Everybody is leaving now, the political memes are still going on, which is the whole cause of the downvote wars. I don't get involved in that, but it sucks when you can't get in a meme off with a fellow Imgflipper because they can't meme comment. If Imgflip would just get rid of the damn Improve Comment Reputations and comment timers, that would be literally the only way to make the downvote wars not as bad since a treaty won't work.

I don't have the time, I can't find much fun here anymore, and I've been out of meme ideas since June.

I should've just left without deleting my account, because we know most will return. I may be back sometime, but not for a while.

So for now, I walk out into the sunset, and leave you a: but as I said before
"I will leave this site when all the memers that I l go"
I have been running low on ideas for long time
and don't help this stuff keeps happing when I'm trying to help give support to other users.

also if you do come back to site we are here for ya
[deleted]
7 ups, 6y
[deleted]
6 ups, 6y
[deleted]
6 ups, 6y
I deleted my account two years ago... now I'm back. I never fully recovered from my meme addiction I guess.
That-Random-Banana
2 ups, 6y
welp...
Juicydeath1025
15 ups, 6y,
3 replies
Imgflip used to be fun, I've lost the will to make memes daily because it's freaking annoying that all this political nonsense is still going on! MemesterMemesterson, I feel bad for you, I mean I have had that thought of deleting my account as well, but I know that if I do, I will cause a major uproar of why I left and plus I'll be leaving my dearest friends I have met here on this site. Also, uncool that users would downvote you, I mean I even have been downvoted too for who know what (probably for being political...). I'll and the many users here who left a comment for you will be waiting for your return. Stay awesome, MemesterMemesterson!
[deleted]
5 ups, 6y
I'm not one getting downvoted, I said I'm mainly leaving because I've needed a break and I can't find much fun here anymore. You stay awesome too ;)
Otterplush
5 ups, 6y,
3 replies
Mainly, it was full of nonsensical but dank articles. There were not many exact memes on the front page though, but rather actual amazingly interesting images. Have YOU researched the times of the begining of Imgflip? It’s pretty interesting, there was this guy like Raydog always on the top, who although is inactive right now, has not yet deleted his account.
[deleted]
4 ups, 6y
[deleted]
3 ups, 6y
Here's a screenshot of imgflip from 2008. Just Google "WayBack Machine" to see more.
Juicydeath1025
2 ups, 6y
I think I know who you are talking about is it this user named toasty?
That-Random-Banana
5 ups, 6y,
1 reply
Juicy is a prime example of what this site needs. :)
Juicydeath1025
4 ups, 6y
Positive vibes everywhere!
Jying
11 ups, 6y,
2 replies
Well shit I didn't realize this crap was going on, political memes will probably always be around because our audience wants them or they wouldn't get upvoted. I've said for a while the downvote button just needs to go away since it is usually abused. Flagging is plenty good enough if somebody is out of line in my opinion. Hate to see you go, but I know you can't stay away brotha ;)
[deleted]
9 ups, 6y,
2 replies
I'll be back with a more alien-ish username ;)
[deleted]
9 ups, 6y,
1 reply
What if you had a "name the new memester" contest?
DashHopes
8 ups, 6y,
1 reply
I like this
[deleted]
5 ups, 6y
:)
Jying
8 ups, 6y,
2 replies
Ummm Ripley Tsoukalous?
[deleted]
10 ups, 6y,
1 reply
I'm thinking possibly nosretsemeMretsemeM.
DragonChild
6 ups, 6y
Nice! Imgflip needs a soft delete
PraytheReyAway
6 ups, 6y
Lol
IronWynch
4 ups, 6y,
3 replies
They get a lot of views and upvotes because most are being served to other sites and some memers are basically retooled telemarketers who are either in a cubicle or caught up in some work at home scam. Both democrats and republicans recruited paid spammers, and knowing that, political memers are either spam or chumps. It kinda doesn't matter which at this point. People advertising for a profit venture, including politicians, should at least be paying to post ads.
Jying
3 ups, 6y,
1 reply
Well that's an interesting point of view, one I don't agree with but not something I've heard before so there is that. Not saying you are wrong I'm sure that's possible, I've just got plenty of friends on here that make political memes and their main agenda is to be funny. Sure some lean one way and some lean the other, but in the end they just want to make fun of the assclowns and in my opinion both sides are right for doing so.

If a political meme does good on this site it has nothing to do with other sites at all. Sure things can be served out to other sites as you put it, but that won't make them popular here. There is a lot more to this site than that, you can think I'm wrong that's cool, changing my opinion on that point however is not going to happen.

I wish somebody would recruit me to be a spammer, if you hear of any openings let them know I'd gladly add more BS to imgur at what I'm sure they would consider a reasonable rate. Even if how they would be able to judge I made any impact in that steaming heap of prolapsed negativity I would have to leave up to the professionals.
IronWynch
4 ups, 6y,
1 reply
Most people get spam in their email every day of work at home schemes and scams. They give you instructions, and tell you how they track your output. Also, as I said, some are working from cubicles. They get a normal salary like a normal telemarketer. They tried to recruit me because I actually do work at home and have posted about it, so I get a lot of spam about it. I used to teach a few online courses, but the company sold and the new ones tried to steal my material, but I stopped them. All sorts goes on that the average person doesn't know about but every experienced webmaster does. There are even people getting paid to "like" and vote for things.

Then of course, there are the accusations from both sides about something they both do. That bit of it is funny.

It's not hard to find if you look...though most people (usually the guilty) prefer to claim that I'm crazy instead of doing the search.

Some few who don't have any vested interest or aren't deep in denial understand what I'm saying, and think about how the spam has poisoned the political memes well. Once I realized what was going on and that people didn't come here to be preached at, I did my thinking and stopped posting political memes even though mine were for neither of the normal sides. It's just not worth it to endorse the fleecing of the masses for profit even if what I'm saying really is different. I don't want to be associated with that mess or for anything I say to be misinterpreted as promoting that.
Natalie_vance
2 ups, 6y
You've been on here for over two years and have 20k points.
You've been spamming, chica.
IronWynch
3 ups, 6y
:: sigh :: To my haters...I don't know you and I don't really care if you live or die. imgflip.com/i/1ij7ct

To people who are not stupid: I really get why some people have enough. I joke that some folks are too oversensitive for the internet, but the truth is that not everybody's seen what I've seen, including enduring some of the trolling I've endured. You do have to develop a pretty thick skin to not gaf.

It may help to understand that personality tends to be pervasive. A very intelligent sociopath can lead a double life, but with most on the internet, "wysiwyg". Useless people always have an opinion about how the world should be, and that's always kissing their butt. It never changes. So let them have the internets. They have nothing else.

The unmoderated or low moderation areas of internet are not really the places to look for any validation. It's going to be a free-for-all for all the sh** and misery that lurks in the human soul, and the people with the most time and negative energy are going to be the most vocal. Just brace yourself for that and don't expect any better. This might help.

Just accept that anyplace that is allowed to be a sh**hole will be a sh**hole. Use the service sanely, focus on the people who don't suck as much, and if you know someone is a nutbar, don't talk to them. Trust Nature that they are as useless offline as they are online, and will eventually find their way into a circlejerk because they are the ones who need validation on the internet.

...and if a site you're on becomes a circlejerk, and you're not okay with that, fight it as long as the owner is fighting. If they stop fighting (usually because they're planning to sell or let it lapse because they're building something that won't become a sh**hole) the internet is a great big place...
renegade_sith
4 ups, 6y
Listen, some people make political memes because politics are an INTEREST of theirs.

Comments like these seem to be the ONLY thing you do on here. What does that say about you, that all you do is visit a meme site to complain about other users posting what they want?
Show More Comments
Flip Settings