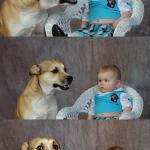 And the truth is, that it's barely 4%. Thanks for telling us that.
Immamegatroll
2 ups, 7y
Actually, slightly less than 4%.

"...they think that 23 percent of Americans, or almost one in four, are are gays or lesbians, a Gallup survey released Thursday revealed. That's way off: The polling organization most recently found that less than 4 percent self-identify as lesbian, gay, bisexual or transgender."

But accepting it as part of my everyday life, i.e. public marriage, making out in public, being aggressive with their cause instead of being respectful...(I've personally witnessed kids exposed to blasphemous depictions of "Jesus" on a cross-- in this case two butch lezzies tied together, making out.)

Yeah. THAT I'm gonna have issues with.
Da_epic_lorde
3 ups, 7y
Just as long as you don't marry someone of the same gender.
WhyMeme
0 ups, 2y
Well, the dog and the boy like each other ;) I'll let you do the rest
DerSchweigaa
0 ups, 7y
Show More Comments
Flip Settings

Caption this Meme
Created with the Imgflip Meme Generator
IMAGE DESCRIPTION:
DID YOU KNOW 1 ONE OUT OF THREE PEOPLE ARE GAY; WELL, I'M NOT GAY; NEITHER AM I
hotkeys: D = random, W = upvote, S = downvote, A = back
Feedback