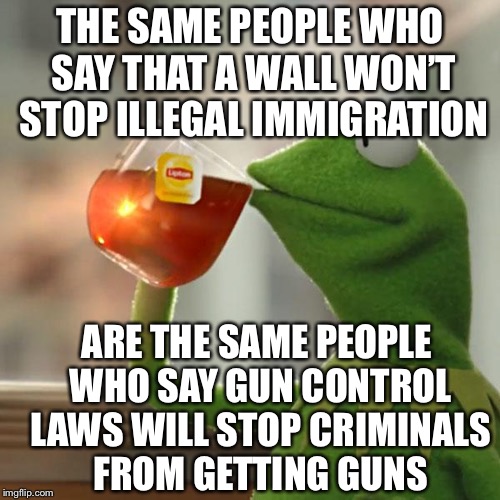 Confiscate guns?
Liberals?
Democrats that you said of someone else?

Where do you get this and other cutesy cartoonizations from?

And as a free gift here's one for ya: If your widdle pwethiouth gunz were gonna be confiscated, doubtful citizens are gonna be conscripted into militias seeing as the 1790s were a while back or ain'tcha heard?
synthetic-Mantis
4 ups, 3y
He should be a Senator.
SilicaSandwhich
3 ups, 3y,
1 reply
Yeah, most of these arguments are tu quoques.
SilicaSandwhich
6 ups, 3y,
1 reply
It's pretty sad when instead of making an argument against a claim, somebody just says "no u" and thinks it's a valid response.
jack_henoff
4 ups, 3y,
2 replies
Exactly, and with reducing things to some imaginary polarization where logic is supplanted by ad hominems instead of trying to reach some understanding or taking actual action.
SilicaSandwhich
2 ups, 3y,
1 reply
jack_henoff
4 ups, 3y
[deleted]
4 ups, 3y,
1 reply
jack_henoff
2 ups, 3y
Read your meme, read my meme reply, you confounded cretrin.
The very point YOU were trying to make was ironically lost on YOU.

I in a sense was agreeing WITH the point you were allegedly trying to make but that was totally lost on you because you're a low brow hypocrite incapable of understanding a simple biased repost.
Lover_Of_Truth
4 ups, 3y,
1 reply
Both won't completely stop either, but both will curb both the issues people are concerned about. It just comes down to what you think is a more serious problem.
SilicaSandwhich
4 ups, 3y,
2 replies
I don't think either will do anything.
felter
2 ups, 3y
[deleted]
2 ups, 3y,
2 replies
jack_henoff
4 ups, 3y,
3 replies
AfunnyUsername
2 ups, 3y,
1 reply
made me laugh.

crossing the street is not the only thing you ever do outside, dummy
jack_henoff
3 ups, 3y
Well shucky dee, ya got the Walmart parkin lot too, huh, Jeb?

Ya is smurt, who says y'all ain't got none o' them edumacashun thangs?

How many alts you have, guy, or all all these blitherng snowflakes truly that triggered out of empathy for my jab at your tragic urinary incontinence problem?
norsegreen
2 ups, 3y,
1 reply
jack_henoff
1 up, 3y
[image deleted]
Eldershire
2 ups, 3y,
1 reply
Wimps like you pee your pants when you hear the name of an inanimate object.
jack_henoff
4 ups, 3y
Um, yeah, ya sure got me there with that original zonker. Good one if I say so myself - oh, that's right, I already did say it in my meme that you borrowed that from.
SilicaSandwhich
2 ups, 3y
Not on that topic...
Scorn
2 ups, 3y,
2 replies
illegal immigrants come from planes not by walking mostly
look at Australia as a prime example of gun control
SilicaSandwhich
1 up, 3y,
1 reply
Look at Chicago as a prime example of gun control. You want to use anecdotes, how about I do the same? Also, in Australia, gun violence went down at an equal or slower rate after gun control than before it.
Scorn
0 ups, 3y
oh look thanks for that I forgot that you don't use anecdotes for this unless you have at least three to four of that support your argument while also making sure that there aren't things against it that you cant shoot down
Thank you
Scorn
0 ups, 3y
wait I only listed Australia and dished out a super weak argument for gun laws
look at this guy, forgetting to make a solid argument

Che Guevara was also a mass murderer who helped Castro seize power
SukaMadik
3 ups, 3y
[deleted]
1 up, 3y
That pic was of Che Guevara not Castro

But Yey, both were on the same page politically and both were mass murdering psyopaths.
1234Guy
1 up, 3y
> PrivateName
That was Fidel Castro, genius.

Maybe Google what you don't know first, genius?
[deleted]
2 ups, 3y,
1 reply
You mean this? https://en.wikipedia.org/wiki/Firearm_Owners_Protection_Act
[deleted]
1 up, 3y
Well considering you leftists downvoted my well sourced Wikipedia link doesn’t sound like you care to hear the truth either.
[deleted]
2 ups, 3y,
1 reply
PS nobody is against gun laws. We are against what you people want. We know what you people are really trying to do here is not make tougher gun safety laws but ban private gun ownership all together. You even said so yourself.
jack_henoff
3 ups, 3y,
1 reply
Who is "you people"?

You're something of a one line imbecile, shits kinda boring.
Your mimic alts don't make you look any less stupid.
low rated comment (click to show)
[deleted]
1 up, 3y,
1 reply
jack_henoff
3 ups, 3y
I am? Where did I say that? And should I register so that nematode sized shit for brains ya got won't rupture?