Not your typical politician 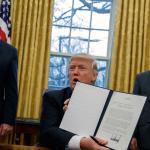 Just a thought. Have a great day.
Natalie_vance
4 ups, 5y,
1 reply
Everyone else?
You mean the little drops in the most crime ridden, most unemployed areas?
[deleted]
6 ups, 5y
No I am referring to whoever you were referring to when you put "It's tough when you're surrounded by wolves, repub and dem are the same. A bunch of anti human globalist bent on killing us. Even pence is looking like a traitor."
renegade_sith
5 ups, 5y
[deleted]
2 ups, 5y,
1 reply
AvgJoe
7 ups, 5y,
1 reply
I didn't expect the new president to nominate (and confirm his cabinet) AND fulfill every campaign promise in the first 30 days. After eight loooong years of having a president that picked and chose which laws he would abide by and which he would ignore (with an adoring and compliant media rarely challenging him), I find it refreshing that this president is attempting to do exactly what he said he would do. Actually, I wish he would slow down a little and improve upon his execution which right now is sloppy and not well thought out.
Is his combative and erratic personality a little scary? Sure, but apparently America found Hillary's corruption to be even less acceptable.
[deleted]
1 up, 5y,
1 reply
AvgJoe
6 ups, 5y
Many people (including myself) come to Imgflip to have a voice and to share ideas and opinions. I guess I never got the memo that memes were meant to be factually correct from all angles. I try to respect opinions that I don't agree with, either by ignoring them or at least not personalizing my criticism (except public figures). I respect your right to disagree with this right up until the point where you attempt to silence others. How does that help anything?
[deleted]
1 up, 5y
[deleted]
Show More Comments
Flip Settings

Caption this Meme
Created with the Imgflip Meme Generator
IMAGE DESCRIPTION:
IF A PRESIDENT ENDS UP DOING EXACTLY WHAT HE PROMISED DURING HIS CAMPAIGN; IS IT EVEN FAIR TO CALL HIM A POLITICIAN?
hotkeys: D = random, W = upvote, S = downvote, A = back
Feedback