Some people may disagree... 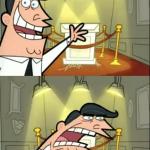 reply
Rainbowpalooza64
1 up, 5y
Thanks!
reply
CubbiesFan
2 ups, 5y
reply
Xemnas
0 ups, 5y
I support your run, Dank Vader
reply
WhyDoINeedAUsername
5 ups, 5y,
3 replies
reply
snekebekeliek
4 ups, 5y,
1 reply
How would that work? Having a 'single payer' system is only gonna increase spending, and a tax on speculating is only gonna give the government more money to spend.
reply
WhyDoINeedAUsername
2 ups, 5y,
1 reply
I would explain it to you, but I don't have any crayons.
reply
snekebekeliek
3 ups, 5y,
1 reply
It's not worth my time reasoning with someone that resorts to condescension when they can't think of an explanation for their position. Have a nice day.
reply
Chov
1 up, 5y,
1 reply
reply
WhyDoINeedAUsername
2 ups, 5y,
1 reply
reply
Chov
1 up, 5y,
1 reply
?When I ran for the Senate the first time, I ran against the wealthiest guy in the state of Vermont. He spent a lot on advertising — very ugly stuff. He kept attacking me as a liberal. He didn’t use the word ‘socialist’ at all, because everybody in the state knows that I am that. - Bernie Sanders
reply
WhyDoINeedAUsername
1 up, 5y,
1 reply
Academic commentators have pointed out that the identification of Sanders' political platform and ideology with "democratic socialism" is inaccurate. Samuel Goldman, assistant professor of political science at George Washington University, states that Bernie Sanders' platform is not socialist and is better described as "welfarism" reminiscent of the 1950s that aims to regulate rather than to replace capitalism. Goldman notes that Bernie Sanders does not advocate public ownership of the means of production, nor does he seek to abolish the profit system - both of which are defining characteristics of socialism.

Caption this Meme
Created with the Imgflip Meme Generator
IMAGE DESCRIPTION:
THIS IS WHERE I'D PUT AMERICAS GOOD PRESIDENTIAL CANDIDATE; IF WE HAD ONE!
hotkeys: D = random, W = upvote, S = downvote, A = back
Feedback
<![endif]-->