1,510 views • 59 upvotes • Made by NeverWoke 6 months ago in politics
joe biden no malarkey 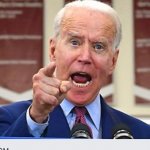 You title trump images but get mad when people title biden's

That's dumb of you

not very smart of you to do that
[deleted]
0 ups, 6m,
2 replies
I don't care about Biden memes, I just think that one is stupid. Believe me, if you come up with a good Biden meme I will upvote that shit.
[deleted]
1 up, 6m,
1 reply
lol ok bet ill send u a link

in this one i was trying to be funny
[deleted]
1 up, 6m,
1 reply
He certainly does appear to be sniffing hair. Why is he doing that?
DrSarcasm
0 ups, 6m,
1 reply
Trump
[deleted]
0 ups, 6m,
1 reply
sniffing hair is weird. pussy grabbing is evil.
DrSarcasm
0 ups, 6m,
5 replies
DrSarcasm
0 ups, 6m
He said to do it. Not that he did it. Locker room BS.
DrSarcasm
0 ups, 6m
I agree men should not talk like that. But Clinton set a new, lower standard for leaders when he separated his personal and office life (even though he was doing it in his offuce with an employee!). So, the liberals said as long as he performs in office we don’t care what he does in his personal life. I disagree, but that application is gone. To keep it even I say to the liberals, if it’s OK for Vlinto it’s OK fir all presidents after him. What do you say?
[deleted]
0 ups, 6m
he said it and he did it and you like it! Locker room bs my ass! I don't talk like that, my brothers don't talk like that my father doesn't talk like that. You do? you think it's cool and you vote for trump because you're racist an you love rape!
[deleted]
0 ups, 6m
[deleted]
0 ups, 6m
He said he did it and you voted for him any way and now you lie for him! You are going to Hell!
[deleted]
0 ups, 6m,
1 reply
https://imgflip.com/i/4vl7jl
[deleted]
1 up, 6m,
2 replies
What my real problem is, people who I like are becoming trump fanatics. I don't really want to fight but Americans who I like and want to chill with are completely bought into this MAGA bullshit. The worst thing is that they are being lied to.I can't get past the bad policies the racism and the misogyny. When you try to talk to them about it they say it's fake news but then they turn around and join proud boys.
[deleted]
0 ups, 6m,
1 reply
Im black. To be honest im not republican or democrat i have some republican agreements and some democrats agreements. i have some democrat pollicies and some republic so i guess ill be called independent or something. I Absolutely hate trump he's racist he's a liar (About certain things) But sometimes he's good i hate biden because he's racist he's a pedo (like trump) he sniff hair Like what??? who does that i wasn't alive then but remember in 1960 or 70's he said something like he didn't wan't his kids to grow up in a racial jungle and all that. that made me made plus MAGA make america great again really stands for make america white again( Owning slaves Segregation)
[deleted]
1 up, 6m,
2 replies
Im definitely not republican or democrat. I lean left, and I agree with you. And I don't agree with many people. I still have not found anything I like about trump, but I grew up in the city and most of my friends are black. Gay too. I had no idea there was any difference until I got older. In fact i'm still more shocked every day how hateful and ignorant people are. I'm getting old and I haven't been able to change anyones mind.Very frustrating. I always say to racists, if they knew or spent any time at all with the black people I know, they would change their mind. I know Ivy League educated blacks and I know gangster drug dealers who are white. Black suburban hippie chicks. for some reason people think blacks are all just one thing. When my mom couldn't afford thanksgiving dinner it wasn't white people that got us a turkey and made sure we had everything we need. It was my moms black roommate and her church. What I want to know is where are all the fiscally conservative social liberal people?
BidenAndTrumpBothSuck
1 up, 6m,
1 reply
Regarding your last question. Right here man!
[deleted]
0 ups, 6m
[deleted]
0 ups, 6m,
2 replies
Amazing Statement

its all just a system to separate eachother not unite...
[deleted]
2 ups, 6m
I guess we can put the squabbling aside, try to get along even though we disagree about stuff, build coalitions. Coexist. We are all Americans after all. And we are all being lied to.
Show More Comments
Flip Settings

Caption this Meme
Created with the Imgflip Meme Generator
IMAGE DESCRIPTION:
KILLING JOBS is my Mandate; MRA; MY Voters don’t like “Jobs.” And they HATE to Work!
hotkeys: D = random, W = upvote, S = downvote, A = back
Feedback
<![endif]-->