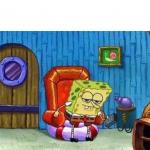 Well it doesn’t. The truth hurts.
reply
TheBigPig
2 ups, 2w,
1 reply
And creativity is only a factor in a meme. Doesn’t automatically make it good.
reply
UniformVictor
0 ups, 2w,
1 reply What I’m mainly hoping for is for comment readers to see this.
reply
Ragnorok_the_Destroyer
2 ups, 3w,
1 reply Are my messages equal to the most eloquent, profound, or most beautiful of writing? Nope, they're just... OK.

Caption this Meme
Created with the Imgflip Meme Generator
IMAGE DESCRIPTION:
WHEN YOU'VE MADE THE MOST CREATIVE MEME YET, BUT OTHERS MUCH MORE SIMPLER THAN YOURS GET MORE UPVOTES...
hotkeys: D = random, W = upvote, S = downvote, A = back
Feedback
<![endif]-->