Give him the respect that PETA won't. Happy (late) Birthday 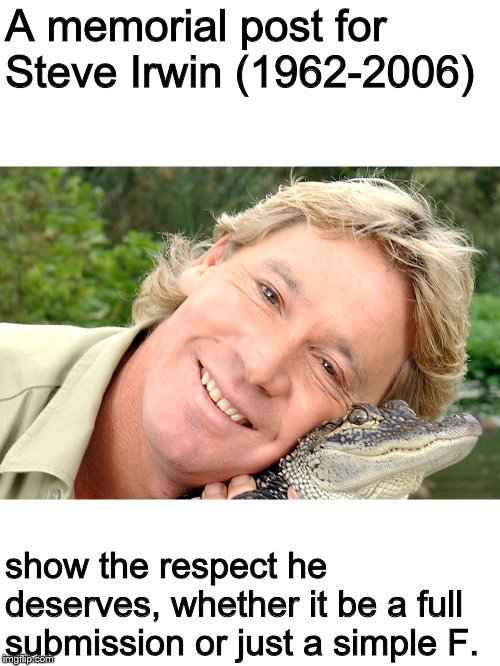 I loved Steve Irwin growing up cobber!
This joke doesn’t work with many other people though. I’m just glad he died doing what he loved best.
[deleted]
7 ups, 3y,
1 reply LordCheesus
6 ups, 3y
I made the front page mate!
What a beauty! Infinite F. Spell Card.
The Infinite F, For Infinite Respect. It Is Similar To The Infinity No U, But Is Respectful Instead of a Shield.
norsegreen
4 ups, 3y
I remember watching this show with my hubby. It was fascinating, and Steve Irwin was certainly not hard on the eyes. But I also remember his extreme recklessness when dealing with wild animals, which is why we decided it wasn't appropriate for our young children to watch. (And I didn't look at this through PETA eyes; they're a bunch of nuts ). It's just Irwin used no common sense, gouging at venomous spiders and picking up toxic snakes with his bare hands. So, when he was killed by one of the most gentle creatures of the oceans, hubby and I were not surprised. I am very sorry he was killed, but I do hope his kids learned to use the common sense their father ignored.
CaptainKirk10
4 ups, 3y
[deleted]
4 ups, 3y
May he Rest In Peace. Seemed like a good man, and respectable character with a passion for animals.
DoctorStrangelove
4 ups, 3y
You know, I’m not overly fond of Mother Teresa’s negligent treatment of those who were in her care. But I wouldn’t speak ill of her on her birthday!

It’s not her birthday is it?

Oh good. Irwin, much like Teresa, may not have always been exemplerary but I believe these people to be of good intentions and genuine passion for those they helped. It seems pointless and tasteless to mar their reputation post-mortem. Have some respect for the dead.
Some_Internet_Man
4 ups, 3y,
1 reply
When I say crikey you say mate! Crikey!
Slim.Shady
1 up, 3y
MATE!!!
DJCreepo
4 ups, 3y
The worst part is that I said that I wanted to see more but this was 4 years after his death when I saw it
zachfb
4 ups, 3y
Can we get some F’s in the chat?
UltraMemeDragon
4 ups, 3y
F
OneDankMemeLord
4 ups, 3y
F
supersaiynblueyasir
3 ups, 3y
F
BenjaminTanner
3 ups, 3y
Imbadatfortnite2007
3 ups, 3y
f
robroman
3 ups, 3y
F
Da_biggest_ork
3 ups, 3y
F
GrilledCheez
3 ups, 3y
Infinite F's
UllehS
3 ups, 3y
F
dannno
3 ups, 3y
f
Juantwothree
3 ups, 3y
One day I believe that we will see him again. A great man and thankfully his Family are carrying on his legacy. A thousand F's from me.
Horse_
3 ups, 3y
F
CameronLloyd
3 ups, 3y
LukeRPG
3 ups, 3y
F
LukeRPG
3 ups, 3y
kewlew
2 ups, 3y,
1 reply
what does f represent?
[deleted]
0 ups, 2y
Show More Comments
Flip Settings
Created with the Imgflip Meme Generator
IMAGE DESCRIPTION:
A memorial post for Steve Irwin (1962-2006); show the respect he deserves, whether it be a full submission or just a simple F.
hotkeys: D = random, W = upvote, S = downvote, A = back
Feedback