share
13,592 views • 110 upvotes • Made by zurvan 3 years ago
memesdistracted boyfriend 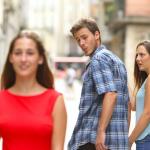 Millenials are the generation coming of age in this millenia, not a political orientation or some other demographic, btw.
reply
Beckett347
1 up, 3y lol
reply
SukaMadik
1 up, 3y
New Jersey & Connecticut are part of the NY economic engine also. Was running out of space in my meme.
reply
Memes_of_Memes
3 ups, 3y,
1 reply
The best part is is that socialism looks good in theory,but look what it did to venezuela
reply
AN0NYM0US
0 ups, 3y
ONE country that has a dictatorship. Look at EVERY other "socialist" country for the most part. Hell...look at China and they are COMMUNIST.
reply
[deleted]
5 ups, 3y,
1 reply
reply
Tombstone1881
4 ups, 3y,
2 replies
Very well, thank you. At least for those who have chosen to follow our 'imperialist' example and adopt free-market capitalism (Japan, South Korea, etc.). Not so well for those who cling to the old ways of Socialism or Theocracy.
reply
[deleted]
3 ups, 3y,
1 reply
Technologically advanced, but Cuban healthcare is far ahead of US healthcare. Not sure if the word healthcare is accurate enough to describe the abomination in the States.

And before I forget: say thank you to the Trump thing for getting out of the Paris agreements when you run out of clean air.
reply
Tombstone1881
3 ups, 3y,
2 replies
24ml9p.gif (click to show)

Cuban... heathcare...? ROFLMAO! I have no words... Communism has turned that country into such a massive dumpster fire that people eagerly risk their lives to get to Florida, providing they can manage to get around Raul's gangster soldier-police. Cuba is the **poster child** for why socialism doesn't work. You couldn't not have chosen a better third world s**thole to make my point for me. Thank you.

The Paris Accords? The same accords that gave China (among others) a free pass to pollute all they please, but put choking restrictions on US business? Businesses that are on the cutting edge of environmentally responsible technology? Are those the accords to which you are referring?
reply
AN0NYM0US
1 up, 3y
Look at China. Communist and doing fairly well. Because we buy everything from them. Our capitalism will kill us and strengthen their communism
reply
[deleted]
0 ups, 3y
Economic boycot by the US has sabotaged its economy. And whatever you think about its healthcare system, it’s still better than Obamacare ever was and that was the only poor attempt at healthcare the US has had in centuries.

By the way, someone else’s polluting is no excuse for the US to stop caring themselves...
reply
Antiath
1 up, 3y,
1 reply
Building a nation by enslaving black people and eradicating the natives. Then forget they wouldn't have made it withtout mass exploitation and pretend it was just honest hard work and free market. And finally, threathen other oil-nations that don't want their money and calling that "Freedom".
reply
Tombstone1881
0 ups, 3y
"...Building a nation by enslaving black people..."

Look, I'm not going to sit here and defend slavery, except to say that at the time it was a thing. They also hanged people for stealing livestock, and had sword and gun duels to the death out in the street. Not okay by modern standards. You cannot apply today's morality to what essentially amounts to an alien culture.

Twenty-seven thousand square miles of land in northeastern Arizona calls that a lie.

And to be fair, when you annex territory as expansionist conquerors do, the first thing you need to do is assimilate, pacify,or eliminate the existing population. Aztecs, Incans, Arrernte, Celts, Zulu, Mandinka, Mongolians, Siamese, Teutons, Gauls, it goes on and on throughout history. Compared to most, The U.S. has not been terrible, not saying we didn't do some really shitty things, but on historical balance we're the good guys.

It always comes back to the oil with you people, doesn't it? If we ever saw a drop of that oil come back here, you might have a valid argument. As for who threatened who first, well that's one of the better "chicken or the egg" debates. But one thing I can tell you, it goes back to a time before oil was even a thing.

You want to know what "freedom" really is? It's self-determination. It's 'government by the consent of the governed'. Liberty is the opposite of 'Dictatorship' and 'Theocracy'. If you're going to sit there and tell me that there was an Iraqi or Iranian without a gun to his child's head that would have chosen to be ruled over by a blood-soaked maniac like Saddam Hussein, or warmongering psychopath like Ruhollah Khomeini, then this conversation is ended.
reply
A_fellow_meme_farmer
3 ups, 3y
When people who support candidates like Bernie Sanders call themselves "socialists", they basically mean "welfare capitalists."
reply
who_am_i
2 ups, 3y
282mi3.jpg (click to show)
reply
[deleted]
5 ups, 3y
reply
BentheSpectre
0 ups, 3y
reply
Manhattan
3 ups, 3y
reply
Hand_Of_Doom
1 up, 3y
reply
nottaBot
0 ups, 3y
Interesting - I like it! :-)

Question though: How is Democracy treating them? Or anyone?

Instead of a two-party system, we need real candidates, with real plans.

Upvote for you. Waay up!
Show More Comments
Flip Settings
memes
gifs
other