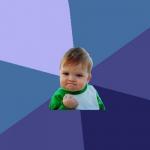 If we had 2 submissions instead of 3, I believe we would see fewer junk memes like that.
reply
[deleted]
1 up, 5y
Show More Comments
Flip Settings
memes
gifs
other