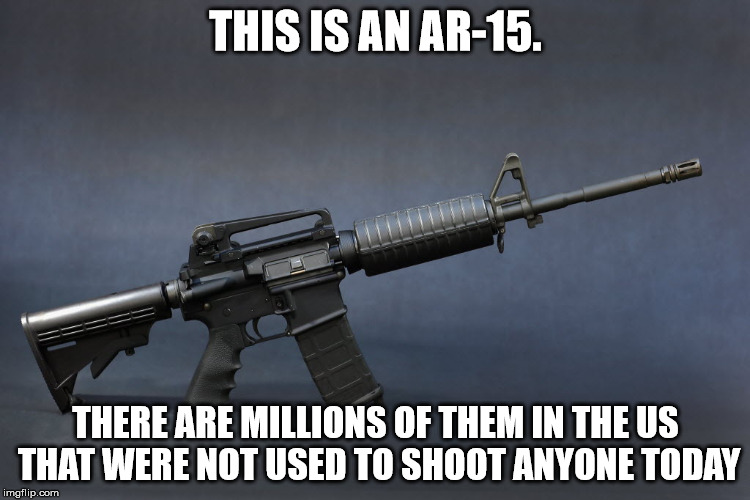 I am going to be 100% serious with you. No jokes, no sarcasm. I use mine to hunt. I can legally use an AR 15 with a full 30 round magazine to hunt in my state. I try to be a respectful, responsible, and ethical hunter. I also believe in my right to defend myself. My AR enables me to do both, while not spending more money on another firearm (guns an ammo aren't cheap).
I do take a fully loaded 30 round magazine hunting with me, not because I expect to use all 30 rounds, but because I never have to worry about having enough ammo.

Other than that, I just like the look of it. As I like to say, the AR-15 looks like a sports car instead of pickup. Family and friends have nice hunting rifles that have the ability to hold just as many rounds, that are semiautomatic, and actually have much better triggers than my stock AR.
skunkdynamite
7 ups, 6y,
1 reply
Failure of multiple government agencies is the problem. Ban government agencies...
JedaroJr
7 ups, 6y
tetsuoswrath
6 ups, 6y
Great meme dude. Mine wasn't. And mine is also not an "assault rifle". :{
LCARS43278
4 ups, 6y
JedaroJr
3 ups, 6y
imgflip.com/i/15tvgj
TheHangoverBanana
2 ups, 6y,
1 reply
It is sad to think all those AR-15s won't even get a chance to show what they can do outside of their illegal store from that alley over there... They will just stand in that gun shop waiting and hoping someone will once pick them up and start shooting at whatever... Afterwards they will painfully rust to their last days after which they will just be thrown out into the dumpster like a garbage bag... It's a sad, sad life an AR-15 has to live through... #freedomtoallar15s #stopgunabusement
[deleted]
1 up, 6y,
1 reply
i crie evry tim
TheHangoverBanana
1 up, 6y
Show More Comments
Flip Settings

Caption this Meme
Created with the Imgflip Meme Generator
IMAGE DESCRIPTION:
THIS IS AN AR-15. THERE ARE MILLIONS OF THEM IN THE US THAT WERE NOT USED TO SHOOT ANYONE TODAY
hotkeys: D = random, W = upvote, S = downvote, A = back
Feedback