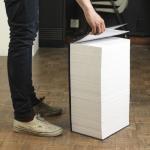 :)
snekebekeliek
3 ups, 6y,
1 reply
How? I thought it was based on how many points you have.
PraytheReyAway
3 ups, 6y
I don't know the imgflip algorithm for rating memes, but I've seen it happen where a person's front page meme is the very first meme they made.

Caption this Meme
Created with the Imgflip Meme Generator
IMAGE DESCRIPTION:
HOW TO GET YOUR VERY FIRST MEME; ON THE FRONT PAGE
hotkeys: D = random, W = upvote, S = downvote, A = back
Feedback