25,207 views • 98 upvotes • Made by metalgrinch 6 years ago
memesbeyonce superbowl yell 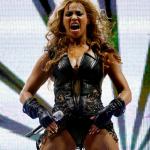 angelmc62
10 ups, 6y
anti police isn't all she supported that day....BLM, Black Panthers (racist-terrorist group)
Dankerson
8 ups, 6y
Forgot the scumbag hat! Lol
Invicta103
8 ups, 6y,
1 reply
Great job on this meme! Hope you get mega views! Good message on hypocrisy!
reallyitsjohn
9 ups, 6y,
2 replies
hip-hopocracy
AvgJoe
5 ups, 6y,
1 reply
HipHopcrisy?
angelmc62
1 up, 6y,
1 reply
HipHopRapcrisy :D
AvgJoe
1 up, 6y
Love it!
AvgJoe
3 ups, 6y,
1 reply
That could be a meme with Beyonce and the rest of the hip-hop hypocrites!
reallyitsjohn
3 ups, 6y
the anything for money gang
Peccy
6 ups, 6y
She's a superstar so she thinks she can get away with things like this. It seems she is back-peddling now pretty hard now when she's asked about it publically. Another star getting free publicity from a narrow-minded stunt. Great meme!
[deleted]
6 ups, 6y
[image deleted]
metalgrinch
4 ups, 6y
Hellz yea I made the front page!!!!!
stonegruve
5 ups, 6y,
1 reply
[deleted]
1 up, 6y
Great point.
UnComunSense
5 ups, 6y
Well spoke.
nomad11692
7 ups, 6y,
4 replies
So by this logic i should not criticize anyone whose services i need? Schools? Government? I live in inner city cleveland and i can tell you that the majority of the police officers (not all) that i have interacted with are unprofessional and feel that they are superior to everyone who they come in contact with. Often lazy and overly aggressive. Many officers need to focus more on being peacemakers and public servants rather than adrenaline junkies. The nationwide criticism of police is justified and long overdue.
reallyitsjohn
6 ups, 6y
I would challenge the statement that "The nationwide criticism of police is justified and long overdue." because in your part of Cleveland it "might" be. You need to look close at your local politics, something most people make no time for whatsoever. Does your city keep electing the same city council, the same mayor or how about just members of the same political party or race just because of a myth that they are the people that watch out for you.
angelmc62
6 ups, 6y,
2 replies
"pigs in a blanket, fry 'em up like bacon", "Burn this bitch down!" ??? NO, it is not justified. There are a few bad cops just like a few bad in any profession. But, the all out assault against our men in blue is shameful. Most are good hard working people with families and go above and beyond.
PraytheReyAway
2 ups, 6y
That's a good reality check. That kind of language isn't about shining a light on wrong behavior of police where it exists. It's taking a pose of calling for violence against them.
nomad11692
1 up, 6y,
1 reply
Calling for violence against police is wrong. However, if it was myself or a family member who had been on the receiving end of uncalled for police roughness i would want to kick some ass. Furthermore i think it is safe for me to take my experiences along with all the video footage of police bad behavior and make the assumption that this is a widespread problem. I also did note that not all are "bad". But way too many are. They need to focus on being peacemakers and problem solvers and move away from the "forcing you to comply" mentality. My experience is that they walk into situations assuming they know what is going on and the burden of proof is on the citizen to show they are not in the wrong.
angelmc62
0 ups, 6y
Police are not trained to pamper anyone's ass. Nor, should they be. I think you would have more reason to fear a family member being harmed by some thug on the street, than a police officer. Look how many innocent children being shot in chicago by stray bullets of street gangs (statistics will back this up). Parents need to start teaching their kids how to respond to police. Don't get mouthy, don't flee, don't reach for a weapon, don't attack, don't run toward in agressive manner etc. Criminal activity coupled with disrespect for authority is a deadly mix.
metalgrinch
5 ups, 6y
I'm with reallyitsjohn. Local government officials' job is to clear out the garbage. If things are as bad as you say they are, look at those who are the police's superiors. They are not the end all be all. YOU are paying their salaries. Vote correctly next time and make this issue more aware through whatever means you can.
BlackATTACK
0 ups, 6y,
1 reply
nomad, their opinion and views are different, because their reality is. Let's not pretend...please...that one side of town isn't superior to the other side; On the "good" side of the tracks, cops might offer help with directions and pull a kitten out of a tree for a little kid....But on the "bad" side, cops are aggressive, arrogant, can't-wait-to-bust-heads and cuff ya thugs. If not outright SHOOT your ass.

And the "good" and "bad" thing was intentional. There's GREAT human beings on the wrong side of town. And there's really snotty, sh***y people on the right side of the tracks. (And before people go apeshit and jump me, it's obvious there's great people on the better side of town; I'm making a point.)
nomad11692
0 ups, 6y
I agree with everything you say. I am trying to offer a viewpoint of a person who lives in an environment where the police are overly aggressive to let people know this is a real problem even from the perspective of a law abiding citizen. And that critisizing the police and then expecting them to help you is not hypocrisy. At my work I am expected to act professional, be respectful of others and put in a solid effort. I think it is absolutely reasonable for us to expect that from the police officers whose salaries we pay with our tax dollars. Also a disclaimer.....the majority of police departments in this country dont have a huge problem with these issues. But there are many that do.
[deleted]
4 ups, 6y,
1 reply
bluegamer
2 ups, 6y,
1 reply
[deleted]
1 up, 6y,
1 reply
bluegamer
1 up, 6y,
1 reply
im not calling u one
btw nice meme!
[deleted]
1 up, 6y,
1 reply
Oh, I'm sorry dude.
bluegamer
0 ups, 6y
[deleted]
4 ups, 6y
I bet if you put a hot dog in there it comes out fully cooked
BlackATTACK
1 up, 6y
skunkdynamite
0 ups, 6y
Wienerdawg
0 ups, 6y
imgflip.com/i/z5gl2
Show More Comments
Flip Settings