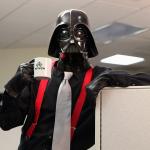 Meanwhile at the Disney casting office...

I'm just hoping that Disney's Episode VII will be a musical! Who's with me lol?

Caption this Meme
Created with the Imgflip Meme Generator
IMAGE DESCRIPTION:
IF YOU COULD JOIN THE DARK SIDE THAT WOULD BE GREAT
hotkeys: D = random, W = upvote, S = downvote, A = back
Feedback