I don't even know what to make of these people. 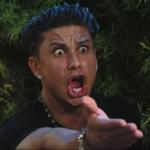 ProtoBird
4 ups, 7y
Uh, probably Muslims... (I'm Christian)
KenJ
1 up, 6y
HEY FOLKS, GUESS WHAT??? It ain't Christianity versus Islam. It's conservative 'fundamentalist' interpretations of both religions versus an open, caring modern acceptance of belief that treasures human beings in all their faults. And it isn't 'fundamentalism' at all to begin with, it's the self-interested interpretations of the 'followers' who have come after. Fighting over verses and suras are pointless when the arguers are interested primarily in their own need to be righteous. ISIS is a self-absorbedly brutal mangling of a belief of millions, just as the Westboro Baptists are interested in projecting their own mental illnesses onto the populace at large. If an acolyte is angry you can usually discount their claims of being a true follower.
Clockwork168
3 ups, 7y
Well, then they're probably Islamic...
TheLedZeppelinFanatic97
4 ups, 7y,
2 replies
A perverted form of Christianity founded by a rapist/pedophile/mass murderer that calls for unbelievers to be brutal killed and dehumanizes women. Yup! Let's defend that!
MCJ97
4 ups, 7y,
1 reply
So basically Christianity. Examples are:
Rape: Deuteronomy 22:25-29
Pedophilia: Genesis 19:1-38
Mass Murder: 2 Kings 2:23-24
Killing Unbelievers: Deuteronomy 13:6-11
Sexism: 1 Corinthians 14:34-35
And that's just one example verse per immoral action. There are tons of verses that demean women in 1 Corinthians alone.
TheLedZeppelinFanatic97
1 up, 7y,
1 reply
That's not Christianity. That's old Hebrew law that's supposed to be part of the old covenant. Just because it's mentioned in the Old Testament doesn't necessarily mean that's what Christianity is centered on. Also, the verses in Corinthians reflected the attitude held by Paul's contemporaries in that time period. Most Christians disregard that and don't hold such views on women.
MCJ97
3 ups, 7y,
1 reply
1 Corinthians is from the New Testament though...

Also, don't give me the "It's the Old Testament so it Shouldn't Count" bullshit. It's in the Bible, so it counts.
MCJ97
1 up, 6y,
1 reply
Also, Matthew 5:17-19 states that the Old Testament should be enforced because it has, and will always be, relevant.
OhioGTO
0 ups, 6y,
1 reply
Merely that something is recorded in the Old Testament doesn't mean it's in accordance with God's will. Lot's daughters? Seriously? The OT law didn't even yet exist when they seduced their father. Nice try.
MCJ97
1 up, 6y,
1 reply
Here is the statement in full:
Matthew 5:17-19 “Do not think that I have come to abolish the Law or the Prophets; I have not come to abolish them but to fulfill them. For truly I tell you, until heaven and earth disappear, not the smallest letter, not the least stroke of a pen, will by any means disappear from the Law until everything is accomplished. Therefore anyone who sets aside one of the least of these commands and teaches others accordingly will be called least in the kingdom of heaven, but whoever practices and teaches these commands will be called great in the kingdom of heaven.
OhioGTO
0 ups, 6y,
1 reply
My point stands. You cited an example hundreds of years before Moses gave the law and, in some cases, over a thousand years before the prophets.

He has shown thee O man what is good, and what does the Lord require of thee? But to do justly, love mercy, and walk humbly with thy God.
Micah 6:8
MCJ97
1 up, 6y,
1 reply
But Matthew takes place long after Moses gave out the Ten Commandments. Like, around a millennium and a half later.
OhioGTO
0 ups, 6y
And after the gospels (Acts & Romans, in terms of their canonical position), both Peter and Paul present a granular treatment of Christ's words that harmonizes his teaching. Jews and converts to Judaism have an obligation to the law in keeping with their conscience. Gentile converts to Christianity have no parallel duty to the law: faith by grace is sufficient. Abraham, Hebrews teaches, was declared righteous before the law. Thus the law cannot serve as an absolute precondition for righteousness.
TheLedZeppelinFanatic97
1 up, 7y
brutally*
low rated comment (click to show)
[deleted]
2 ups, 7y
Show More Comments
Flip Settings