Sound reasoning. If there's a flaw in it, who's driving that double standard? 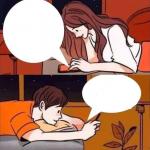 Caption this Meme
Best first
Latest first
Oldest first
12 Comments
[deleted]
1 up, 7mo,
1 reply
SaintRanger
0 ups, 7mo,
1 reply
The girl is a specter the boy is a wraith, their relationship is a phantom.

My realest pain is my imagination.
GODMYSON
1 up, 7mo
Exactly
regularfeller
1 up, 7mo,
1 reply I was petting my cats and banging my wife, so no shortage of pussy on my end. More than I can say for the first miserable 30 years of my life.
kevdex10
0 ups, 7mo,
2 replies
Nothing screams "perma-virgin" more than when someone tries to convince a stranger online that they're getting laid.
SaintRanger
0 ups, 7mo,
1 reply
And nothing screams neurotic insecurity more than projecting yourself onto a stranger online.
kevdex10
0 ups, 7mo,
1 reply
Strange how you have so much time for throwing temper tantrums. It's almost like you don't have any friends or a girlfriend to take up your free time. Imagine that!
SaintRanger
0 ups, 7mo
I suppose I could imagine that but it wouldn't resonate. Since you're bent on remaining detached from reality I'll leave the willful delusions to you. Or not.

It amuses me that you think I care what you believe one way or the other. What you think means nothing to me because you mean nothing to me. I just can't resist refuting verbal feces smeared on my memes. Though replacing everything I say with what you see in the mirror is neither creative nor interesting.

At least I'm committed enough to put my whole ass into my posts, instead of halfassing them like you. Unless a half-assed attempt is the best a halfwit can muster. I don't know what's more pathetic, the idea that you put actual effort into your worthless contributions, or that you can't even bother to try when you go out of your way to waste your own time doing something of no value.

Scratch that, I'm still laughing at what a retard you are, so thanks for that.
SaintRanger
0 ups, 7mo
Hold up, I found a hole in your theory even bigger than your sister's snatch: she kept insisting she was a virgin even though she still had some other guy's spunk running down her thighs. If she really wanted to convince me she was a virgin she shoulda bragged about all the cock she been taking. #catfishingfail
Show More Comments
Flip Settings

Caption this Meme
Created with the Imgflip Meme Generator
IMAGE DESCRIPTION:
I'M NOT READY TO GIVE YOU MY VIRGINITY; BUT I'D ALSO BE GIVING YOU MINE. IF MEN AND WOMAN ARE EQUAL THAT'S AN EVEN EXCHANGE
hotkeys: D = random, W = upvote, S = downvote, A = back
Feedback