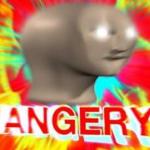 Bactalac
1 up, 2m,
1 reply
Womxnhatten because that's what they want to go by for some reason....
CONSTANTINEKANARI
1 up, 2m
Humans for smort right?
CR01
1 up, 2m Caption this Meme
Created with the Imgflip Meme Generator
IMAGE DESCRIPTION:
Feminists when they realize they're living in Manhattan instead of Womanhattan:
hotkeys: D = random, W = upvote, S = downvote, A = back
Feedback
<![endif]-->