I am not wrong 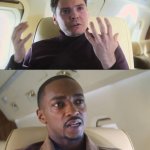 Caption this Meme
Best first
Latest first
Oldest first
6 Comments
GreenTigerSharkChanged
0 ups, 6m,
1 reply
smart
Madara.uchiha
0 ups, 6m
Thank u
Rithrius
0 ups, 6m,
1 reply
No. You would only disappear if you succeed in killing the relative, meaning the damage is already done and no paradox would occur. That relative wouldn't magically come back to life just because you disappear. You simply erased your entire family, including yourself, from history.
Madara.uchiha
0 ups, 6m,
1 reply
But if you kill them then after you dissappear it would mean that you don't and never did exist, so therefor you couldn't kill the relative, so the relative lives meaning you live. And because you live you kill the relative. And the cycle goes on until broken by someone else.
Rithrius
0 ups, 6m,
1 reply
[image deleted] Because the relative no longer exists, there is no chance of you ever existing, there would be no "you" to go back in time, but there also wouldn't be a relative to kill because they're already dead. You disappearing wouldn't bring them back because they're already gone. They are completely erased from the equation. There's no way for that relative to come back to life because physics are still a thing.

If you go back in time to kill a relative, you essentially erase your entire family tree from ever existing. It'll be like no one in your family ever existed in the first place and time would go on without them (and you) from the moment you killed the relative.

Essentially, you just created two timelines. One where your family never existed because a stranger murdered someone. And one where only you disappeared because you travelled back in time.

My point is, until time travel is physically possible (if ever), no one can determine what the rules of it are going to be or how the physics work. Therefore, your meme is a speculation, not a fact. And therefore, you are in fact wrong.
Madara.uchiha
0 ups, 6m
First off, this is way too long. Second off, even though I do not believe you or have the same opinion as you it I still see your point and respect it. But I still believe that if you kill a relative then they would die ( obviously), then because they died the whole family tree below them would also dissappear, including you. And if you dissappear from existence like that that means you were never born, and if you were never born then you could not kill your relative. And if you can't kill the relative then that means he would still be alive, and so would you, but then you would kill him because you and he is alive. This makes the paridox.
Show More Comments
Flip Settings

Caption this Meme
Created with the Imgflip Meme Generator
IMAGE DESCRIPTION:
IF YOU GO BACK IN TIME AND MURDER A DIRECT RELATIVE YOU WOULD DISSAPPEAR, MAKING IT IMPOSSIBLE FOR YOU TO KILL THEM, THEN THEY AND YOU WOULD BE ALIVE. THUS MAKING A INFINITE PARIDOX.
hotkeys: D = random, W = upvote, S = downvote, A = back
Feedback