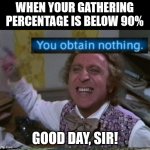 Screw Square Enix for killing Aeris in fun
Rithrius
0 ups, 4w
*Squaresoft
*Aerith
Omg... in fun
Rithrius
1 up, 3m
tbh, Rachel was kind of a Karen at some points in the show.
I am not wrong in fun
Rithrius
0 ups, 5m
[image deleted] Because the relative no longer exists, there is no chance of you ever existing, there would be no "you" to go back in time, but there also wouldn't be a relative to kill because they're already dead. You disappearing wouldn't bring them back because they're already gone. They are completely erased from the equation. There's no way for that relative to come back to life because physics are still a thing.

If you go back in time to kill a relative, you essentially erase your entire family tree from ever existing. It'll be like no one in your family ever existed in the first place and time would go on without them (and you) from the moment you killed the relative.

Essentially, you just created two timelines. One where your family never existed because a stranger murdered someone. And one where only you disappeared because you travelled back in time.

My point is, until time travel is physically possible (if ever), no one can determine what the rules of it are going to be or how the physics work. Therefore, your meme is a speculation, not a fact. And therefore, you are in fact wrong.
I am not wrong in fun
Rithrius
0 ups, 5m
No. You would only disappear if you succeed in killing the relative, meaning the damage is already done and no paradox would occur. That relative wouldn't magically come back to life just because you disappear. You simply erased your entire family, including yourself, from history.
batman vs superman, who do you think would win? in fun
Rithrius
0 ups, 5m
Whoever mentions Martha first.
Feedback