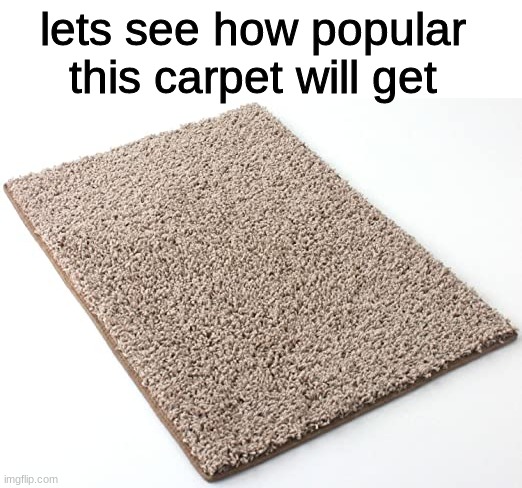 I’m sorry, but some people won’t want to read all this. Just setting a warning for those people.
HiImarandomdudeontheinternet
2 ups, 2y,
1 reply
Nah, I love internet flame wars
Shibe_Vibes
1 up, 2y,
1 reply
https://www.youtube.com/watch?v=jEEUmfW0qFQ

this is for you, if you haven't checked it out
HiImarandomdudeontheinternet
0 ups, 2y
OMG XD
THANK YOU FOR SHOWING ME THIS
Stupidbih6666
0 ups, 1y
I agree
atboh
11 ups, 2y,
3 replies
Not a beggar. People just like this random carpet and don't wooosh me
TheHugePig
15 ups, 2y,
6 replies
If the text “let’s see how popular this carpet can get” wasn’t there, would it still be getting love?

Didn't think so.
TheHugePig
7 ups, 2y,
1 reply
Bruh.
Did you not look at the text?
Nitroforshort.mp4
4 ups, 2y,
2 replies
he just wanted too see. You people make it such a big deal. U cant let the guy have some fun?

Bruh.
TheHugePig
5 ups, 2y,
2 replies
He wasn’t trying to have fun.
He was trying to get upvotes.

Learn the difference.
AProductiveMemberOfSociety
3 ups, 2y,
2 replies
Your like the Karen of upvotes and upvote begging.
[deleted]
4 ups, 2y,
1 reply
You're*
AProductiveMemberOfSociety
2 ups, 2y
Thank you
[deleted]
1 up, 2y
yes, ikr?
Digglebot
0 ups, 2y,
1 reply
i side with what_do_you_meme here because he didn't actually ask for anything, he just wanted to see what the reaction pf people to this random piece of carpet, like a social experiment. the weirdest things get popular on the internet, deal with it. :/
TheHugePig
1 up, 2y,
1 reply
“Let’s see how many upvotes this carpet can get.”
“Let’s see how popular this carpet can get.”
“Upvote this almighty carpet.”

See how those 3 statements all basically the same?
Digglebot
0 ups, 2y,
1 reply
no i don't
Gone-Deleted_official
0 ups, 1y
Then your as blind as Dora the explorer
low rated comment (click to show)
Nitroforshort.mp4
2 ups, 2y,
1 reply
TheHugePig
2 ups, 2y,
1 reply
Oh sorry. Didn’t see this until just now.
Perhaps you should be replying to my comments instead of your own.

And uh... I’m not doing any of those things.
I’m just calling him a beggar. And I’m telling other people that he is in fact one, and it’s bad that he is one.
I haven’t given any death threats or name calling.
Nitroforshort.mp4
1 up, 2y
I know, im not talking about you, im talking about a upvote beggar that was called out on the front page, trash talked, people hunted down his social media and send him threats, he deleted everything and was never seen again.
[deleted]
4 ups, 2y,
2 replies
he is telling you to upvote it secretly like how when you go to a store and see an ad for a product it makes you want to buy it, like when you see this meme it makes you want to upvote it to make it popular
Nitroforshort.mp4
4 ups, 2y,
3 replies
Good point, but going around filling the comment section just gives internet trolls more excitement to do it again. Just be the bigger man and ignore them, they wont want to do it again.
TheHugePig
7 ups, 2y
And we’re helping them not want to do it again.
That’s why we’re called discouragers. We criticize beggars.
TheHugePig
7 ups, 2y,
2 replies
And if they’re receiving hundreds of upvotes, then that’s why we need to come in. If they!e receiving upvotes, they’ll want to do it again unless we tell them.
Nitroforshort.mp4
6 ups, 2y,
2 replies
who are you to tell people how to use this site?
HenryKrinkle
10 ups, 2y,
2 replies
You're doing just that.
[deleted]
4 ups, 2y,
3 replies
THERE IS SO MANY COMMENTS
[deleted]
1 up, 2y
you think THATS a lot

well for your size
Nat_Guber
1 up, 2y
ANDROIDX59
0 ups, 2y
Nitroforshort.mp4
4 ups, 2y,
3 replies
How? How am I telling other people how to use this site
math_class
1 up, 2y
By telling people to not do this!
HenryKrinkle
1 up, 2y
"Just be the bigger man and ignore them, they wont want to do it again."
Nitroforshort.mp4
2 ups, 2y
thats a recommendation, and, also a life lesson, give bullys a reaction and they will do it again
TheHugePig
4 ups, 2y,
1 reply
It’s common sense not to upvote beg. We’re not changing the truth. We’re bringing it to people.
Nitroforshort.mp4
2 ups, 2y,
4 replies
And where is this legendary truth found? in the 5 seconds it took me to make an account. In the 5 seconds I thought this would be funny? in the 5 seconds I thought this entire site was for joking around

Did not know there were rules to making a funny picture with words.
TheHugePig
3 ups, 2y
You’ve been here for almost a year, and you still haven’t figured it out?

Upvote begging is always frowned upon. It is lazy, self-centered, and often subtle.
TheHugePig
3 ups, 2y
And don’t pretend that upvote begging isn’t any of those things.
Nitroforshort.mp4
1 up, 2y
of course it is those things, but people going around to police it isn't any better
Nitroforshort.mp4
1 up, 2y
Also here is a good example, like 1 month ago this happened and sparked tons of controversy.
The_Last_Doge
2 ups, 2y
you sound like a Karen who tells people off for random shit
[deleted]
2 ups, 2y,
1 reply
hey im glad you were open minded though

;p
GCPaint
0 ups, 2y
you should take my words with a pinch of SALT tho

Same meaning, worded differently.
Nitroforshort.mp4
3 ups, 2y,
3 replies
who tf cares, stop f**king judging everyone, who the hell are you? a f**king dictator
Nitroforshort.mp4
2 ups, 2y
cuz u little shits go around telling everybody else how to use this MEME site

Your replies have gone from semi logical arguments to “NOBODY CARES!!! YOU CAN’T TELL ME WHAT TO DO!!!”

Just a nice little time scale on how much you’ve changed.
[deleted]
0 ups, 2y
yeah good point
upvote_ur_meme
2 ups, 2y,
1 reply
that is kind of the whole point of posting a meme
TheHugePig
2 ups, 2y,
4 replies
No, it really isn’t.

The purpose of a meme is humor, not upvotes.
[deleted]
1 up, 2y
FrancisCuckworthIII
1 up, 2y
upvote_ur_meme
1 up, 2y,
1 reply
But apparently another porpose of a meme is sharing an idea publicly and he is doing just that not upvote begging
TheHugePig
0 ups, 2y,
2 replies
What’s the public statement? Worship the carpet?
upvote_ur_meme
1 up, 2y,
1 reply
yes
TheHugePig
0 ups, 2y,
1 reply
Well then you could wrap ANY meme around that argument.

“Oh the guy said ‘give me upvotes.’ That doesn’t mean he's begging. He’s just making a public statement.”
upvote_ur_meme
1 up, 2y,
1 reply
Oh, so the first thing that comes to mind to you is an argument
Don't you have anything better to do
TheHugePig
0 ups, 2y
I used “argument” as a noun relating to you.
You said “it was a public statement.”
That was the argument. I replied by saying that could apply that to any meme, even begging memes, so it’s not as effective as you think.
not_a_communist_spy
0 ups, 2y,
1 reply
yes. yes it is.
TheHugePig
0 ups, 2y
Well then you could wrap ANY meme around that argument.