They can figure out what to do with women later, if they ever DO reinstate the draft. 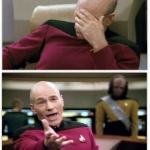 Caption this Meme
Add Meme
Add Image
Post Comment
Best first
Best first
Latest first
Oldest first
8 Comments
reply
angelmc62
3 ups, 11m,
1 reply
Can't say that I can argue with your reasoning even though I am a conservative female that doesn't go along with all that liberal shit.
reply
JakkFrost
2 ups, 11m,
1 reply
Well, I'm what I would call a "right-wing liberal", or perhaps the proper term is classical liberal, I'm not sure.

I don't buy into all the SJW bullshit like Baskin Robins' 31 Genders, or the wage gap myth, but I support gay rights, and just the whole idea that people should be able to do whatever they want as long as nobody else is adversely affected, that kind of thing.

I also support equal rights for women. However what I also am is red-pilled, and had the blinders removed about women several years ago, at least as far as feminist narratives go. Women HAVE equal rights, and more. Feminists go on about "living in a patriarchy" and the oppression of women, when it's pretty much the reverse.

So now, these days, I believe it's perfectly fine to put women on the front lines, but put them in gender-segregated units, so they're not a hindrance to male soldiers who would have to pick up the slack.
reply
angelmc62
2 ups, 11m
I support true gay rights. I believe they should have the rights that others are afforded by the government. I don't buy into that multi-gender stuff either. I don't like being force fed homosexual lifestyle 24/7. I am against abortion, for free speech, 2nd amendment, less Government at the federal level, but, I am also against the death penalty unless in horrific cases where undeniable proof is presented such as DNA,which is a stray from strict conservatism. I am a strong patriot and Nationalist.
reply
ToneDef
2 ups, 11m,
1 reply The first bill to give women the vote (in the US) included the requirement to sign up for the draft. Feminists, or suffragettes, or whatever they were at the time, got the bill stopped long enough to get that nasty little inconvenience removed.
reply
ToneDef
2 ups, 11m,
1 reply Caption this Meme
Created with the Imgflip Meme Generator
IMAGE DESCRIPTION:
AT THE MOMENT, I DON'T GIVE A RAT'S ASS WHETHER OR NOT THE DRAFT IS REINSTATED, IT'S A MOOT POINT; WHAT'S REALLY IMPORTANT IS THAT EITHER WOMEN SHOULD BE FORCED TO SIGN UP FOR SELECTIVE SERVICE IN ORDER TO BE GIVEN ACCESS TO THEIR RIGHTS, LIKE MEN ARE, OR THE REQUIREMENT SHOULD BE REMOVED FROM MEN
hotkeys: D = random, W = upvote, S = downvote, A = back
Feedback
<![endif]-->