Real Americans Were Taught To Question Everything The People In Government Do and Not To Blindly Follow. 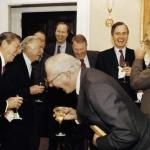 From 2003 through 2009 the GAO estimates “criminal aliens” were arrested, convicted and incarcerated for 25,064 homicides.

Since 1840 there have been a total of 374 people killed in school shootings.

So the FACTS say, that in a 6 year period illegal aliens have murdered 67 times more people than all school shootings in history.

BTW, over 3,000 teenagers per year are killed or injured in car accidents due to "Distracted Driving". Maybe we should ban cell phones for anyone under the age of 21.
reply
Meme-osis_Master
2 ups, 2y reply
LadyDeerHeart
0 ups, 2y,
1 reply
I don't deal in alternative facts like you do. I don't believe it because someone says so and I don't search out incorrect alternative facts that suit my narrative like you did. I don't believe manipulative "news" just because you do. 3,000 a year over distracted driving sounds low when statistically new drivers are the cause of most traffic accidents. Peddle you republican alternative junk propaganda somewhere else and if you actually do believe the bs you're trying to sell I suggest you take the time to read the truth. You'll find it EVERYWHERE except faux entertainment propaganda. *toodles!
reply
capt6550
2 ups, 2y You say that my facts are "Alternative" even though I reference a government site as a source. Yet, you present no proof, facts, or even a source to counter my argument.

You say that what you believe is the "truth", but you can't defend it with any logic or references.

You are such a typical leftist. No reasonable debate, just ad hominem, redirection, and red herrings. I feel sorry for you that you are so indoctrinated that you can't even have a discussion that goes against you unrealistic narrative.

The facts are clear. Illegal aliens commit crimes at a MUCH higher rate than legal residents. Your beliefs, feelings, or desires will not change that. Facts don't care about your feelings.
Show More Comments
Flip Settings
memes
gifs
other

Caption this Meme
Created with the Imgflip Meme Generator
IMAGE DESCRIPTION:
THEIR CHILDREN ARE BEING MASSACRED IN PUBLIC SCHOOLS SO INSTEAD OF DEFENDING THEIR OWN CHILDREN; WE'VE GOT THEM DEFENDING A WALL; THEY EVEN STARTED A GOFUNDME CAMPAIGN FOR THE WALL WHILE STILL REFUSING TO TALK ABOUT PROTECTING THEIR KIDS.
hotkeys: D = random, W = upvote, S = downvote, A = back
Feedback
<![endif]-->