Is This A Pigeon share
5,781 views • 49 upvotes • Made by UnsilentMajority 3 years ago
memesis this a pigeon 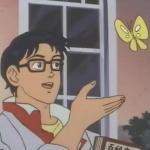 How about, "Illegal aliens are, by definition, criminals. Hence the 'illegal' part."
reply
FernandoPerez1
0 ups, 3y,
2 replies
That's true, but the crime is blown WAY out of proportion. It's INCREDIBLY hard to get into the country legally if your a poorer person, and Americans advertise this country as a land of opportunity, so our extreme patriotism (which isn't necessarily a bad thing, don't get me wrong) taunts these people looking for a better life with opporfunitues that are just out of their frasp. Many of these people are perfectly fine people otherwise, and there are very few cases of illegeal immigrants commiting crimes other than the initial border crossing. So yes, it is against the law to cross the border illegally. But we don't provide an easier way to citizenship or better access to green cards. Just because there are laws, doesn't always make them right.
reply
FightingUntruth
0 ups, 3y,
1 reply
Why should we provide a better way for citizenship for whoever feels like coming to America?

You know, there'd be less bank robbers in jail if we'd just provide a better way for them to get money that isn't theirs.
reply
FernandoPerez1
0 ups, 3y
Because we're a country of immigrants, and they're just people looking for a better life. Robbing a bank hurts people, because they people loose money. Crossing a border doesn't. Someone wanting to come into a country legally is not comparible to robbing a bank.
reply
UnsilentMajority
0 ups, 3y
"there are very few cases of illegeal immigrants commiting crimes other than the initial border crossing"

Right, right. All the illegal aliens come here and begin paying taxes and refusing government benefits they've done nothing to earn. Guess what? Sneaking into the country illegally is a crime. Not paying taxes on their income is a crime. Collecting government benefits with fake IDs or through other subterfuge is a crime (even if the Democrats use it to pander for votes - which are also illegal when you're not a citizen).
So, no, you're wrong. "Very few" of them DON'T commit further crimes when they get in. But oh, there I go making more racist comments...

Look, I've been through the immigration process. Yes it's a pain in the ass. Yes it takes a long time and even longer to become a citizen. And yes, the government (usually) wants fees to compensate it for all the time and people required to process and vet the paperwork. In many cases, the problem is that foreign countries just don't bother with paperwork. Birth certificates? Medical records? Criminal background records? Who has time for that? And thus those people have a harder time getting in the country because we can't vet who they are. That's not racist, it's protecting the country. Their desire to "live a better life" does not override that.

"Just because there are laws doesn't always make them right."

Well thank God we have liberals to tell us which are right and which are wrong. The same people legalizing drugs to make the ghettos even worse and supporting an abortion industry aimed at culling the populations of minorities then turn around and tell us our immigration policies are racist.

Really, think about it for a minute.
reply
boredmeme
2 ups, 3y,
1 reply
More blacks are incarcerated because more blacks commit crimes.
reply
FernandoPerez1
0 ups, 3y,
2 replies
More blacks are incarcerated per year because of being trapped in areas like ghettos and projects, where crime is rampant thanks to lack of options and opportunities and where they're told they'll never get out unless they're lucky or extremely talented. Things like gangs are groups that are founded on peer pressure and turn otherwise good people to lives of crime. They got there thanks to leftovers from racist blockbusting that took place pre-civil rights movement. The statement isn't racist, but the way they got there is entirely racist.
reply
FightingUntruth
0 ups, 3y,
1 reply
How did they get there? That's a retorical question; you can thank government subsidized housing...

Good job democrats </sarcasm>
reply
FernandoPerez1
1 up, 3y
That issue is more complicated than democrat or republican. It was an issue of north and south. Do a little more research.

This video is about the republican party, but talks a lot about the history of democrats as well.

https://m.youtube.com/watch?v=s8VOM8ET1WU
reply
boredmeme
0 ups, 3y,
1 reply
"Where they are told that they'll never get out unless they are very lucky or extremely talented"
And who exactly tells them that? Other blacks and liberals in a culture that encourages them to not even try and then blame others for thier failure when THEY DIDN'T EVEN TRY?
The culture is a problem, but refusing to punish crime because it's "mean" and somehow "racist" does nothing to help and encourages it to persist. The situation is actually getting worse too. Schools use to be able to expel problem students and put them in a special program for problem students. While this admittedly did little for the problem students (who had no attention of even trying), it did remove disruptions so the other 30 students could try. But at some point it was decided that it was racist to expel problem students (because most who were problems we're black, and thus most who were expelled were black). It was liberals who decided to sacrifice the chance of 30 other black students to preserve the "chance" for the one.

And if racism is how they got there, why are today's blacks actually worse off than blacks shortly after Jim Crow laws were abolished? There is a current liberal culture that abhors accountability in any form. Single mothers, who got there through thier own choices (I'm not talking about rape victims or widows) are encouraged to view themselves as victims of deadbeat dad's, even when they're not even sure of who the dad is. (People are likely to argue that I'm s**t shaming and that it's unfair that women hold most of the responsibility, and to some degree, they are right. But in a promiscuous culture, paternity is often uncertain while maternity is certain. It is simple biology that has placed this burden on females. And while it's not "fair", chastity is more important as a form of self preservation for women than is for men)
Yes there is a lot of negative history, but that doesn't invalidate enforcing standards.
reply
FernandoPerez1
0 ups, 3y,
1 reply
I'm not saying the crime shouldn't be punished, of course it should. But we don't do anything BUT enforce crime. We don't do anything to help black people get out of ghettos and projects.

I'm not saying that blacks aren't incarcerated more, I'm saying that the only race aspect is partially due to these problems.
reply
boredmeme
0 ups, 3y,
1 reply
Like I said, one of the best ways to improve schools, and thus opportunities, is remove ving problem students. Another way of improving schools is charter schools and voucher programs.(programs liberals hate despite the extensive evidence that they help minorities)
Another way would to be to re-institute bussing programs to allow students to go to schools outside where they live (thus in a better area with a better tax base).
School choice is the number one thing that can be done to help blacks, but liberals fight it tooth and nail.
reply
FernandoPerez1
0 ups, 3y,
1 reply
I've never met a liberal who's opposed to charter schools, for one.

Removing problem students helps the rest of the class, like you said, which is a good start. However, there needs to be a way to help the problem kids. Separate schools for children with behavioral problems have helped many kids, as long as the teachers are good, and that'sa very important part of it. I know this first hand. When I was younger, my mom worked at a school similar to that, where kids who have had behavioral or academic problems go. But instead of railing students for irresponsibility or treating them like "problem students," she listened to their problems and their concerns, and learned that many of these kids really were good kids, but they're bogged down by home life, the majority of the time. They're raised in hostile home environments, where they go through, neglect, abuse and abandonment. Frankly, if you've got problems like that, you're not gonna be very captivated by school, either. She's helped more students than she could've imagined in the two years she was there.

Which brings me full circle to the race problem: it really is about how they're raised. When you grow up in the ghetto or in projects where the most powerful people around you are gang leaders and crack dealers, and almost everyone around you has lived there for years, you're going to get the idea that crime and gangs are the only (or at least most efficient) way of becoming successful, even if it means you'll probably be dead or in jail by the time you're 20.

There's a phenomenal novel called "If I Grow Up" by Todd Strasser that follows this exact problem. You should check it out, because it captures the mindset of these children really well (and it's a great story, setting that aside).
reply
boredmeme
0 ups, 3y,
1 reply
I think we're mostly in agreement, except that most liberals (at least in California, where I'm from) vehemently oppose charter schools because they "cost teachers jobs", "take money from public schools", and "don't have to follow the same ciriculum as other schools".
reply
FernandoPerez1
0 ups, 3y
As a liberal, I can attest to not believing that at all. There's nothing inherently wrong with private schooling or charter schools.
reply
FightingUntruth
1 up, 3y,
2 replies
White people can't dance
reply
boredmeme
1 up, 3y,
1 reply
LMAO
It's true though
reply
FightingUntruth
1 up, 3y
I try my best though... Beer helps
reply
FernandoPerez1
0 ups, 3y
That's just truth
reply
FightingUntruth
0 ups, 3y
Not as much popularity on this meme
Show More Comments
Flip Settings
memes
gifs
other