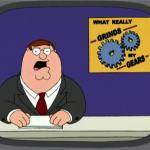 reply
Poster_Nutbag
7 ups, 3y,
1 reply
I'm not a republican and I don't like Trump AT ALL. I've met the guy and IMO he's a complete tool. 3D chess my ass! He's a puppet of the military. I can't believe people think he's some kind of god either. But that doesn't change the double standards in the liberal approach to EVERYTHING. That's all I'm pointing out here.

I also can't believe people think Trump is some sort of god. Especially since I know what kind of person he really is. He IS a jerk, but he's not a racist. Sorry, that's your programming showing.

And about programming, TV is called programming for a reason. When you vet your own facts, a new world emerges. One in which we are pitted against one another using anything possible as a wedge (religion, race, sexuality, $, etc) while the power elite laugh up their sleeve and count our money. If you align yourself with either of the two major parties in this country, YOU are the problem.

The most dangerous thing you can do in this country is think for yourself.

I encourage you to be dangerous.
reply
[deleted]
1 up, 3y
Assholes get all the chicks. Being a big jerk makes him a big winner. 'Merica!
reply
DashHopes
6 ups, 3y I'll wait....
reply
MauiOnion
4 ups, 3y,
1 reply
Here's 12.... But if you want more, I firmly believe that the person to hold the highest office in this country should be able to conduct themselves in a respectful and respectable manner, to not only serve as a role model for the nation's youth, but also to be the international face of the American people. Trump's antics, his lack of experience in government, his lack of civility and maturity when he takes to social media and in meetings and press conferences, his dishonest boastful manner, lack of common sense when it comes to national security and intelligence, his disturbing sexual feelings toward his daughter, the things he's said about women over the years, the things he says about people of color, his complete lack of connection to the working class, his elitist, corporate mentality, his total disinterest in keeping his campaign promises or doing anything positive for the citizens of this country or the environment...By far THE worst excuse for a president this country has ever had!
reply
JunkYardMemes
2 ups, 3y,
1 reply
Isn’t it a little idealistic to think that hookers and date rape would somehow disqualify a ruler?
reply
MauiOnion
3 ups, 3y
Are you referring to his accusers or the pee pee tape?
reply
synthetic-Mantis
5 ups, 3y
I wouldn't give Clinton that pass.
reply
LindseySquire
6 ups, 3y,
1 reply
What grinds my gears is when people act like Trump is a god. News flash: he's a lying racist whose side hobbies are avoiding taxes, assaulting women, and leaking confidential information to other countries. Yes, Clinton (Both of them) did some stupid, rotten stuff-everyone does. But Trump's behavior toward...everyone... is not excusable. He's a dishonest, unintelligent person. If I ever wanted to kill myself, all I'd have to do is climb up to his ego and jump down to his IQ.
reply
TrueAmericanPatriot
6 ups, 3y,
1 reply
1) Not everybody does rotten, stupid stuff.

4) If we're judging someone on their IQ, he actually has a higher IQ than Barack Obama AND Hillary Clinton.

5) Please show examples of Trump's horrible behavior toward everyone.

I'll wait...
reply
LindseySquire
2 ups, 3y,
1 reply
1. So you're perfect? Wow, that's amazing! Good job! *Sarcasm*
2. According to Huffington Post, "Trump implied that Gonzalo Curiel, the federal judge presiding over a class action against the for-profit Trump University, could not fairly hear the case because of his Mexican heritage.
“He’s a Mexican,” Trump told CNN of Curiel. “We’re building a wall between here and Mexico. The answer is, he is giving us very unfair rulings — rulings that people can’t even believe.”
Curiel, it should be noted, is an American citizen who was born in Indiana. And as a prosecutor in the late 1990s, he went after Mexican drug cartels, making him a target for assassination by a Tijuana drug lord.
Even members of Trump’s own party slammed the racist remarks.
“Claiming a person can’t do their job because of their race is sort of like the textbook definition of a racist comment,” House Speaker Paul Ryan (R-Wis.) said in a reaction to Trump’s comments, though he clarified that he still endorses the nominee."
3. Well, as said on vox.com, "First a tape of Donald Trump from 2005, describing how he treats women — "Just kiss, I don't even wait… Grab 'em by the pussy… When you're a star, they let you do anything."
Then, on Wednesday night, three women came forward in media interviews to say that Donald Trump had, in fact, kissed them without consent or touched them inappropriately — two in interviews with The New York Times and another to the Palm Beach Post. A fourth, a former Miss Washington, posted on Facebook earlier this year that Trump had "grabbed her ass" while she was participating in the Miss USA pageant."
4. According to a fact-checking website called Snopes, "This article is chock-full of logical missteps and factual inaccuracies. Donald Trump’s official school transcripts are not available, so it is impossible to know his actual scholastic aptitude scores. While the article’s author used Wharton’s general admission requirements to estimate Trump’s IQ, the math still doesn’t quite add up.
According to PrepScholar.com, Wharton’s SAT requirements are currently set at 1500. This roughly translates to an IQ score between 145 and 149, not 156. Regardless, Wharton’s admission requirements are irrelevant, since Trump did not enter Wharton as a freshman. He transferred there his junior year, and Wharton does not list SAT scores among its requirements for transfer students." I will finish in a moment.
reply
TrueAmericanPatriot
4 ups, 3y,
1 reply
HufPo? Vox? Snopes? What kind of sources are those? Some of the most lying, anti Trump sources you could provide. Yeah, I'll just file this under, "there is no real evidence of anything."
reply
LindseySquire
2 ups, 3y,
1 reply
I'm not done yet. Here goes:
4. (The rest of it): Snopes also stated, on the claim that Obama's IQ was 102, "But of course, nothing about the article was true. U.S. presidents are not routinely administered IQ tests, and the story was merely another piece of fake news from Empire News, a site that creates outrageously fictional clickbait stories in order to lure readers into generating advertising revenue for them. The site’s disclaimer notes that: Empire News is intended for entertainment purposes only. Our website and social media content uses only fictional names, except in cases of public figure and celebrity parody or satirization." Hillary's IQ, while not confirmed, is said to be around 140, give or take a few.
5. Here's 12 quotes from Trump himself that prove he's an awful person-this one, you can't say it's a bad source, because the source is Trump. This list was taken from Odyssey, BTW: "1. “You know, it really doesn’t matter what the media write as long as you’ve got a young, and beautiful, piece of ass.” - Esquire, 1991
2. “Our great African American President hasn't exactly had a positive impact on the thugs who are so happily and openly destroying Baltimore!” - Twitter, April 2015
3. “If Hillary Clinton can't satisfy her husband what makes her think she can satisfy America?” - Twitter, April 2015
4. “I have never seen a thin person drinking Diet Coke.” - Twitter, October 2012
5. “You're disgusting.” - To a lawyer who wanted to pump breast milk, 2011
6. “Stop the EBOLA patients from entering the U.S. Treat them, at the highest level, over there. THE UNITED STATES HAS ENOUGH PROBLEMS!” - Twitter, August 2014
7. “I get called by a guy that can't buy a pair of pants, I get called names?” - To a disabled reporter, November 2015
8. “I watched when the World Trade Center came tumbling down. And I watched in Jersey City, New Jersey, where thousands and thousands of people were cheering as that building was coming down. Thousands of people were cheering.” - A rally, November 2015
reply
LindseySquire
1 up, 3y,
1 reply
9. “Look at that face! Would anyone vote for that? Can you imagine that, the face of our next president?! ” - About Carly Fiorina, Rolling Stone, September 2015
10. “You could see there was blood coming out of her eyes, blood coming out of her whatever." - About Megyn Kelly, August 2015
11. “Donald J. Trump is calling for a total and complete shutdown of Muslims entering the United States until our country's representatives can figure out what is going on.” -Press Release, 2015
12. “The other thing with the terrorists is you have to take out their families, when you get these terrorists, you have to take out their families.” - December 2015"
Thank you for your time.
reply
LindseySquire
1 up, 3y,
1 reply
I will also mention that these things from quotes FROM HIM also show how racist and sexist he is....
reply
[deleted]
1 up, 3y,
1 reply
None of that is racist or sexist. Half of what you pulled out is just random hearsay or chopped up quotes taken out of context. Seriously, calling Obama "African American" is not racism.

Believe it or not, a lot of women like to be treated like objects and be dominated by a guy with the finesse to pull it off. Why do you think 50 shades of grey got so popular?

What you and the media don't understand is that when people that aren't drunk on the kool-aide see him say those kind of things it reaffirms the reason we voted for him. He's real, he calls it like he sees it, and he's not a pussy. Politically incorrect? Hell yeh!
reply
LindseySquire
1 up, 3y
"Just kiss, I don't even wait… Grab 'em by the pussy… When you're a star, they let you do anything." This was one of my reasons, as you recall, for how sexist he is. Just because some women like being playthings of sexist men does not make it right to treat every woman like a plaything. I mean, for example, if an African American liked being called racist names, does that give you the excuse to call every single African American in the country a racial slur? No, it doesn't, because the majority would find it offensive. And I apologize, I didn't mean for it to come across as saying that African American is racist. If you want the full quote to what I put before, you can look it up. It was really quite atrocious. It does make me wish that England would take us back. But I do respect the fact that you voted for him because he calls it like he sees it-that is rare in a politician. Granted, he's not a politician, so that may be why.... Anyway, I'm sorry if I insulted you, I didn't mean to. Let's agree to disagree, shall we?
reply
[deleted]
2 ups, 3y,
1 reply
reply
[deleted]
1 up, 3y,
1 reply
reply
[deleted]
0 ups, 3y
I know that. I'm not really that much of a conservative...
but I am offensive and I find this smashing my sister while I'm imgflipping.
(JK)
reply
BentheSpectre
4 ups, 3y,
1 reply
reply
Poster_Nutbag
5 ups, 3y,
1 reply
reply
BentheSpectre
7 ups, 3y
reply
[deleted]
2 ups, 3y
Or the left that matter
Show More Comments
Flip Settings
memes
gifs
other

Caption this Meme
Created with the Imgflip Meme Generator
IMAGE DESCRIPTION:
YOU KNOW WHAT REALLY GRINDS MY GEARS? LIBS GET INCENSED ABOUT A RUMOR OF SOMETHING TRUMP ALLEGEDLY SAID ABOUT HAITIANS; BUT GIVE THE CLINTONS A PASS AFTER THEY DEMONSTRABLY STOLE HUNDREDS OF MILLIONS IN DONATIONS FOR THE VERY SAME PEOPLE.
hotkeys: D = random, W = upvote, S = downvote, A = back
Feedback
<![endif]-->