Take a page from Bill's book... He knows the American Way 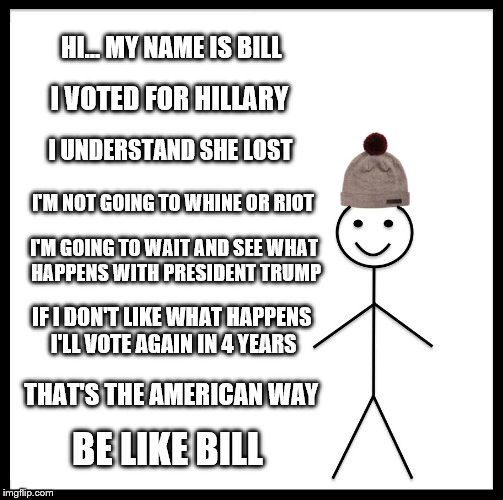 [deleted]
9 ups, 6y
satyricon
2 ups, 6y
Jasooty
18 ups, 6y,
1 reply
[deleted]
12 ups, 6y
FlameWar
19 ups, 6y,
1 reply
davej1710
2 ups, 6y,
3 replies
I'm Dave, and I'm the opposite of everything you said. I bet more Dave's vote, have opinions and make effort every time than most other names. Dont be Dave'ist. Give Dave's a chance. "I still have a dream, a dream deeply rooted in the American dream – one day this nation will rise up and live up to its Daves, "We hold these Daves to be self evident: that all names are created equal." I have a dream..."
FlameWar
2 ups, 6y
ButtChicken
0 ups, 6m,
1 reply
Soooo you’re one of those dumb trump people?
davej1710
0 ups, 6m,
1 reply
Soooo you’re one of those dumb people?
I'm not even from the USA and certainly don't like Trump. Where did that connection even come from?
It was a joke that clearly went over your head. Its a parody of a famous Dr Martin Luther King quote.
ButtChicken
1 up, 6m,
1 reply
Damn bro, I am stupid. So sorry bro.I thought you were… honestly I don’t even know. Sorry, have a great day.
davej1710
0 ups, 6m
No worries. Dave's are pretty forgiving too? ;-)
CommandoCody2015
0 ups, 6y
Mr. Silent Majority wishes our Canadian Dave best wishes... ..imgflip.com/i/1eogpb
Simonsays01_19
17 ups, 6y,
1 reply
Im democrat and I completely agree with you!!
[deleted]
6 ups, 6y
Jaysbaseball19
10 ups, 6y,
2 replies
[deleted]
7 ups, 6y
CommandoCody2015
6 ups, 6y,
1 reply
Thank you..
Jaysbaseball19
5 ups, 6y,
1 reply
No thank you...This site could more memes like this one! (y)
Jaysbaseball19
4 ups, 6y
use
That-Random-Banana
13 ups, 6y,
2 replies
Be like bill and don't go on a rampage when you loose
[deleted]
3 ups, 6y
*Lose
XanderM
4 ups, 6y,
1 reply
That-Random-Banana
1 up, 6y,
1 reply
People change
XanderM
3 ups, 6y,
2 replies
He said it on TV! That he believes that sexual assault is innocent and is just a thing people do instead of a crime. So unless people change their views a few weeks after stating them, then we elected the devil's brother for president.
renegade_sith
4 ups, 6y,
2 replies
Actually, Trump said, "they let you do anything if you're a star". If a woman LETS you, that's called consent dumbass.
BlessYourKhakiBritches
3 ups, 6y,
1 reply
As a multiple-time rape and sexual harassment survivor, (victim, target...) and abuse advocate, psychologist, writer, casino dealer (massive sexism and harassment), carpenter and contractor (massive sexism and harassment), ex-Ivy League science major (massive sexism and harassment), and female singer (massive sexism and harassment).... I CONCUR, renegade_sith .

Sorry for the mini rant, lol, but man it gets under my skin.

The difference is HUGE. That was a dick comment for sure, and frankly gross that he does that. But it's not even close, not even on the same planet as being a "rapist" or even a sexual harasser. That whole thing probably pisses me off as a legitimate survivor (and supporter) more than anyone... makes me sick. And I keep getting harassed by so-called (fake) feminists and liberals...it's eerie, I don't even know how they find me (blogs, facebook). And watch, if any of them are on this thread they'll attack me here too. Creepy!
renegade_sith
4 ups, 6y,
1 reply
Sorry to hear about everything you've been through. :( There's a lot of evil people out there and sexism is still a huge problem. It's good that Trump apologized for his comments because they were gross, it just blows my mind how people say he was bragging about sexual assault when consent was implied. When hearing Billy Bush's comments too, to me it seemed like two guys were just trying to 1-up each other and he might have been joking, I don't know though. At least he was talking about a consensual situation if he was serious.

There's a lot of fake liberals and feminists that attack you if you simply disagree with them politically like how they go after a successful female like Tomi Lahren just because she's conservative.
BlessYourKhakiBritches
2 ups, 6y
Yeah that's what it sounded like to me too (one-upping). Thanks for the kind words :) I don't know enough about Tomi Lahren, looking her up!
low rated comment (click to show)
BlueNinja1
1 up, 6y,
1 reply
renegade_sith
2 ups, 6y,
1 reply
You just made all that up. Nice try though dumbass.
low rated comment (click to show)
BlueNinja1
1 up, 6y
That-Random-Banana
1 up, 6y,
2 replies
So you're saying that you'd rather him be a murderer than a sexual assaulter? Because Donald Trump was basically saying that what he did is no where near as bad as doing other crimes. It's bad, but then again so is using a personal email to send classified information.
XanderM
2 ups, 6y,
1 reply
Oh, boo hoo, some emails got sent badly. Well the better alternative for american idiots is to elect the guy who admits to doing sexual assault. I know that sending classified info through your personal email is bad, but treating women like that and making america a hell-hole for women, muslims, and basically anyone who isn't a straight white guy is worse, much worse.
low rated comment (click to show)
BlueNinja1
0 ups, 6y
low rated comment (click to show)
BlueNinja1
0 ups, 6y,
1 reply
That-Random-Banana
1 up, 6y,
2 replies
and how many years ago did Mr. Trump do these things? I'm pretty sure it was a long time ago. He's a different man now and takes his role very seriously. Democrats are just too stupid to realize that. They're better off with Trump than a wood be Ted Cruz president so I've heard. I know that Trump's done some pretty bad things in the past, but now is not the time to argue over these things. Now is the time to propel our great nation forward into the future. "Make America Great Again" - I couldn't agree more!
BlueNinja1
1 up, 6y,
1 reply
I don't are how long ago it was. Wasn't it just like 8 years or something? It wasn't like he was a kid. He's an entitled rich kid who thinks he can get away with grabbing women by their privates without asking their permission. And you fools just handed him the keys to the country. Nice job.
That-Random-Banana
1 up, 6y
I quote "I know I've done some pretty bad things in the past" He's our president and He's a dam lot better than Hillary Clinton would ever dream to be
XanderM
0 ups, 6y,
1 reply
Then you haven't seen on the news that he is okay with his past actions!
That-Random-Banana
1 up, 6y,
1 reply
He knows what he did in the past and he knows that all he can do is accept them. He would be a bad man if he couldn't accept what he did in the past. We would all be bad people if we couldn't accept our past.
XanderM
1 up, 6y
Well he isn't exactly doing that! He isn't sorry for what he did. He won't move on cause he doesn't want to. He is a sexual predator and he is president of the united states!
BallsToTheBar
12 ups, 6y,
1 reply
dh413
15 ups, 6y,
1 reply
Wokadee
7 ups, 6y,
1 reply
Budmemer385
7 ups, 6y,
1 reply
Wokadee
3 ups, 6y
[deleted]
8 ups, 6y
[image deleted]
Show More Comments
Flip Settings

Caption this Meme
Created with the Imgflip Meme Generator
IMAGE DESCRIPTION:
HI... MY NAME IS BILL; I VOTED FOR HILLARY; I UNDERSTAND SHE LOST; I'M NOT GOING TO WHINE OR RIOT; I'M GOING TO WAIT AND SEE WHAT HAPPENS WITH PRESIDENT TRUMP; IF I DON'T LIKE WHAT HAPPENS I'LL VOTE AGAIN IN 4 YEARS; THAT'S THE AMERICAN WAY; BE LIKE BILL
hotkeys: D = random, W = upvote, S = downvote, A = back
Feedback