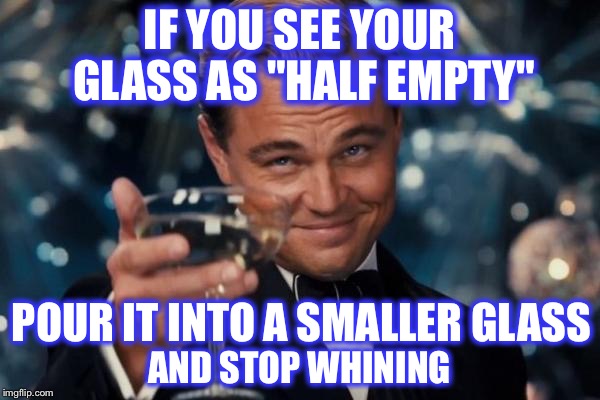 When your cup is half-empty then the cup is being drained. It's halfway to its goal.

When your cup is half-full then the cup is being filled.

Just depends on which way the water is going.

And then there are those who say: this glass is half empty.

The world belongs, however, to those who can look at the glass and say:

‘What’s up with this glass?

This is my glass?

I don’t think so.

My glass was full!

And it was a bigger glass!

And at the other end of the bar the world is full of the other type of person, who has a broken glass, or a glass that has been carelessly knocked over (usually by one of the people calling for a larger glass), or who has no glass at all, because they were at the back of the crowd and had failed to catch the barman’s eye.
reply
[deleted]
3 ups, 5y
reply
anona247
3 ups, 5y
Show More Comments
Flip Settings
memes
gifs
other

Caption this Meme
Created with the Imgflip Meme Generator
IMAGE DESCRIPTION:
IF YOU SEE YOUR GLASS AS "HALF EMPTY"; POUR IT INTO A SMALLER GLASS; AND STOP WHINING
hotkeys: D = random, W = upvote, S = downvote, A = back
Feedback
<![endif]-->