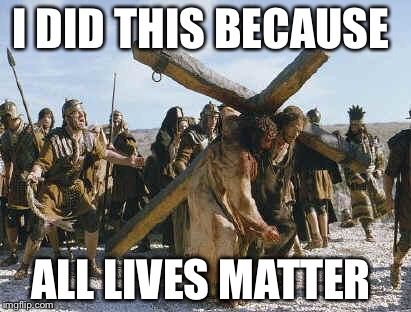 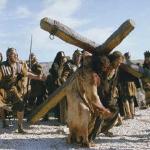 Caption this Meme
Best first
Latest first
Oldest first
218 Comments
O-meme
29 ups, 6y,
5 replies
"For God so loved the WORLD that He gave His only begotten Son that WHOSOEVER believes in Him shall not perish but have everlasting life." (John 3:16)
[deleted]
7 ups, 6y,
1 reply
Most misunderstood word in that verse is SO. Properly translated it means "in the same way."
Nythrius
5 ups, 6y
More properly, "in this way/in this manner", but you're completely correct that this gets misinterpreted as God loves you "Thiiiiiiiis" much, which isn't there in the Greek at all.
H2O
6 ups, 6y,
1 reply
Amen ;D Tbh I don't see why people wouldn't want to believe in all powerful being that loves them like a son (daughter)!
chezyminion
3 ups, 6y
It's usually based off of the people who follow the religion, or the religion's history in my experience. (ex: Crusades,inquisition,religious films being annoyingly closed minded or stupid)Also the amount of conversion theme of the religion might be annoying for nonspiritual people.
chezyminion
7 ups, 6y Darth_Vulcaz
3 ups, 6y
AMEN
low rated comment (click to show)
CorpExecutive
3 ups, 6y,
2 replies
O-meme
13 ups, 6y,
2 replies
Biblical illiteracy: one of the greatest threats to spiritual welfare today. I'll pray for you.
[deleted]
18 ups, 6y,
2 replies
DickMadeIt
9 ups, 6y,
1 reply
Then they too should know no one has gone to "hell"(as in the lake of fire) yet. All souls return to the Father. The parable of Lazarus and the rich man is a good example of what takes place when the flesh dies.
[deleted]
14 ups, 6y,
1 reply
DickMadeIt
12 ups, 6y,
1 reply
Lol that really made me laugh! I know, i know. I just think former atheists and agnostics make the best Christians and can't help myself sometimes.
[deleted]
17 ups, 6y,
3 replies
CoffeeAndBagels
8 ups, 6y,
2 replies
[deleted]
6 ups, 6y,
1 reply
TH3_H4CK3R
4 ups, 6y
OlympianProduct M
4 ups, 6y
You need to submit that, too funny!
occuringisotopeselectronsoutside
7 ups, 6y
John 10:28
I give them eternal life, and they shall never perish; no one will snatch them out of my hand.
[deleted]
4 ups, 6y
Well, it's kinda self-explanatory that former anythings make the best anything-elses. Since they go into it with experience. ;)
O-meme
5 ups, 6y,
1 reply
That's not completely what I meant. Even if you do "study the Bible", if you're not saved you can't understand the word of God. "But the natural man does not receive the things of the Spirit of God, for they are foolishness to him; nor can he know them, because they are spiritually discerned." (1 Corinthians 2:14)
[deleted]
4 ups, 6y,
1 reply
reallyitsjohn
4 ups, 6y,
1 reply
Christianity isn't practiced that way and I know you know better. All are accepted and to the bible is there to guide Christians in their daily life. You don't have read the bible to become a Christian, but in being one the bible will take on a different meaning for you as your perspective has changed. Much the same as once you understand all the mechanical aspects of a car, you change how you deal with car ownership and operation. Think of the bible as Chilton's for Christians :)
[deleted]
3 ups, 6y,
1 reply
reallyitsjohn
5 ups, 6y
CorpExecutive
3 ups, 6y,
2 replies
Ahh, the ad hominem. I'm just a dumb illiterate putz. How "christian" of you. BUT you cannot answer my questions.

1. So what about those he sends to hell because they didn't follow an arbitrary rules he set up?
2. And if he died to pay for sins, why do these people get punished for them in hell? Kinda like double jeopardy ...

And if you want to pray for me, that's great ... but your faith is built on a very shaky foundation because you cannot defend it.

"The power of sin is the law" and WHO gave us that law? Did god HAVE to set up the tree of the knowledge of good and evil? Why did he? He knew Adam and Eve would partake because he built them in his image right? In his image isn't how they looked, it was how they thought and the desires of their heart -- to be in control. The serpent tempted them in the way god made them -- with a desire to be gods, knowing good and evil. How did the serpent know that?

And please don't fall into the trap of "he set it up so he could show his love and forgiveness" ... that's like saying he's an arsonist that gets to put out his own fires and be the hero. We put people in jail for that.

Answer my questions.
O-meme
3 ups, 6y
I didn't call you "illiterate" as in you're unintelligent or "dumb". You called yourself those things. I said that you don't know the Word of God, and from my estimation as someone who does know the Word very well, you don't. I would try to teach you and help you, but it's clear to me and probably everyone else on this site that you're not here to learn. You're here to cause trouble and to antagonize. "Do not give what is holy to the dogs; nor cast your pearls before swine..." (Matthew 7:6)
reallyitsjohn
3 ups, 6y
I'll go ahead and field those for you:

1. Starts with a false premise. God gives everyone the choice of where the responsibility of their own actions will take them "Sending" would be like saying the teacher "gave" me an F instead of I earned that F.
2. "And if he died to pay for sins..." is a form of paying it forward. Its penance for what you did prior to your accepting him. If you never do, than see #1 above, that was your choice.

What is often missed in theological discussions is the simple phrase "free will". It's undeniable that we have that from the day we make our first decision. Even Adam and Eve had free will,
DickMadeIt
6 ups, 6y,
1 reply
No one can follow the law without falling short. MAN asked for the law, God gave it. No one is completely "dead" yet. Hell as you know it does not yet exist and no one will go to "hell" without choosing to. In the end you will have a choice...side with God or side with that loser satan...i don't personally believe many (if any) will choose the loser.
gassed-up
3 ups, 6y,
2 replies
I'm sorry Dick but I don't recognise your interpretation of the whole God/Satan, heaven/hell philosophical paradigm. Can you point me in the direction of some sources or reading material?
Invicta103
6 ups, 6y,
3 replies
No reading material / references will change your mind if you are already convinced there is no God / Satan etc. For any literature sent will be countered by anti-theist literature,.. which leads to flaming. This is one of those memes that resonate with many, based on views / UVs,... and best left alone by those who don't. It's like a political meme,... you agree or don't. If I don't agree,.. I leave it be! =) No sense raining fire down on someones opinion,... best to respect it and leave it alone. (IMHO)
OlympianProduct M
4 ups, 6y
I'm not sure what I believe, so I just try to be the best person I can be. I figure that's the best way to do it
gassed-up
4 ups, 6y,
3 replies
Sorry Mr Invicta but you misjudge me. I'm not "already convinced" of anything. It may not appear so but I do believe in the good that organised religion can do both for individuals and communities I asked our friend Dick for the source of his interpretation because it intrigues me. I have never, as far as I'm aware, deliberately flamed anyone, but, I'm sorry if you use the internet to extol any point of view you must surely expect to be challenged. The day that intellectual discourse stops then it's the end for civilisation, read 1984.
Invicta103
4 ups, 6y,
1 reply
I didn't accuse bro.. or misjudge your comment. I think perhaps my comment was misjudged. Reread my comment bro.. imagine it's in a calm voice.. building off your comment. It's not a counter comment.. I'm just saying that based on any preconceived opinion.. any literature is subject to counter literature. . . And these type memes often flame. You may not have been the one to counter. . Maybe another. I read my comment.. and see where it might be taken differently.. but it was meant as an extentsion only. I don't see your comments as agitative. There is an obvious troll on this thread. .. you bro.. are not. Cool?
gassed-up
3 ups, 6y,
1 reply
Of course we're cool, how can I dislike somebody who is prepared to stand their ground. I will, however, restate the obvious truism: If you espouse an opinion then you must be prepared to defend it. Fear of inciting flamers, trolls, bigots, halfwits, et al should never deter posters nor commenters.
Invicta103
4 ups, 6y
Well,.. hopefully no one fears either of those or we wouldn't be able to meme. =) All memes with any traffic will attract some or all of those. I am trolled as much or more than most,... so I must be doing something right! =)
reallyitsjohn
3 ups, 6y,
1 reply
I dare say 1984 is here, as a meme I made last week stated. Language is a sometime more curse than gift. You and I had a conversation once when by the end we were closer together than we ever imagined at the beginning. Remember your last comment? I remember it now whenever we interact :) “The British and Americans are two people separated by a common language.”
? George Bernard Shaw
gassed-up
3 ups, 6y
Usually attributed to GBS (I think I've been guilty of that one) but probably a paraphrase of an Oscar Wilde line. The English language is a precision instrument that should be wielded like a scalpel, not an axe. That is one of mine but you're welcome to use it.
CorpExecutive
3 ups, 6y,
1 reply
Read Brave New World instead. http://highexistence.com/amusing-ourselves-to-death-huxley-vs-orwell/
gassed-up
2 ups, 6y
I have read Brave New World and Huxley's dystopian vision has many very pertinent warnings about eugenics and genetic engineering that we would all do well to heed. But my mention of 1984 was to highlight what happens when debate and discourse are stifled. Winston Smith's job was to help reduce the English language to 98 key words, making political and philosophical development impossible. I haven't had time today to visit your recommended site but I will do.
[deleted]
4 ups, 6y,
1 reply
Invicta103
3 ups, 6y
Its all about respect and positive trade offs of ideas,... isnt it bro? =)
DickMadeIt
4 ups, 6y
KJV bible and the appropriate corresponding concordance(can't go wrong with Strong) I like to stick with God's word and not traditions of men. E.W. Bullingers companion bible is nice too but i dont much care for his other works.
PCpilot
22 ups, 6y
Grammar_Nazi
23 ups, 6y,
3 replies
nanaskittles
7 ups, 6y,
2 replies
Invicta103
3 ups, 6y
I like this comment a lot... !
Maximus_Ultima
2 ups, 6y
Dunsparce
7 ups, 6y
Yay I'm not the only one
[deleted]
6 ups, 6y,
1 reply
Grammar_Nazi
5 ups, 6y,
2 replies
[deleted]
6 ups, 6y
[deleted]
4 ups, 6y,
1 reply
Grammar_Nazi
5 ups, 6y
Show More Comments
Flip Settings

Caption this Meme
Created with the Imgflip Meme Generator
IMAGE DESCRIPTION:
I DID THIS BECAUSE; ALL LIVES MATTER
hotkeys: D = random, W = upvote, S = downvote, A = back
Feedback