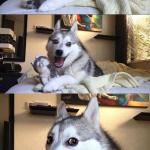 Caption this Meme
Created with the Imgflip Meme Generator
IMAGE DESCRIPTION:
I TOLD MY PROFESSOR THAT MY ESSAY SUBJECT WOULD BE "INFINITY"; HE TOLD ME NOT TO START SOMETHING I COULDN'T FINISH
hotkeys: D = random, W = upvote, S = downvote, A = back
Feedback