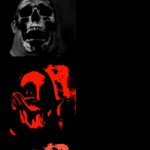 Caption this Meme
Best first
Latest first
Oldest first
26 Comments
CinnaBox
2 ups, 3mo,
1 reply
the pictures make these even creepier
Bbee1949-2_TBCG
1 up, 2mo
i agree
[deleted]
1 up, 2mo
*sad mobile player noises*
Spooky_Artist
1 up, 3mo
Disturbing fact,stage 6: " LisaGaming has lied to many of her fans,and even scammed some.Lisa also isn't banned from the website,despite her actions. "
ChainBreakingCarsStan
1 up, 3mo,
1 reply
idk if flamingo is clean, the darkest thing ik of him is that he had a past yt acc that swore
(he did say badass once)
Caleb_ M
2 ups, 3mo
albertsstuff
orangejuicedood64
1 up, 3mo
damn. this meme looks like a lot of work has been put into it. thats pretty cool.
Bbee1949-2_TBCG
1 up, 3mo
i am the very last one TvT
ZanFerZ
1 up, 3mo
...Wow...
smirkerpuffs
1 up, 3mo
bruh badass is a compliment
Moolu.the.Samsung.smart.fridge
1 up, 3mo
The realistic death system is actually very fascinating
plrelt
1 up, 3mo
the word "wherethan**gas" is un filtered
zenithspeed
1 up, 3mo,
1 reply
i dont understand, how are dance clips beneficial towards many people, they literally turn them into cringe ticktockers
engineergaming419
0 ups, 3mo,
1 reply
for obbys. If they get removed, they will make obbys even harder or even impossible.
zenithspeed
1 up, 3mo,
2 replies
wut? how is that relevant to obbies?
A_Spooky_Imgflip_Silencio.
1 up, 3mo,
1 reply
tsk tsk tsk
A man of no culture i see…

Dance clips are glitches that make obbies easier and help you finish them faster.

For an example, go to a wall, (thats not 1 stud thick. Normally 0.5 stud is perfect) face the wall (make sure your character has no distance from the wall), do /e dance2 and wait till the dance freezes a bit, then immediately shift lock to your side. This causes you to go through the wall. Helped me get to extreme difficulty from effortless easily. If you want a clearer walkthrough, go to https://m.youtube.com/watch?v=8J2gRaYinuo

Anyways, thats the only one left i think. The rest were patched, and it ruined thousands of obbies. So thats why its very benefitial.
zenithspeed
1 up, 3mo,
1 reply
i see
i'm not an obby guy so i don't have too much knowledge on the terminology, though one of my friends did force me to try some obbies but i just gave up near the start because i genuinely suck at them
A_Spooky_Imgflip_Silencio.
1 up, 3mo,
1 reply
mhm
Wait what
Why did you give up at the very start???
What was the difficulty lvl
zenithspeed
1 up, 3mo,
1 reply
idk
when my friend forced me to do that it was like a year ago so my 1 bit memory defo won't be able to remember it
A_Spooky_Imgflip_Silencio.
1 up, 3mo
ok
engineergaming419
0 ups, 3mo
yes
DootDootYeeter
1 up, 2mo
1 is now false. Meepcity is the second result when searching trash
engineergaming419
0 ups, 3mo,
2 replies
Comment a disturbing fact with the phase you want it to be in (Phases 1-23), and yours might be included in the next episode!
Caleb_ M
1 up, 3mo
i read a lot. and i didnt know adoree doxxed someone
Caleb_ M
1 up, 3mo,
1 reply
and i didnt know mobile players are hated
why
Exploding_skeletons
1 up, 3mo
Irdk I can't play dragon ball games and it really pisses me off
Show More Comments
Flip Settings

Caption this Meme
Created with the Imgflip Meme Generator
IMAGE DESCRIPTION:
Mr. Incredible Becoming Uncanny | Disturbing Roblox Facts | Episode 1; If you search up trash on roblox, the first result is Meepcity. There are more teamers, hackers and spam jumpers in combat warriors than mortem mettallum. Roblox might eventually patch dance clips which are beneficial towards many players (let’s hope that doesn’t happen). A person got banned forever for saying "gg" in a game one time. Emote games likes TTD3 were purposely made for roblox tiktoks. You can type badass in chat. Don't search up roblox condos. People who bypass or exploit are less likely to be banned than a false report. If you get scammed, you will get more shammed on then the scammer himself. Roblox is teaching children on how to scam and do these things, it’s not just tiktok. Roblox actually has a realistic death system. If you get decapitated, you die. And if you lose your torso (which is the part that connects all your limbs) You fall into pieces because there is nothing to conjoint them. Roblox doesn't care about its users. They only care about money. People are making "Kill me please, I'm dying from cringe." jokes on Roblox. But what if they actually got killed in real life? Roblox is going downhill. There are free robux scam ads on youtube. People who have roblox characters as youtube profile pictures tend to be more spoiled than other kids. If a game has no activity for 1 year, it increases the chances of the place getting deleted. So, your favorite game that had millions of players when you joined, might've got banned because everyone forgot about it. People made an unofficial package just to online date. The name is R63. Don't google it if you want to save your eyes. Your favorite roblox youtuber might be a pedophile, or worse, a criminal. There was a user on the Roblox forums named jaredpogi123kaba who posted a link on the forums, where upon clicking, you would see images of CP. Lucas gaming roblox might have an alt account. Adorreee is said to have doxxed someone and sent someone to kidnap and kill that said person. Just horrible. Mobile players are the most hated players on Roblox. That includes me.
hotkeys: D = random, W = upvote, S = downvote, A = back
Feedback