You need to fail some tests 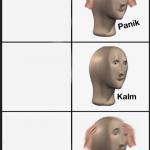 CreeperRoled_EatsaCheemsburger
4 ups, 2y,
1 reply
Blaziken.
2 ups, 2y
Not him! The link to the original!
TheHugePig
1 up, 2y,
1 reply
Which one of these memes would you like a link for? I’ll take a guess and say the bottom one.

Instead of making trash arguments, try and actually prove that it isn’t a repost... except you can’t actually do that because it’s way too obvious about this meme.

Caption this Meme
Created with the Imgflip Meme Generator
IMAGE DESCRIPTION:
You get your test back; You passed; Its a Covid test
hotkeys: D = random, W = upvote, S = downvote, A = back
Feedback