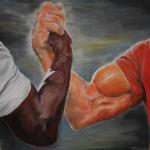 Caption this Meme
Best first
Latest first
Oldest first
14 Comments
[deleted]
0 ups, 9m,
1 reply
I bet you don't know what the word socialism even means!
_ForTheLulz
1 up, 9m,
1 reply
In which respect would you like to know? The thought of socialism is to put social programs first - above all else. Healthcare, government programs, and government control over resources. Don’t believe me? Look at Venezuela - Hugo Chavez took that country from one of the wealthiest countries and destroyed it. How? With failed social programs and government confiscation of their oil reserves. Pushed companies completely out of their oil production and now they are so dead in the water that they have to IMPORT oil. Sad.

You guessed it - capitalism.

So keep on being uninformed about socialism by your really smart socialist professors in school - because they know A LOT. They talk like they are “anti-capitalism” - but then hop on their iPhones to post how bad capitalism is on Twitter.
[deleted]
0 ups, 9m,
2 replies
I'm not reading that. too many words most likely bullshit. F**k you.
_ForTheLulz
1 up, 9m,
1 reply If you didn’t you wouldn’t be all over my meme pages attempting to be clever. Failed miserably I may add. Just digging yourself a hole to lay in. I don’t even have to say a word. I love it.
[deleted]
0 ups, 9m,
1 reply
_ForTheLulz
1 up, 9m,
1 reply
Go back on your meme page - and please enlighten me with a bit of information - be honest.