1,015 views • 44 upvotes • Made by PopeVinzClortho 2 years ago in politics
dumpster fire 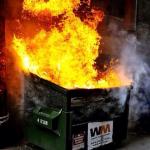 This meme has only been done about 500,000 times already
[deleted]
0 ups, 2y
Ladies and Gentle men, We got Him.
YEEEEEEeeoreos
1 up, 2y,
2 replies
I think you mispelled republican my dear-deviant liberal.


and you misspelled misspelled (buahahahahahaha)
YEEEEEEeeoreos
0 ups, 2y,
3 replies
dude. It autocorrected ONE letter. No need to go calling to the goodamn queen of London!

You republicans really are immature
DanSmith8
1 up, 2y,
1 reply
buahahaha....just pointing something out. No need to melt.

You tell me to get a brain but your the one saying that I'm saying nothing? Anyone that has the mental capacity of a 6 year old would know that I am saying that you lost because you arent trying to disprove me"

That you're [note the spelling] totally oblivious to your [note the spelling] bad grammar is such a joy.
ItSeemsTheFloorHereIsMadeOfFloor
0 ups, 2y,
1 reply
i dont waste time perfecting my grammar on idiots, when someone makes a solid point with evidence and they keep defending their point, then i will use proper grammar more because it is an actual argument and not just me trying to get a cultist to change their mind. I only misspelled one word, and I misspelled it by forgetting to put an apostrophe at aren't. Also, you did misspell misspelled and you cant blame it on autocorrect because autocorrect always corrects words correctly, just admit it.
VagabondSouffle
1 up, 2y,
1 reply
That's because you wouldn't know how, being a raging simpleton.