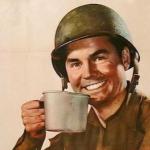 I've been voting independent for the better part of four years as a result. I tend to do this when I'm happy with the Republican choice but that use to be so rare. I wasn't terribly happy with Bush Jr. after his second term but I was more confident in his results rather than his ability. I also thought his father deserved a second term, after all. And though his economic plan was a disaster, I was really hoping he'd reverse course on it in his second term. He didn't. I was really hoping Trump and his ilk would prove me wrong but when his economic plan matched Bush's from 2000. Well, to quote W. Bush...

"Fool me once, shame on...shame on you? You fool me, you can't get fooled again."
reply
CharlesHobby
3 ups, 2m
Considering that Trump is simply using the legal mechanisms set up BY the Constitution and supported by laws based on the Constitution, it begs the question whether any Trump-haters actually do comprehend the Constitution. The answer to that question is apparently . . . no.
reply
[deleted]
2 ups, 2m,
1 reply
reply
lokiare
1 up, 2m
?
Show More Comments
Flip Settings
memes
gifs
other

Caption this Meme
Created with the Imgflip Meme Generator
IMAGE DESCRIPTION:
WHAT WITH THE GOP CONGRESSMEN ALL MORE LOYAL TO TRUMP THAN THE CONSTITUTION; IT'LL BE A COLD F***ING DAY IN HELL BEFORE I VOTE FOR ANOTHER REPUBLICAN
hotkeys: D = random, W = upvote, S = downvote, A = back
Feedback
<![endif]-->