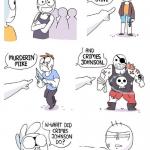 But I’ll try my best...
“Take 1 second to do something...”
I’m assuming you’re talking about upvoting.

“That doesn’t do anything to hurt them.”
It doesn’t hurt him to scroll down either. Memes aren’t about upvotes. They’re about humor. The fact that people upvote is a bonus.

“And the person completely deserves it.”
If the viewer laughed, maybe he does, and if he doesn’t get the upvote, he can take the L and try again later with another meme.

“And being mad about it.”
That’s the dangerous part. Like I said, there’s no reason to be mad that you’re not receiving upvotes... even if your memes are good.
If you’re mad about it, you’re begging no matter what your memes are like.

Complaining about upvotes is upvote begging.
DogeAddict43
0 ups, 2y
u idiot its not
[deleted]
0 ups, 2y,
1 reply
He is not mad that he is not receiving upvotes, he is mad people don't do extremely easy stuff for no reason, maybe he is wrong but that is not upvote begging. And also what do you mean that you can't answer me because I did not put commas and not capitalizing the beginning of a word?
TheHugePig
0 ups, 2y,
1 reply
Did I actually answer it well? You’re lucky I can decipher that. And yes, proper punctuation matters.

You just said he was mad about it in the last comment. And if you need more evidence, just look at the title.