I guess humor is subjective. 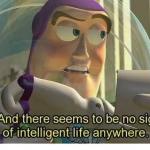 And if your premise is “if you view a meme you should upvote it,” I’ll just laugh my head off. People can upvote whatever they want whether they laugh or not.

And if it matters that much to you, just know that upvotes are the most irrelevant part of a meme. Making the front page is irrelevant. That’s why I put quotation marks around the word “failure.” Because it isn’t a failure that you didn’t make the front page. The failure is you thinking it matters. What really matters is the fact that you shared your created memes for people to see.
dprises
2 ups, 2y
making it to the front page gets more people to see it and at the end of the day makes you feel good about yourself, i mean, you made so many people laugh at your joke it hit front page
The_Last_Doge
2 ups, 2y,
1 reply
im also just saying if half the people upvote the upvotes be going to 8k im not saying everyone should upvote
[deleted]
2 ups, 2y,
1 reply
Ok good because I would actually laugh. But that’s still kind of a funny argument.

Caption this Meme
Created with the Imgflip Meme Generator
EXTRA IMAGES ADDED: 1
IMAGE DESCRIPTION:
WHEN YOU CREATE A FUNNY MEME ON IMGFLIP AND YOU GET NO UP VOTES
hotkeys: D = random, W = upvote, S = downvote, A = back
Feedback