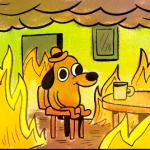 reply
VagabondSouffle M
1 up, 2m,
1 reply
Is it just me, or is this like Murder She Wrote where she just happens to be at every scene of the disaster?
reply
SydneyB M
2 ups, 2m,
2 replies
lol didn't watch that. Use to think Matlock and MSW were geriatric sedatives
reply
VagabondSouffle M
2 ups, 2m,
1 reply
I might have caught a couple of episodes.

But here's the basic plot: Angela Lansbury plays this mystery novel writer, and attends parties and other such assorted gatherings about once a week (just in time for tonight's episode!). During the festivities, someone exits prematurely, and due to her expertise, she sleuths away, eventually finding the killer. That's the plot. OF EVERY SINGLE EPISODE!

So I quipped for years that one day someone will notice that these murder scenes have a second thing in common, and the show's finale will end with the grand realization that she's the biggest serial killer in history since Che Guevara, only less likely to be featured on edgy rebellious trust fund college kids' tee shirts.

THE END
reply
SydneyB M
1 up, 2m,
1 reply
So just like Perry Mason, where he breaks down every defendant into confession? lol

So people just have evil vibes. I know a guy that knows a guy who's gf told him Angela eats babies.
reply
VagabondSouffle M
1 up, 2m,
1 reply
I don't recall watching that show.

hahaha, Quincy, M.E. goes investigate his cadavers' deaths. Another satisfied client!.
Pretty sure I only saw the Punk Rock episode, but was familiar enough to know SCTV got it so spot on,,,
reply
SydneyB M
1 up, 2m,
1 reply
Neither did I but that was the joke. I have no idea why I know that.

I have to say, the Rockford Files was pretty good for it's time. The early to mid 80's were the absolute worst.
reply
VagabondSouffle M
1 up, 2m,
2 replies
The Rockford Files was the greatest, always been in my Top 3 (which is kinda more than 5 shows, but it's there).
reply
SydneyB M
1 up, 2m,
1 reply
You mentioned that but it was more nuanced then your friend led on. After all, Norman Lear was a leftist.

It was a very yelly type of show, always screaming but those two leads were accomplished stage actors, of a degree rarely seen on TV in a sitcom. She didn't sound like that in real life at all.
VagabondSouffle M
1 up, 2m
Yeah, we discussed this last year. Forgot how much detail I said.

Thing is, that dope thought it was designed to be that way, racist by intent. He didn't get it that it was framed to make him look like a ridiculous backwards bigot.

This was kinda a low brow neighborhood. I mean, crap, I wasn't the brightest either, mind you, but you'd get some of them asking me to explain things to them like I was a know-it-all (I was into science and stuff and was stuck with them Clark Kent dork/bookworm glasses way before they were cool). Now THAT'S sad.
reply
SydneyB M
0 ups, 2m,
1 reply
I think it was kinda like All in the Family. Gartner and Carroll O'Connor and Jean Stapleton were all amazing actors. In that sense.
VagabondSouffle M
1 up, 2m
Wait, what? eww, no,,,

I found All in the Damily (TYPO!) to be utterly depressing, the theme music to the cast.
Plus this kid down the block (that my ma selected to be muh bestie and I couldn't stand) loved it because he thought it was legit straight up racist, like a Don Rickles drama (with a laugh track), hahaha. Ok, we were young, but good gosh, kid, like get a brain.