the entire liberal and progressive theme is based on a unbalanced mental state. 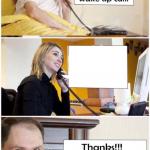 ok,let's put your brain-addled retardation aside,and assume the basic premise you are badly trying to make.

premise:liberalism and progressivism are a mental disorder.
^this is a smear against those who may adhere to this political philosophy as being mentally ill,and not a "point".

your premise: I should acknowledge this smear as a valid point,and do something about it.

which is just...dumb.
but I suspect you are oblivious to this fact,so allow me to help you out.using the EXACT same internal logic:
1.evangelical conservatives are really neo-crypto-fascists seeking a Christian ethno-fascist state.they suffer from delusional thinking,and we should do something about it.

see? it is an intrinsically stupid statement.
no matter how you change the focus,it is the epitome of lazy,infantile thinking attempting to engage in a substantive rhetorical style.but it ultimately fails due to it's own broken internal logic.

as for your second panel.
well..
this just solidifies that you are kinda dumb.
it assumes two things not in evidence.
1.i was "smearing" the op,when I was simply calling him out for the bad rhetoric.
2.that the op is smearing me.which would make the presumption I am a liberal.
of which I am not.

is there anything else you would like to discuss today?
if not,
I will be here all week folks!
don't forget to tip your bartenders and waitresses,and thanks for coming out!
toodles.
reply
TheDS
0 ups, 3m,
1 reply
Here's how it happened -
OP: said something
You: smeared OP by accusing him of smearing you
Me: pointed it out
You: in denial of what you did, goes on long, completely unrelated tirade no one will ever read
Me: pointing it out