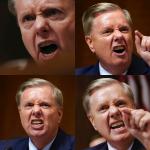 reply
MichaelRichey
4 ups, 5m,
1 reply
Subpoenas can be legally challenged. It's this little thing called "due process" and it's one of the bedrocks of our legal system.

Pelosi and the Democrats want subpoena powers without holding a vote on impeachment. If they hold a vote, then Republicans get subpoena power too - and they don't want that.
reply
Pascalean
4 ups, 5m reply
damagedgood
4 ups, 5m,
1 reply
low rated comment (click to show)
reply
darko_yolo
0 ups, 5m
reply
calronmoonflower
2 ups, 5m
It depends on what they ask for and the authority behind asking for it.
reply
darko_yolo
1 up, 5m
Before Trump became president Lindsey Graham straight up said he was a kook, unfit for office, and did not represent the Republican party.... Paul Ryan called his comments "textbook racism".... McCain was obviously not a fan.... Now look where we're at. If you're a repub who doesn't support Trump 100% you're a RINO. Trump owns the Republican party.
I think it will be interesting to see what happens to their party in his wake.
reply
damagedgood
0 ups, 5m
Stupid ass trumpturd can't let easily verified FACTS disturb their stupor
Show More Comments
Flip Settings

Caption this Meme
Created with the Imgflip Meme Generator
IMAGE DESCRIPTION:
A PRESIDENT WHO DOESN'T COMPLY WITH CONGRESSIONAL REQUESTS FOR INFORMATION IS SUBJECT TO IMPEACHMENT.
hotkeys: D = random, W = upvote, S = downvote, A = back
Feedback
<![endif]-->