You can help or ignore the needs of others-pick wisely 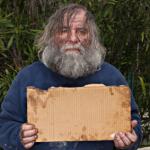 reply
BurntFingerForge
1 up, 2y,
1 reply
Some are lazy but some are just unlucky, most people are closer to being homeless than they realize.
reply
regularfeller
0 ups, 2y,
1 reply
Not saying you're wrong i simply don't agree. Except for the last part, people have their priorities messed up and waste money on wants before the necessities are attended to and put themselves n predicaments..
reply
BurntFingerForge
1 up, 2y,
1 reply
I agree, there are many more that fail themselves and addiction ruins them but I have known the other type too. The ones that had it all and one business closed and the next and the next and everyone is out and with out one or two checks homeless. The lucky ones have family to draw on, to help move and rebuild, some don't and never do rebuild.
reply
regularfeller
0 ups, 2y,
1 reply
Fair enough. Consider this:

I read about the San Francisco homeless crises and how the city is struggling with how to fix it. Said they've budgeted something like $270+ million dollars last year to manage approximately 8000 individuals. Therein lies the problem. There are more homeless this year and conditions didn't improve for either the homeless on an individual level or the city despite spending around $36,000 per homeless person. $36,000 PERSON ! Where'd the money go? It would have served people better had they just handed out bags with $36,000 in them. But you can't do that. Imagine the hordes that would invade - anyone making less than $36,000 at their JOB would be there too. San Francisco gives us our first real life, down home, Main Street, USA, glimpse of socialism.

Truth, the ELECTED custodians of the public funds and interests have allowed, no, created, a city to act as an addict haven and littered their streets with heroin zombies and their waste products (feces, urine, trash, needles). More ugly truth, if you can't get off the junk and you're going to consume without ever contributing that makes you a parasite. How do you help a parasite not be a parasite? A tick not be a tick? A liver fluke to be an asset to your physiology? You can't. You can only make the host inhospitable.
reply
BurntFingerForge
1 up, 2y,
1 reply
I see your point and you are right, I have no clue how to help those that that do not want it but I don't mind giving to someone that can improve and will work for it.
reply
regularfeller
1 up, 2y,
1 reply
Well those people are easy to identify, they're not sitting around with cardboard signs begging
reply
BurntFingerForge
0 ups, 2y,
1 reply
True enough, the ones in congress wear really nice suits
reply
regularfeller
1 up, 2y
and the voters keep the lazy, do nothing, freeloaders sitting there living off the sweat of others
Show More Comments
Flip Settings
memes
gifs
other

Caption this Meme
Created with the Imgflip Meme Generator
IMAGE DESCRIPTION:
HOW MANY PEOPLE THAT NEED HELP WILL YOU IGNORE TODAY?
hotkeys: D = random, W = upvote, S = downvote, A = back
Feedback
<![endif]-->